On the Fourth of July, fireworks and sparklers won’t be the extent of the excitement. To ring in the holiday, as well as celebrate in their own way, Game Changer Wrestling will hold its third-ever tribute event to backyard wrestling. This tradition began in 2019, which saw GCW mainstays and battle-tested backyard wrestlers alike compete under the same banner. The original event was such a hit with fans that it sparked an annual tradition for the independent wrestling powerhouse. This leads us to this Sunday, appropriately enough on Independence Day, when GCW Backyard Wrestling 3 will take place.

What makes the event more special is that certain wrestlers will use their old backyard wrestling personalities. In years past, fans saw Joey Janela work under his “Kid Suicide” persona and Nick Gage wrestle as “Hardass Nick,” just to name a few examples. Needless to say, this should take longtime indie wrestling fans back. Even for those that haven’t followed the careers of these men, dating back to their backyard wrestling days, it should serve as an entertaining time capsule of sorts. What does the company have planned this year? Here’s what to know heading into GCW Backyard Wrestling 3. 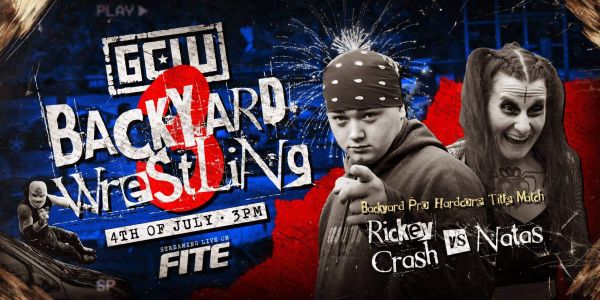 The importance of backyard wrestling to the career of Rickey Shane Page can’t be denied. According to Page himself, he met Atticus and Otis Cogar – we will get to them later – at a backyard wrestling show. He would go on to befriend the brothers before inviting them to train with him. This helped establish the groundwork for the 44OH, which Page continues to lead to this day. Speaking of Page’s backyard wrestling experience, “The Midwest Martyr” wrestled under the name of Rickey Crash once upon a time. This Fourth of July, at GCW Backyard Wrestling 3, the character in question returns as he takes on an old ally and foe alike.

“The Wild Child” Jody Threat is one of the most recognizable independent wrestlers to come out of Canada. Her days in wrestling date back to the early 2000s, when she wrestled under the character of Natas. The character in question was especially prominent in Defiant Pro Wrestling and Diamond Championship Wrestling; the latter is where she became the second DCW X Champion. Since then, Threat has become quite active on the independent scene, not only in GCW but, in the past month, Limitless Wrestling and IWA Mid-South. This Backyard Wrestling 3 showdown marks the first time Page and Threat have wrestled one another since Horror Slam Wrestling‘s Hellrazor event back in October of 2019. Expect a similar level of chaos come Independence Day. 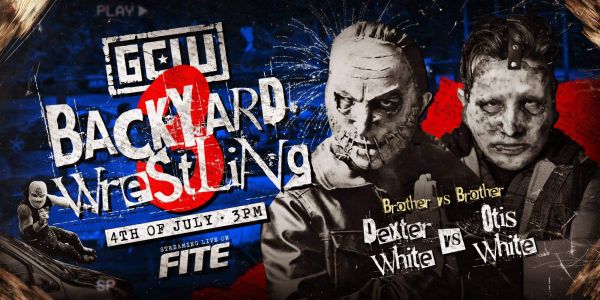 Before he was a member of the nefarious 44OH faction, Atticus Cogar trained and wrestled alongside his older brother, Otis Cogar. The Cogar Brothers, as they were known collectively, thrived on violence and mayhem. From MEGA Championship Wrestling to Ohio Championship Wrestling, the two brothers made headway in their home state. They would also become two-time tag team champions during their time on the independent scene. While the younger brother Atticus went on to build his career, especially as one of the most prominent competitors in GCW, the elder brother Otis continued to wrestle from state to state, largely independent from his brother. At GCW Backyard Wrestling 3, they will adopt their previous backyard wrestling personas, Atticus as Dexter White and Otis as Otis White.

This singles match is notable for a few reasons. First, it marks the first time that the two brothers wrestled one another in a singles match in over two years. Their previous one-on-one bout took place in December of 2018 at MCW’s MEGA 20th Anniversary event; Atticus would defeat Otis in a Fans Bring the Weapons Match. Second, the last time that Atticus dusted off his Dexter White gimmick was, coincidentally, at last year’s Backyard Wrestling 2 event. Anyone that’s familiar with the work of The Cogar Brothers will attest to the ultraviolent nature of their matches. Needless to say, viewers should expect nothing less heading into Backyard Wrestling 3.

An Angel Counts a Cat’s Lives

If GCW fans have been following the recent revival of Jersey Championship Wrestling, they are undoubtedly familiar with Marcus Mathers. The 26-year-old Mathers teamed with Dyln McKay at not just JCW Opening Day in May but After Hours the following month. As the self-proclaimed “Young Prodigy,” Mathers is just as confident as he is high-flying. What fans may not know about him, however, is that he once went under the Darc Angel persona during his time as a backyard wrestler. At GCW Backyard Wrestling 3, he will go back to his roots, embracing and taking on the mantle once more. As Darc Angel is, as the name suggests, a personification of darkness, his opponent is that of light, albeit one with an affinity for a certain favorite Italian dish.

This isn’t Shotzi Blackheart – this is Pizza Cat Jr. Under the pizza-themed mask is the young, up-and-coming star known as Billie Starkz. Though she’s only been wrestling for a short period, Starkz has made considerable noise on the independent scene. Her work in JCW and GCW-branded events, which saw her take the likes of Allie Kat and Starboy Charlie to their limits, exposed her to the largest audience she has seen yet. It’s important to note that Starkz hasn’t wrestled under the guise of Pizza Cat Jr. since October, when she bested Blair Onyx at Girl Fight Wrestling‘s Night of the Living Girl Fright. Will GCW Backyard Wrestling 3 be the cat’s day or will it be the Darc Angel that claims a victory for himself? Tune in this Sunday to find out.

Stay tuned to the Last Word on Pro Wrestling for more on this and other stories from around the world of wrestling, as they develop. You can always count on LWOPW to be on top of the major news in the wrestling world, as well as to provide you with analysis, previews, videos, interviews, and editorials on the wrestling world. GCW Backyard Wrestling 3 is set to air Sunday at 3 PM EST on FITE. This is an invite-only event.