It’s been nearly five years since Jersey Championship Wrestling (JCW), the New Jersey-based indie promotion founded by Ricky Otazu, held its final event at Six Flags in Jackson, New Jersey, where NJPW‘s Tama Tonga defeated Joey Janela for the JCW Heavyweight Championship. Soon after, Ricky O sold the promotion to Brett Lauderdale, and a few months later, it relaunched as Game Changer Wrestling (GCW). Since then, GCW has far surpassed JCW with its influence in the current landscape of the U.S. indies. In March, GCW announced the return of Jersey Championship Wrestling as a new brand under the GCW banner.

Much like JCW in its early days, this rebooted brand will act as a showcase for younger talents and rising stars, acting as a way for GCW fans to get to see more of the young talents who may only get seen in GCW in scramble or multi-wrestler matches. The debut show will air this coming Saturday, May 1, as the opening act of a double-header with GCW, with JCW Opening Day kicking off at 3 pm EST, before GCW’s Ashes to Ashes later that night. But while GCW will be airing on its usual home on FITE, Jersey Championship Wrestling will be airing completely FREE on GCW’s YouTube Channel. Here’s a rundown of JCW’s first card since June of 2015. 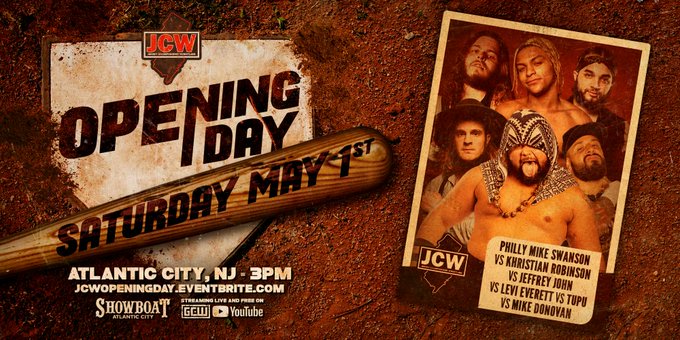 A lot of new faces to the GCW realm will appear in this six-man scramble match. Philly Mike Swanson is a four-year pro out of Philadelphia who is building his brand, while Khristian Robinson has been a top prospect with Combat Zone Wrestling (CZW) in CZW Dojo Wars since 2018. Jeffrey John has appeared recently for Paradigm Pro Wrestling‘s UWFi Contenders series on IWTV, while Solomon Tupu is a big tough Samoan who has appeared for IWA Mid-South, AAW Pro, and made his GCW debut this past January at GCW Fight Forever.

Levi Everett has become a cult favorite on the U.S. indies in a way that is reminiscent of Orange Cassidy about five years ago. The Amish grappler has found an incredibly unique and well-performed gimmick that has struck a real chord with indie fans – like Cassidy, his charisma often overshadows just how really good he is in the ring. The final member of the match is actually a JCW Original – Mike Donovan is an 18-year veteran of the New York/New Jersey indie scene, and is a former American Championship Entertainment (ACE) Heavyweight Champion in Union City, New Jersey. Donovan competed for JCW in 2014 and last appeared for the company in GCW’s early days of the rebrand in 2015. 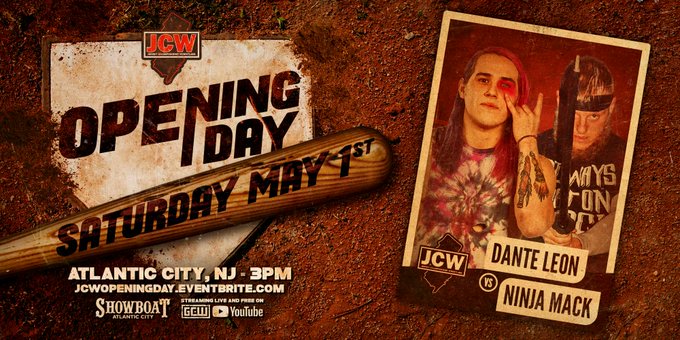 Dante Leon is another Texas product and pupil of Seth Rollins at The Black & The Brave Academy, and has been a rising star in the Iowa scene over the past few years. He’s finally starting to bust out nationally, working for AAW Pro, Freelance Wrestling, and Violence x Suffering (VxS), and made his GCW debut this past April at GCW Jimmy Lloyd’s D-Generation F as part of The Collective over WrestleMania Week. His opponent also made his GCW debut during The Collective and after that week, more indie fans were suddenly made aware of how special and innovative Ninja Mack could be. He’s been working with Loko Wrestling in Texas, where he’s quietly had big bangers with Mexican luchadors like Aramis, Dragon Bane, and Aéreo de Juárez. This is a dark horse to potentially steal the show. 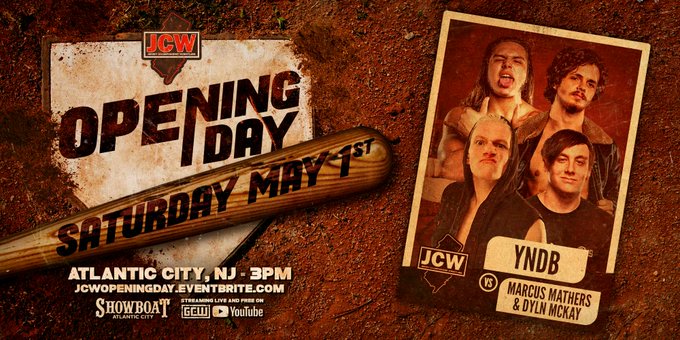 One of the U.S. indies’ more underrated teams is Young Dumb N’ Broke (YDNB), a faction that also features Jordan Oliver in its camp. The two representing the group will be the duo of Charlie Tiger and Ellis Taylor, who are tag team champs in their own right – the two are the current reigning AWE Tag Team Champions out of Atlanta Wrestling Entertainment (AWE). YDNB has appeared in GCW many times, but are often overshadowed by the meteoric success of Oliver over the past two years – getting a chance to properly shine on their own in JCW will go a long way in increasing their profile. They’ll be facing off against two of the top prospects out of Matt Tremont‘s Hardcore Hustle Organization (H2O) in Marcus Mathers and Dyln McKay. Both men have immense futures ahead of them and this will be a ferocious match featuring four young talents looking for a big breakout in 2021. 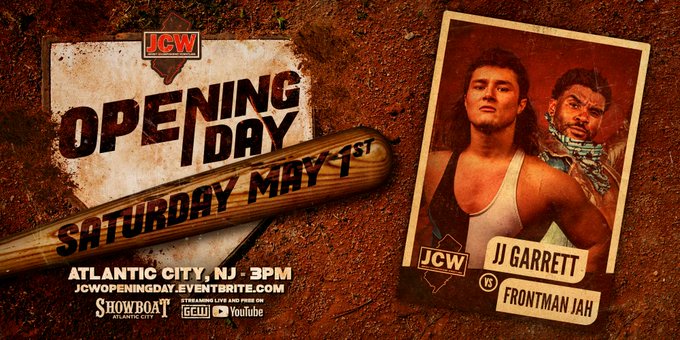 JJ Garrett is a near 10-year pro, starting out in his home state of Iowa before breaking out into promotions like IWA Mid-South, Beyond Wrestling, and AAW Pro. Over the next few years, he became a staple on the Midwest indie circuit, adding the likes of DREAMWAVE, Freelance Wrestling, Pro Wrestling ZERO1 USA, Glory Pro, and Zelo Pro Wrestling to his travels. Long considered an underrated talent, the past couple of years has seen his profile finally reach a national audience with his GCW appearances, capped off by his All Elite Wrestling (AEW) debut on AEW Dark this past February. Formerly known as Jah-C, Frontman Jah is another Iowa indie star and student of The Black & The Brave. He’s been a regular with Iowa’s SCW Pro as well as IWA Mid-South, Minnesota’s F1RST Wrestling, and many more, and he also made his GCW debut this past WrestleMania Week. 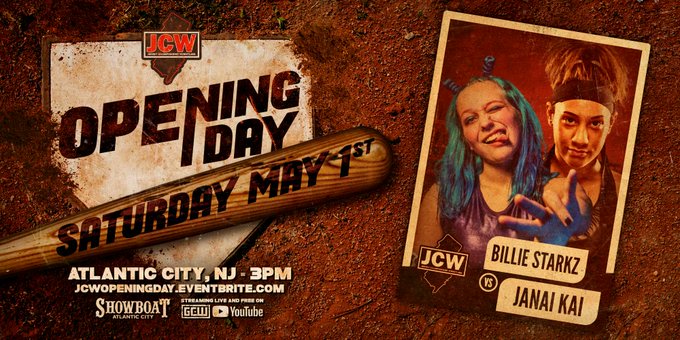 Billie Starkz is an absolute workhorse who has not only put in the work but made a name for herself with the likes of Paradigm Pro Wrestling, St. Louis Anarchy, Black Label Pro, ACTION Wrestling, New Texas Pro, and GCW. Starkz is poised to be one of the breakout stars of 2021 and she’s still a teenager. Janai Kai has only been wrestling for a couple of years herself, trained by NXT Superstar Santana Garrett and Puerto Rican indie star MechaWolf, but she’s already proven she’s as tough as they come. She’s become a regular with PPW on their UWFi Contenders series and made her GCW debut at the most recent edition of GCW Josh Barnett’s Bloodsport. Keep your eyes on both these women, as they’ve both got incredibly big futures ahead of them. 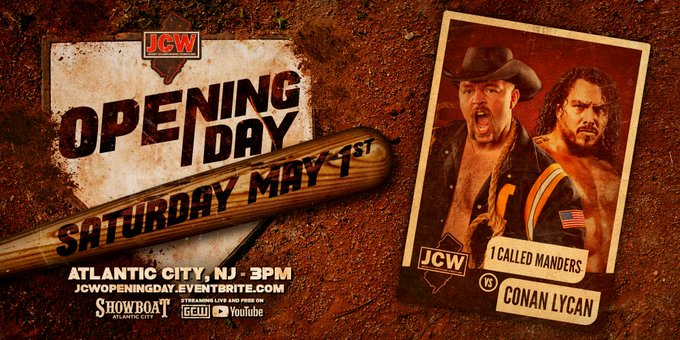 Conan Lycan is yet another Black & The Brave student on the card and made a name for himself with SCW Pro, as well as in New York with New York Championship Wrestling (NYCW), where he’s part of The Family of Freaks stable. He made his GCW debut this past January at GCW Fight Forever during the After Hours block and returned for WrestleMania Week. He’s back once again, this time facing one of Iowa’s biggest breakout stars of the past year or so in 1 Called Manders. One of the members of the Second Gear Crew (alongside Matthew Justice, AJ Gray, Mance Warner, and EFFY), Manders has been fighting all over the place the past year, with Black Label Pro, SCW Pro, Glory Pro, AAW Pro, Southern Underground Pro (SUP), No Peace Underground, and much more, taking on all challenges. 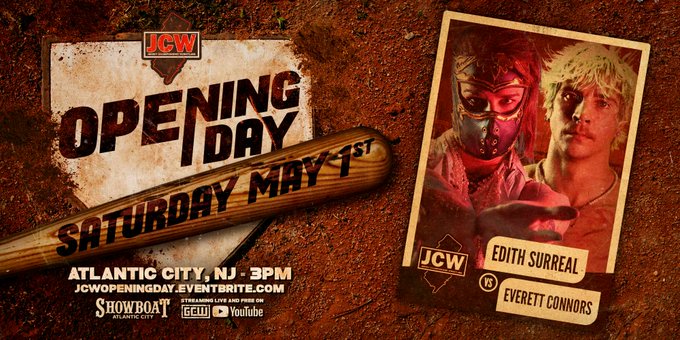 Another of 2020’s many break-out stars was Edith Surreal (formerly known as Still Life With Apricots & Pears). A trailblazer in the exploding LGBTQ+ scene, she was arguably CHIKARA’s brightest young star in the promotion’s final year of existence, where she went 18-2 in 2019 and won the 2019 Young Lions Cup Tournament. Since CHIKARA’s demise, she has become one of the principal stars of Camp Leapfrog and made her GCW debut at GCW EFFY’s Big Gay Brunch at last October’s Collective, where she had a Match of the Year candidate with Dark Sheik.

Surreal also competed for the likes of Hoodslam, Beyond Wrestling, Black Label Pro, and Freelance Wrestling, and this past December, she teamed with Boomer Hatfield & Molly McCoy to win the Camp Leapfrog Christmas Trios tournament. This past April, she won the inaugural Cassandro Cup tournament, adding to her tourney trophy case. A regular star with St. Louis Anarchy, Everett Connors exploded earlier this year when he faced Joey Janela in his GCW debut at GCW Fight Forever. Despite taking the loss, a whole new audience saw just the kind of potential Connors has. Two stars on the rise in 2021 are set to clash in a great match-up. 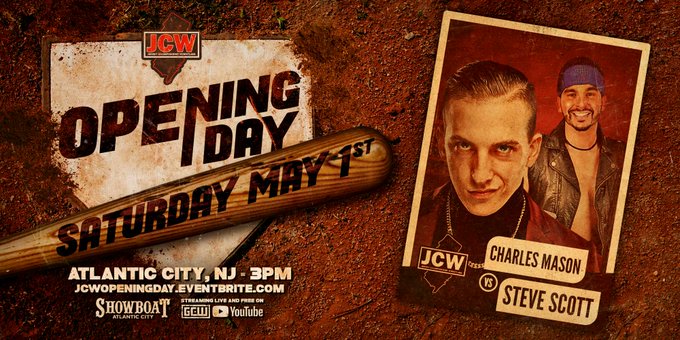 Charles Mason has been honing his craft for a few years now, with the likes of House of Glory, Pennsylvania Premiere Wrestling (PPW), and Paradigm Pro Wrestling, but his recent transformation into an “American Psycho” style sadistic serial killer with a taste for the finer things in life has caused his stock to rise substantially. “The Root of All Evil” is set to take on a familiar face for long-time JCW/GCW fans, in the return of former GCW Extreme Champion “2 Hot” Steve Scott.

Trained by Jay Lethal, Steve Scott is a 15-year veteran who was a regular with New Jersey’s National Wrestling Superstars (NWS) from 2009 to 2012, before joining JCW in 2013. He was one of the JCW stars who transitioned over to the new GCW in 2015, before leaving in December of 2016. He made a triumphant return to GCW this past January, appearing at GCW 56 Nights and then GCW Fight Forever, and now he returns to Jersey Championship Wrestling for its first card since 2015. 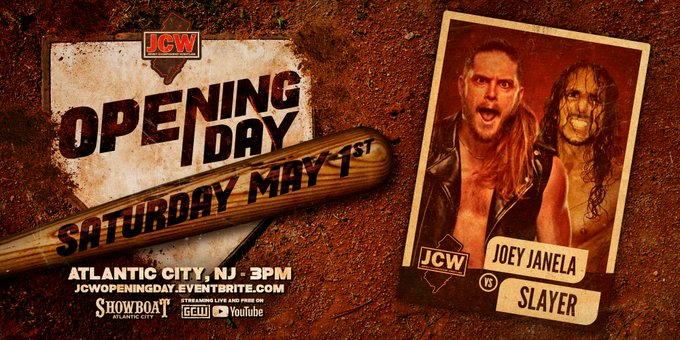 Joey Janela’s name is near synonymous with GCW at this point, having appeared regularly with the company since its rebranding in 2015. The AEW star continues to work for GCW, and actually started with the company when it was still Jersey Championship Wrestling, debuting with them in 2014 (like Steve Scott, he also came over from NWS). During his time in JCW, Janela won the JCW Tag Team titles (now GCW World Tag Team titles) alongside Sean Waltman (X-Pac) and defeated Devon Storm in December of 2014 to win the JCW Heavyweight Championship, which he held for 204-days before losing to Tama Tonga on JCW’s final show.

Janela will be facing the most OG Jersey Championship Wrestling star on the card, in the form of near 25-year veteran Slayer. The latter debuted with JCW in 2003 in its early days and returned in 2015 as the company transitioned to GCW, where he remained until December of that year. Slayer has continued to work for many area indies since then, but on Saturday night, he returns home to JCW once again, in a huge battle of two former JCW legends.

Stay tuned to the Last Word on Pro Wrestling for more on this and other stories from around the world of wrestling, as they develop. You can always count on LWOPW to be on top of the major news in the wrestling world, as well as to provide you with analysis, previews, videos, interviews, and editorials on the wrestling world. JCW Opening Day will air at 3 pm EST on GCW’s YouTube Channel, followed by GCW Ashes to Ashes at 8 pm EST on FITE.