For nearly 20 years, CHIKARA was a magical place, until recent allegations against founder Mike Quackenbush shut the promotion down. And with the news and subsequent closing, a magical kinship between the CHIKARMY (the CHIKARA fan loyalists) and the characters within the promotion was one of astounding respect. For years, the identities of many of the company’s masked characters were kept secret – many top indie stars portrayed new personas under lucha masks. But like any secrets in pro wrestling, they would ultimately be uncovered. But for the near two decades, the CHIKARA faithful kept mum about what they found out, and with CHIKARA just being indie enough to avoid most news sites, they were never looked into with much scrutiny. But with the recent closure of CHIKARA, the magical wall has collapsed, and many wrestlers are now confessing to their secret characters or fans are finally opening one of pro wrestling’s biggest Pandora’s Boxes of the past two decades. Perhaps one of the most unlikely stars to break out who had an alternate identity in CHIKARA is that of “Freshly Squeezed” Orange Cassidy of All Elite Wrestling (AEW). For in the early days, one would have expected his more athletic character Fire Ant to be the future superstar, and that the Clown Prince of Lethargy we all know and love so well would fade away as a cult figure. But as the landscape opened up in the past few years coinciding with the indie boom around the world, it was Cassidy who emerged as the hero we all needed, and Fire Ant may now be a part of pro wrestling’s past. 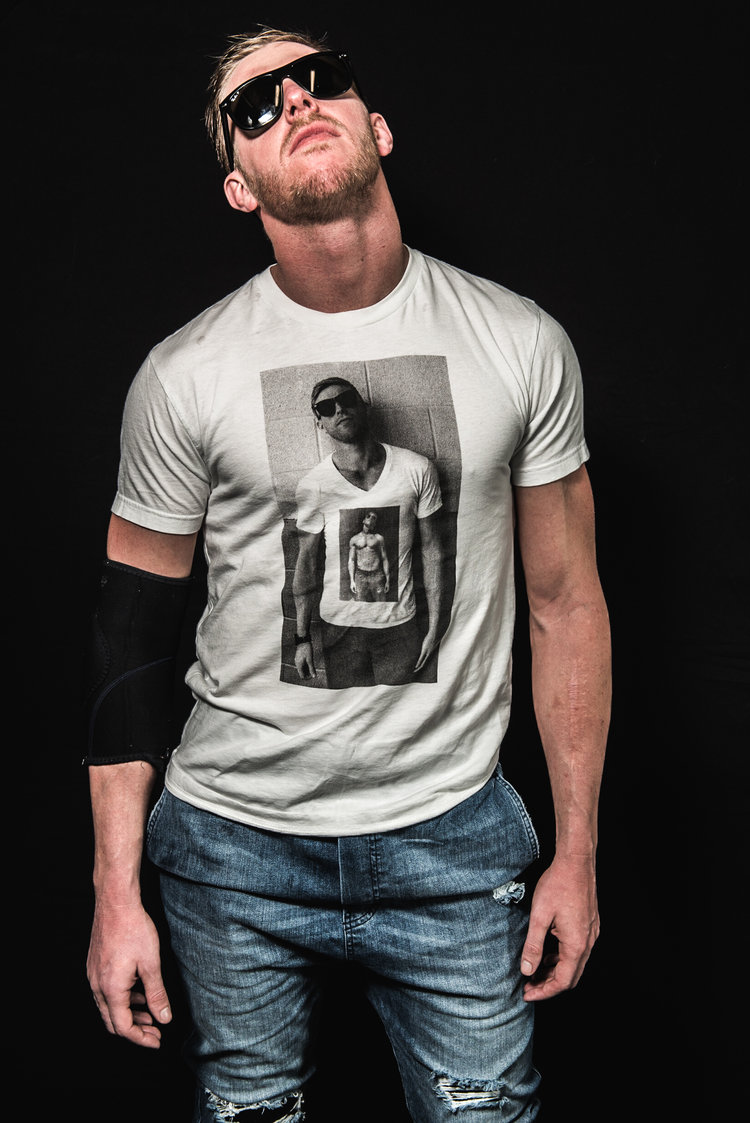 The Ant & The Orange: The Yin and Yang of Orange Cassidy & Fire Ant

When Orange Cassidy began wrestling in 2004, he was neither Freshly Squeezed nor a Fire Ant. The New Jersey-native began as JC Ryder in Pennsylvania’s Ground Breaking Wrestling (GBW) as a member of the New Jersey Independent All-Stars stable that also featured Dan Champion (Danny Rage), Game Changer Wrestling (GCW) regular Lucky-13, Vin Gerard (Jawree Turnbuckles), and Chad Flowers (JC Wrestler). He made his CHIKARA debut, still as JC Ryder, in the 2005 Young Lions Cup, while also debuting in Combat Zone Wrestling (CZW). His training was furthered under the guidance of Chris Hero.

In early 2006, he would re-debut in CHIKARA under a red mask as Fire Ant, part of The Colony, a stable that featured multiple ant characters. He made his debut alongside Soldier Ant (now WWE Superstar Drew Gulak) at the CHIKARA Tag World Grand Prix 2006, losing in the first round. He would eventually fade out JC Ryder in CHIKARA, spending the bulk of his time as the masked Fire Ant, portrayed as the high energy, high flying aerial specialist of the group. But as he continued to deliver high octane matches under a mask, outside of it, he was planning another character that was the complete opposite speed.

In the summer of 2007, he debuted a new unmasked character called simply Orange Cassidy, who moved with all the speed of a sloth in heat, with a tenth of the reaction time. He debuted the character in the Midwest and Eastern indies, in Pennyslvania’s GBW, Pro Wrestling Unplugged (PWU), and Valley Championship Wrestling (VCW) and Ohio’s Absolute Intense Wrestling (AIW) and Wrestling Is Respect (PWR). But his appearances as Orange Cassidy paled in comparison to the work rate of Fire Ant.

As Fire Ant, he was wrestling 30-40 dates a year, but as Cassidy, it was often less than 10. As Fire Ant, his career began to take off, winning the 2008 Young Lions Cup. His tag-team tandem with Soldier Ant became a force, winning the 2008 Tag World Grand Prix, followed up by a 188-day run as CHIKARA Campeonatos de Parejas (Tag Team) titles in 2009. Fire Ant would go on to become the first wrestler to win two CHIKARA King of Trios tournaments, winning in 2011 alongside Soldier Ant and Silver Ant (“Hot Sauce” Tracy Williams), then again in 2018 with the new Green Ant and Thief Ant.

In 2012, Orange Cassidy – the character – would finally make his own debut in CHIKARA as a member of the Gentlemen’s Club, a stable lead by Chuck Taylor that also featured Drew Gulak, Jake Manning and The Swamp Monster. But despite his growing popularity in CHIKARA and the Eastern US indies, Fire Ant still did three times the bookings as Orange Cassidy. That is until 2018.

In 2018, Orange Cassidy overtook Fire Ant in appearances for the first time in their 11-years of existence together, and suddenly he was appearing in bigger indies outside of CHIKARA, like Beyond Wrestling (where he’d actually debuted in 2016), GCW, and Fight Club: PRO in the United Kingdom. On December 31, 2018, at Beyond’s Heavy Lies The Crown, he shockingly ended “Hot Sauce” Tracy Williams‘ record 309-day reign as the IWTV Independent Wrestling Champion, just before Williams headed to Ring of Honor. It was his first championship as the Orange Cassidy character.

He would lose the belt to Kris Statlander after 146-days, before regaining it in June of 2019, and becoming the first wrestler to hold the IWTV title twice. His touring throughout multiple promotions on the IndependentWrestling.tv (IWTV) network, such as Black Label Pro, St. Louis Anarchy, Alpha-1 Wrestling, and more saw his indie buzz skyrocket beyond even Fire Ant’s best years in CHIKARA. He also worked with Smash Wrestling in Toronto, EVOLVE Wrestling, Bar Wrestling, and House of Hardcore in the US, and Ireland’s Over the Top (OTT) Wrestling. He also competed in his first-ever Pro Wrestling Guerrilla (PWG) Battle of Los Angeles tournament, one of the most prestigious tournaments in indie wrestling, having only made his PWG debut that May against one of his Besties, Chuck Taylor.

With the success of Orange Cassidy exploding in the US and international indie scene in 2019, Fire Ant saw his role diminish more and more – where he used to wrestle 30-40 times a year, Fire Ant only fought in 11 matches in 2019, while Orange Cassidy was in almost 90. In May, the buzz around Orange Cassidy in the indies was so great that it permeated into the meetings of AEW, and on May 25 appeared for AEW at Double or Nothing in the 21-person Casino Royal Battle Royale, where his showdown with ECW Legend Tommy Dreamer went viral. A star was born.

That August, AEW officially announced the signing of Orange Cassidy, who would accompany Best Friends (Chuck Taylor & Trent?) to the ring at AEW All Out on August 31 from Chicago. His final match under the Fire Ant mask occurred at the 2019 King of Trios, when the 2018 winning trio was knocked out by eventual winners The Crucible featuring Ophidian, Kimber Lee, and Lance Steel, on October 6, 2019. Three weeks later, Cassidy would make his non-Battle Royal AEW in-ring debut on AEW Dynamite, in a 6-man tag match, accompanying Best Friends against QT Marshall and a pre-Dark Order John Silver & Alex Reynolds in victory.

Since then, Orange Cassidy has risen to become one of AEW’s most beloved personalities in a sea of some of pro wrestling biggest personalities, including Chris Jericho, “Broken” Matt Hardy, Kenny Omega, and Cody Rhodes. He is often imitated by fans at ringside, from young to old, as the King of Sloth Style spreads his gospel one hand in his pocket at a time. Back in 2017, as the legend of Orange Cassidy first began to gain steam (and the bulk of the world was unaware he was also the high-flying Fire Ant), he told documentary filmmaker Kenny Johnson that in his other persona he was “trying to be this cool indie wrestler and do all the cool moves and I realized I wanted to be different. I could do a cool moonsault but there was other people doing moonsaults better than me,” he told Johnson. “So what can I offer that’s different and what can I have fun with? And I know, if I’m having fun, then people watching me are having fun too.”

It’s safe to say that hundreds of thousands of people are “having fun” with Orange Cassidy each and every Wednesday night now on AEW Dynamite, with his token sunglasses, hands in the pocket, and limp thumbs out. He’s gone from being a sidekick to start AEW Dynamite to facing Chris Jericho on Night 2 of AEW Fyter Fest. But with the demise of CHIKARA, it means we’ve probably seen the last of Fire Ant in a pro wrestling ring (although hopefully, cameos will still entail). But sometimes, if you wait for it, you’ll see a sudden burst of energy come from Orange Cassidy, and for a brief moment, you can see the Fire Ant in flight. In the end, the superhero has faded away, but it’s the everyman that has captured the hearts of the masses.

Stay tuned to Last Word on Pro Wrestling for more on this and other stories from around the world of wrestling, as they develop. You can always count on LWOPW to be on top of the major news in the wrestling world, as well as to provide you with analysis, previews, videos, interviews, and editorials on the wrestling world. You can catch AEW Dynamite Wednesday nights at 8pm ET on TNT and AEW DARK Tuesday nights at 7pm on their YouTube Channel.