Game Changer Wrestling is set to make its return to The Showboat, located in Atlantic City, New Jersey, for GCW Ashes to Ashes. Longtime fans of the promotion will know full well what to expect heading into this show – simply put, many of the most popular stars on the independent scene under one roof. Whether you’re planning on attending the show live or watching from the comfort of your own home, there’s plenty of action set to take place. Let’s get into the full card, as well as a few highlights, before the event takes place this coming Saturday. 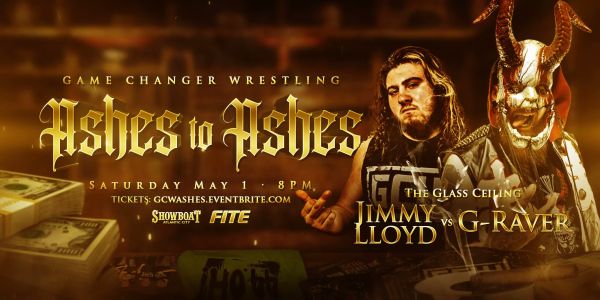 A Saga Continues at GCW Ashes to Ashes

In the latest chapter in a feud dating back to 2019, “Different Boy” Jimmy Lloyd will be taking on fellow deathmatch specialist G-Raver. For those that remember 2 Cups Stuffed, the co-promoted event between Game Changer Wrestling and Black Label Pro during that year, the Doors, Ladders, and Chairs Match was a highlight. As said match reached its climax, Lloyd and G-Raver fought on top of ladders, ultimately resulting in the latter experiencing blood loss and nerve damage. G-Raver never forgot this, as evidenced by last year’s Nick Gage Invitational event, where he set an unsuspecting Lloyd on fire.

From there, Lloyd and G-Raver took part in multiple singles encounters, from I Quit to No Rope Barbed Wire Matches. Simply put, these rivals stopped at nothing to deliver pain to one another. Along the way, they would exchange victories. Most recently, at GCW’s Planet Death event during The Collective Remix, Lloyd teamed with Gory to defeat G-Raver and Brandon Kirk in a Four Corners of Pain Match. What does this latest encounter at GCW Ashes to Ashes have in store? With a stipulation and tagline such as “The Glass Ceiling,” expect nothing short of carnage. 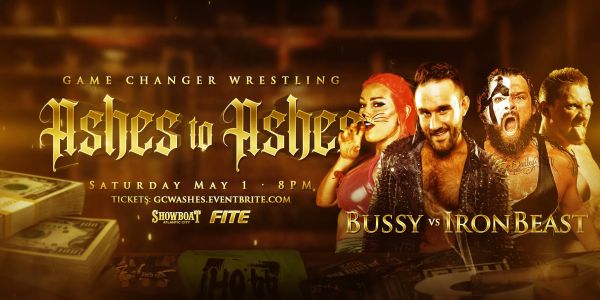 At GCW Ashes to Ashes, the charismatic, unapologetic duo of Allie Kat and EFFY will reunite. These two staples of GCW programming, collectively known as Bussy, have teamed multiple times over the past several months. Facing off against such teams as The 44OH‘s Atticus Cogar and Rickey Shane Page, however, Kat and EFFY have yet to pick up a tag team victory together. GCW Ashes to Ashes could prove to be a turning point for Bussy. With that said, they will have to overcome yet another dominant team in order to come away the winning team.

Ironbeast, the team of KTB and Shane Mercer, has been nothing short of formidable. In fact, of all their tag team matches at GCW events, they have won five of seven; a strong statistic, to say the least. This isn’t to say that they’ve been incapable of branching off as singles stars, as evidenced by Mercer’s recent involvement at Josh Barnett’s Bloodsport 6 or KTB taking on Rich Swann earlier this month at Violence X Suffering‘s Lucid Dreams event, to name a few examples. When it comes to determining a winning team at GCW Ashes to Ashes, one would be hard-pressed to bet against the combined might of Ironbeast. 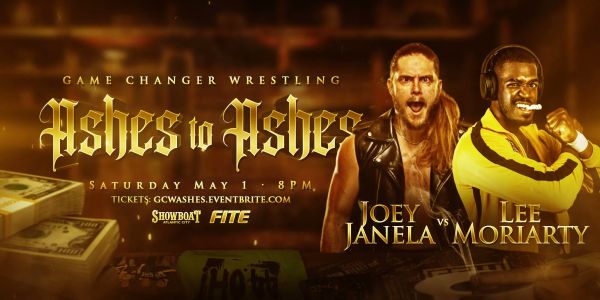 The Bad Boy vs. The Apex of Combat

One of the first matches announced for GCW Ashes to Ashes will pit “The Bad Boy” of All Elite Wrestling against “The Apex of Combat,” a rising star on the independent scene. Joey Janela has been a regular competitor on AEW Dark, taking on fellow AEW talent and independent wrestlers alike. Earlier this year, Janela stepped up to the plate by challenging Darby Allin for the TNT Championship. “The Bad Boy’s” last GCW appearance took place at the rSpring Break event earlier this month, where he defeated Chris Dickinson. Though Janela came away the victor, he was far from happy having his trademark GCW event in the hands of the nefarious 44OH.

Meanwhile, Lee Moriarty has been having an eventful 2021 thus far. “The Apex of Combat,” born in Pittsburgh, Pennsylvania, is the current IWTV Independent Wrestling Champion; he won the title this past March from Warhorse. In addition, Moriarty has been making consistent GCW appearances, such as facing Jordan Oliver in the finals of The Acid Cup 3 and picking up a huge victory over Lio Rush at For the Culture. At Ashes to Ashes, Moriarty will face Janela for the very first time. Between Moriarty’s high-flying, technical approach and Janela’s daredevil, never-say-die style, this will be a bout to tune in for. 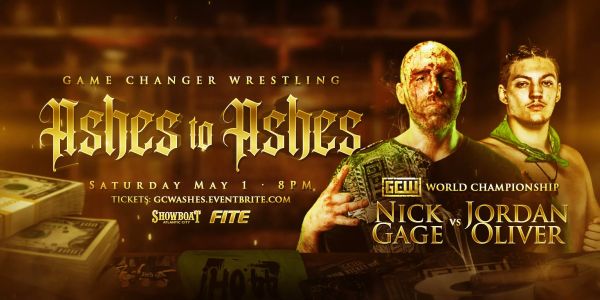 It wouldn’t be a stretch to call Nick Gage the belle of the ball at rSpring Break earlier this year. In the main event, “The King of Ultraviolence” challenged long-time rival, Rickey Shane Page, for the GCW World Championship. This chaotic match ended with Gage putting an end to Page’s 488-day title reign. In the process, Gage won his second GCW World Title, becoming the first man in history to hold it multiple times. With his legion of fans, the Murder Death Kill gang – more commonly known as MDK – Gage is arguably the most popular GCW star. His first-ever title defense will come at Ashes to Ashes and it’s fair to say he’s in for a challenge.

Jordan Oliver has been on a roll in GCW in April. Earlier this month, he took part in The Acid Cup 3, ultimately defeating Lee Moriarty to win it all. Otherwise, he’s been a consistent presence in the promotion, unafraid to back up his braggadocious attitude with his fast-paced, high-flying offense. Furthermore, he will enter Ashes to Ashes with long-term momentum on his side. In March of 2020, Jordan faced Gage in The Acid Cup 2, defeating the ultraviolent star in their quarterfinal match. If history repeats itself, Gage’s second title reign may end before it has a chance to truly begin.

GCW Ashes to Ashes will take place at The Showboat in Atlantic City, New Jersey on May 1, 2021.

Stay tuned to the Last Word on Pro Wrestling for more on this and other stories from around the world of wrestling, as they develop. You can always count on LWOPW to be on top of the major news in the wrestling world, as well as to provide you with analysis, previews, videos, interviews, and editorials on the wrestling world. GCW Ashes to Ashes is set to air on Saturday at 8 PM EST on FITE.