The end of the week is here, which can only mean one thing: Friday Night SmackDown is back (in fact, it can mean many things but this is a SmackDown Preview)! The Road to Money in the Bank is well and truly underway, with Big E already entered into the Men’s Money in the Bank ladder match as the first SmackDown entrant (Drew McIntyre, Riddle, Ricochet and John Morrison have already qualified for Raw). This week, we have confirmation of a SmackDown last man standing match set to determine the second entrant into the big match; which will guarantee a future title opportunity to one lucky participant. Things might also get Rated R, as a certain WWE Hall of Fame inductee returned last week. Let’s get into the preview! 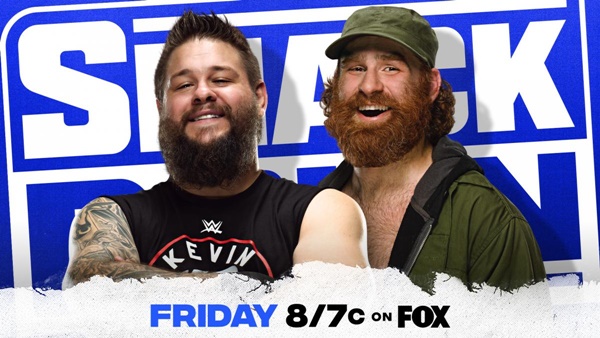 It is a tale as old as time. We will let you, the reader, decide who is beauty and who is beast. Anyway, these two have competed against each other so many times over the course of their WWE careers that it would be impossible to guess exactly how many times they have met (though the answer is 210, including house shows and NXT). However, their track record of hitting home runs with their matches is pretty impressive, so much so that these matches don’t quite feel stale. After all, audiences used to cheer “fight forever” during their matches, so you know they are good. This time, Sami Zayn and Kevin Owens meet to determine the second participant in the Money in the Bank ladder match. A Last Man Standing match, with Owens apparently set to be taking time off, it is highly possible Zayn wins the match with some kind of outside interference. It can’t be said with complete certainty, however. Expect another solid bout in this never ending story.

Night night kid. Try not to drool on the chair. See ya at #MITB pic.twitter.com/WsedqZ1DWD

On last week’s SmackDown, Edge made his return to the blue brand – months after his defeat (alongside Daniel Bryan) to Roman Reigns at WrestleMania. A match has now been penciled in for Money in the Bank, with the two Masters of the Spear to meet one-versus-one for the first time ever. It will be an intriguing contest between two veterans who missed each other by just a year, with Edge retiring the night after WrestleMania in 2011 and Roman Reigns debuting at Survivor Series 2012. In Edge’s absence, Roman became the muscle of The shield, then defacto leader; then he became the “Big Dog”, “The Guy” and now, finally, the Tribal Chief. The Ultimate Opportunist has his work cut out for him if he hopes to achieve a result against Reigns. But first, tonight’s show – expect a brutal retaliation from Reigns or more mind-games from the master of the master. Where will The Usos come in? Tune in to find out.

– Seth Rollins wants to be back in the title picture. Could we see him qualify for the Money in the Bank ladder match tonight? It would be a great addition of star power, so hopefully he does. What about Cesaro?

– Bayley and Bianca Belair appears to be continuing, as the former Hugger-turned-Rolemodel pinned the SmackDown Women’s Champion last week. Maybe tonight we will reach a new chapter in their story.

– Shinsuke Nakamura is the One True King, but what’s next? Additionally, the King-turned-pauper, Baron Corbin, appears to be feeling down since losing the crown. What’s next for him? Expect to find out more tonight.