GLEAT is a professional wrestling company founded by LIDET Entertainment, which previously owned a 75-percent stake in Pro Wrestling NOAH before they were sold to CYBERAGENT. LIDET is very knowledgeable about pro wrestling. They have two divisions in their company one being LIDET UWF, which is their take on UWF rules. The other is G-Pro, which is their standard pro wrestling division. They’re holding one of their first of many-to-come big events: GLEAT Ver.1 TOKYO DOME CITY HALL. Both G-Pro and LIDET UWF matches will take place. Let’s take a look at a few matches, but first, here’s the card. 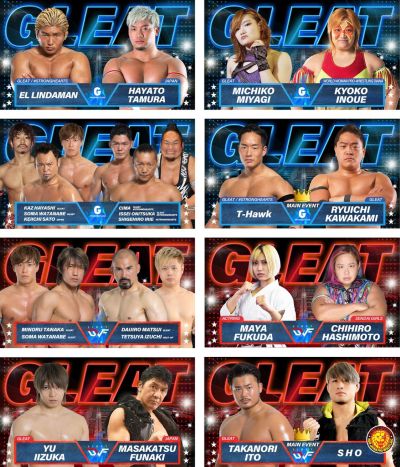 El Lindaman is one of the four STRONGHEARTS members GLEAT managed to sign. He has proven to be well worth the signing, too. He picked up a win at FACE-OFF “ACCESS 2 TDCH” and made it known he had an open contract for Tokyo Dome City Hall. His open challenge, however, didn’t remain open for long. Hayato Tamura made his first appearance in GLEAT to accept the challenge. Tamura is formerly of JUST TAP OUT and is one of the many Taka Michinoku-trained prodigies.

El Lindaman was happy to accept but started to go on and on about Tamura’s successful past as a baseball player. Afterward, he mentioned how he made waves when he started wrestling and, within a year, Tamura became the ZERO-1 World Champion. Lindaman eventually came to the conclusion they should face off in the opener. Tamura is one of the best-unsigned talents. Win or lose, if he signs with GLEAT, the company is going to be a force in the future.

Takanori Ito was one of the first GLEAT signings alongside Soma Watanabe. Ito has been one of the people at the center of the movement, so it makes sense for him to be in one of the main events. However, while he was announced for the LIDET UWF main event, he had an opponent simply listed as X. One night, GLEAT broke the news that New Japan Pro-Wrestling’s SHO would be Ito’s opponent for the Tokyo Dome City Hall show.

It’s rather shocking, as NJPW doesn’t often work with Puro companies, let alone let contracted wrestlers appear in other companies. However, the choice of SHO isn’t a shocker, due to his training in MMA and Jiu-Jitsu. SHO will get to try something different, but not unfamiliar. Meanwhile, Ito will attempt to defend his home promotion and defeat the visitor.

T-Hawk is another member of STRONGHEARTS who signed and has often been described as someone who could benefit any wrestling company. However, while in GLEAT, there haven’t been many who could match his power. Thus, he has been waiting around for someone to step up to him. Ryuichi Kawakami had his Big Japan Pro Wrestling contract picked up by GLEAT in a move that stunned some people. However, he was allowed to finish up some dates before making his way over.

After the G-Pro Wrestling Ver.0 main event that T-Hawk was part of, Kawakami made his presence felt. Kawakami made his way to the ring and put down T-Hawk’s mentor, CIMA. This caused T-Hawk to step up to him. Eventually, a match was made between the two. The tension was raised during their contract signing, where they took their shirts off and had a chop battle won by T-Hawk. Which man will leave GLEAT Ver.1 as the victor and prove their dominance?

Stay tuned to the Last Word on Pro Wrestling for more on this and other stories from around the world of wrestling, as they develop. You can always count on LWOPW to be on top of the major news in the wrestling world, as well as to provide you with analysis, previews, videos, interviews, and editorials on the wrestling world. You can watch GLEAT on their YouTube channel.