The season seven finale of ChocoPro is here and to say that this has been an eventful season would be an understatement. Gatoh Move Pro Wrestling fans witnessed everything from championship matches to the inclusion of Actwres girl’Z stars to Pencil Army betrayal. Gatoh Move seems intent on ending this season with a bang, hosting three matches within the confines of Ichigaya Chocolate Square. Without any further delay, let’s run down the action for ChocoPro #126. 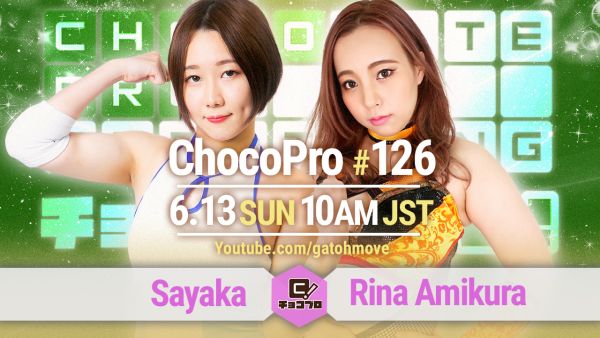 Opening ChocoPro #126 will be a singles contest between a “Beautiful Cosplayer” and a “Harmonious Powerhouse,” pitting Gatoh Move’s Sayaka against AWG’s Rina Amikura. This wouldn’t be Sayaka’s first match against an AWG star; think back to episode #114, which saw her take on Ayumi Hayashi in a losing effort. Since then, however, Sayaka has had better luck in ChocoPro, even picking up a tag team victory over Pencil Army on episode #118. However, on the seven season finale, the fighter in white takes on a formidable challenge.

Rina Amikura is equal parts hard-hitting and melodious. She is a powerhouse wrestler, her signature Wah Press being just as punishing as it is theatric. However, she is also an aspiring singer; she has been known to break out into songs in certain matches. For proof of this, look no further than her one other ChocoPro match against Mei Suruga on episode #112. Given that Amikura fell to “The Apple Girl,” she will be looking to rebound with a win over Sayaka. 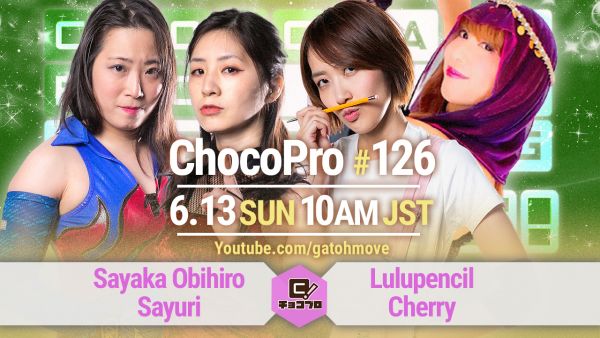 Sayaka Obihiro and Sayuri vs. Lulu Pencil and Cherry

Next is a tag team contest pitting two veteran-and-novice teams against one another. On one side of Ichigaya Chocolate Square will stand Sayaka Obihiro and Sayuri. Obihiro is highly regarded as a pillar of Gatoh Move and she continues to wrestle watches within Ichigaya Chocolate Square to this day. Obihiro will team with Sayuri, the stealthy “Kunoichi” of Gatoh Move. Keep in mind that she is coming off a big tag team win on episode #118, which saw her team with Mei Suruga in a winning effort over AWG’s Ayano Irie and Waka Tsukiyama.

Obihiro and Sayuri will take on the unorthodox pair of Lulu Pencil and Cherry. In a rare instance, Lulu Pencil will not be teaming with one of her fellow Pencil Army members. This may work to her benefit, however, as she’ll be able to truly put her trademark resourceful offense to the test. This isn’t to say that her opponent will be a slouch. Cherry is a joshi wrestling veteran, recently finding herself working in such organizations as AWG, YMZ Pro Wrestling, as well as wrestling at the Hana Kimura Memorial Show Matane. Will the expertise of Cherry and cunning of Lulu Pencil help them net the tag team victory? 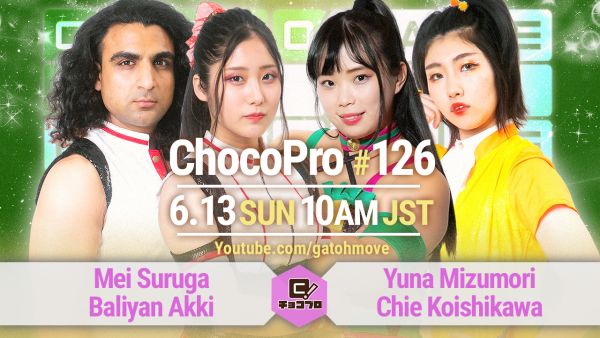 In the main event of the ChocoPro season seven finale, Best Bros will face Yuna Mizumori and Chie Koishikawa in a non-title contest. As the Asia Dream Tag Team Champions, Mei Suruga and Baliyan Akki are among the most important figures in Gatoh Move. On the previous episode, Suruga battled Minoru Fujita for the Super Asia Championship. Though “The Big Apple” herself put forth her most valiant effort to date, it was the deathmatch wrestling veteran in Fujita that retained his gold. Heading into ChocoPro #126, Suruga will have to pivot and get back at the top of her game.

This is especially true given the caliber of opponents Best Bros are up against. Yuna Mizumori’s season seven matches have been sporadic, as she’s been working in other promotions, Michinoku Pro Wrestling especially. Even so, when she steps foot in a Gatoh Move ring, there are arguably few better. On the previous episode, she had her sights set on the Super Asia Championship following Minoru Fujita’s successful title defense. Teaming with “The Pineapple Girl” is Chie Koishikawa, who is no stranger to Yunamon. In 2021 alone, they have teamed with and faced off against each other multiple times. Their last match, as a tag team, took place on episode #99, where they lost to Lulu Pencil and Kaori Yoneyama. Can they rebound with a victory in the main event of the season seven finale? Tune in to find out.

Interview: IMPACT Wrestling’s Rosemary Steps Out of the Shadows
How Should Edge Make His Rated-R Return to WWE?