To say that Rosemary is one of the most unique characters in all of pro wrestling would be an understatement. In nearly six years with IMPACT Wrestling, the lady known as ‘The Demon Assassin’ has taken the fans on some wild adventures.

During that time, she has also become one of the promotion’s most respected veterans. In an exclusive interview with Last Word on Pro Wrestling, Rosemary gave a fascinating look into her persona, her time with IMPACT Wrestling, and her philosophies on life.

As mentioned, Rosemary is one of the company’s longest-tenured wrestlers. And despite her wild and (sometimes wicked) ways, it’s not lost on the veteran performer when it comes to the journey she’s taken thus far. Always speaking about herself with plurality, she and all her personalities addressed her time with IMPACT.

“I believe the only active performer who has been with IMPACT longer than ‘The Demon Assassin’ is Eddie Edwards,” the former Knockouts Division Champion said. “So, the two of us are considered the two OGs right now.”

She then summed up her time in IMPACT with one word:

“Ambitious,” she stated, with a bit of a mischievous giggle.

“It’s an honor, really, to us because we did choose IMPACT at the time for a reason,” she continued, now speaking about herself in a polymorphic way. “It was because the Knockouts Division was the destination – where we wanted to be when we started becoming a wrestler. That’s where we set up our home base of operations for a very big reason. ”

Then suddenly, the dichotomy of the person and the persona began to blur, and the entity known as Rosemary stepped fully out of the shadows to take over the interview. It was an immediate and fascinating transformation.

“We want to be a cornerstone of the division, but also we do value our time. Being able to take a moment to ourselves, and be able to reflect.”

During her run with IMPACT, Rosemary has had a strong and special bond with young members of the audience, who she affectionately refers to as her ‘Hivelings.’  She commented about that connection.

“Children have been known throughout the ages to see clearly. To see purely, and to see honestly. Their eyes and their minds haven’t been tainted by bitterness and experience yet in this world. So, they can things, like the spectral realm, like the spirit world, much more clearly than adults can… who have been taught to deny. And ignore. And make up excuses.”

“(Adults) want to explain everything away, as if there is some sort of logic. Rather than just accepting that there are illogical things in this realm and the next.”

“Humans tend to think of dark things as evil. Whereas, darkness is pure. In our realm, the light is what lies. The light casts a different look upon everything. Where in the darkness? Everything looks unified. Everything looks as it is. It doesn’t have a bright spot here or a dark spot there. It’s all the same.”

“Darkness is pure, and children are pure. Therefore, they are dear to the shadow.” 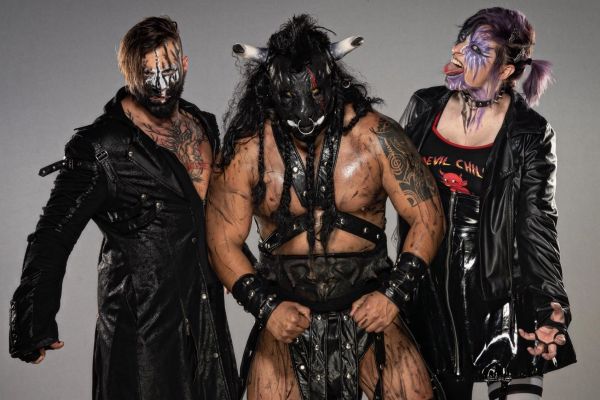 ‘The Demon Assassin’ recently reunited with Crazzy Steve, to reform the popular faction, Decay. She reflected on their past and the lessons she learned while they were teaming with IMPACT Hall of Famer, Abyss.

“Crazzy Steve is much more than a friend; he’s more like a little brother. Family doesn’t always come in blood relations. It’s who you pick up along the way. Crazzy Steve, Rosemary, and Abyss? We were all under the shadow, so we were like family.”

“Abyss is lost from us now, obviously. Crazzy Steve disappeared for quite some time. And we wandered around the IMPACT realm suffering his loss. Because both of us really did learn so much from him. While we saw Abyss as a brother, we also called him a father. He taught us so much. He prepared us. He was the one who trained us for the Monster’s Ball. He taught us how to prepare for such a vicious and chaotic battle.”

“We embraced it… We loved it… And, he paved that way for us.”

In several past vignettes, Rosemary has been seen traveling to the ‘Undead Realm,’ a mythical and macabre place where insanity possesses your television. ‘The Demon Assassin’ says to expect more of that to come.

“If we get our way, Darling, absolutely we will be back to the ‘Undead Realm.’ There is still a certain ‘father’ of ours who is sitting on the throne, which we believe belongs to us. So really, we could take it to war, to take the throne of the Undead Realm, and put it on IMPACT TV.  That’s ratings, in our opinion. War is profitable.”

Her social media presence also reflects the duality of her crepuscular character. Her posts on Twitter (@WeAreRosemary) and Instagram (wearerosemary) only add to the allure of this mysterious and dark figure. She frequently interacts online with thousands of followers.

However, during this conversation, she also extended a message directly to her many fans.

“Stay strong, Hivelings. We’ve heard you throughout this entire pandemic. We know it’s been ever so long since we’ve been able to interact with you in person. But, the time is drawing nigh, and it will be coming to an end. There will come a time very, very soon when the Demon Assassin and the Hive will be reunited once more.”

This weekend, ‘The Demon Assassin’ will square off with Deonna Purrazzo at Impact Wrestling’s premium event, Against All Odds, for the Knockouts Division Championship. There – at that moment – she will look to hold the gold for the first time in several years.

“It’s been some time, hasn’t it? We haven’t had the Knockouts Championship since 2017, and since then, we’ve had different missions. We’ve had different quests. As of late, even before the Valkyrie was arrested, we’ve been focusing more on tag teams, and going after the newly-reformed tag team championships.”

“However, this Knockouts Championship opportunity just sort of landed into our lap. And it’s difficult to pass up such a lucrative opportunity.”

“Deonna Purrazzo. We have faced her before, at Final Resolution, and it didn’t come up in our favor. Albeit, she did have a little bit of help from the outside.  Which we don’t fault her for. It’s all part of it. It’s our fault for not paying attention to what was going on out there.”

“Now? We’re hoping that she steps up because she is a formidable warrior and one of the best we’ve ever encountered in the ring before. We cannot wait for another chance to take her on.”

“But, hopefully, she will acquiesce to leaving those two in the back. The boys? Crazzy Steve and Black Taurus? They have an opportunity of their own. They are busy, so we can leave them in the back. She can leave Kimber Lee and Susan in the back as well.”

“Let’s face each other as warriors. One on one. And, let’s see who comes out as the victor.”