IMPACT Wrestling returns to IMPACT Plus for their next live event Against All Odds. The card will feature multiple title matches, headlined by Kenny Omega who is defending his IMPACT Wrestling World Championship against Moose. A new number one contender for the X-Division will be crowned, and New Japan Pro Wrestling star Satoshi Kojima will be in action. The action will begin at 8 pm EST on IMPACT Plus. Let’s see what the Against All Odds card has in store for us. 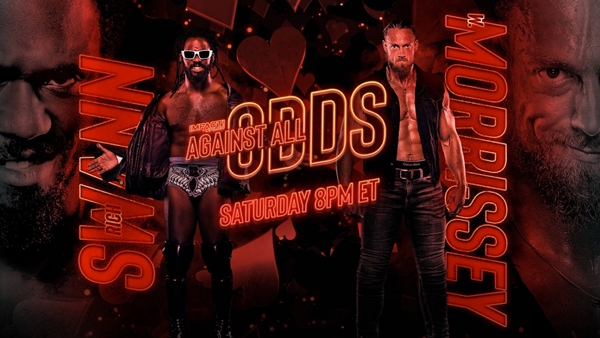 W.Morrissey made his IMPACT debut at Rebellion. He was victorious in an eight-man tag match in which he aligned himself with Violent by Design (VBD). Willie Mack was on the other side of the pin, which set up a match between the two men at Under Siege. Morrissey was victorious in the match and attempted to beat down Mack further after the match. Rich Swann interfered, coming to the aid of his friend Mack. Swann then jumped Morrissey during his sit-down interview on IMPACT on AXS TV setting up a match between the two the following week on IMPACT. Morrissey returned the favor, jumping Swann before the match. The two will finally go one on one at Against All Odds. 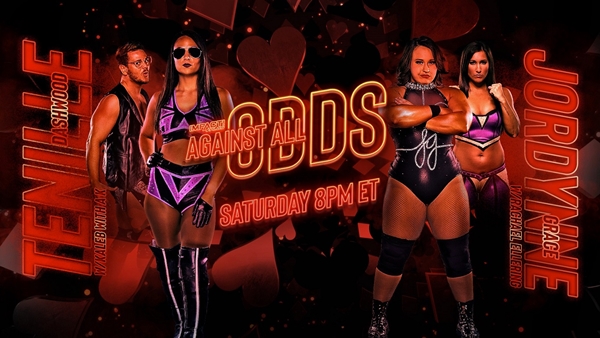 Tenielle Dashwood invited Rachael Ellering to be a co-host on All About Me. Ellering invited her friend and tag team partner Jordynne Grace onto the show with her. Dashwood was not thrilled that Grace crashed the episode and began to disrespect both Grace and Ellering. This irritated Ellering who attempted to lay out a challenge to Dashwood for Against All Odds. Before she could fully lay out the challenge, Grace interrupted and challenged Dashwood to a match. Both stormed off, with Grace headed to the office of Scott D’amore to make the match official.

Against All Odds Street Fight 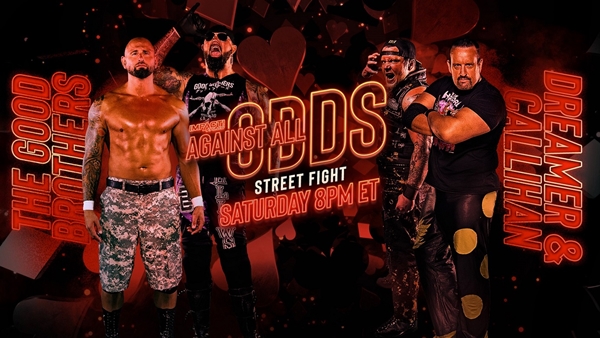 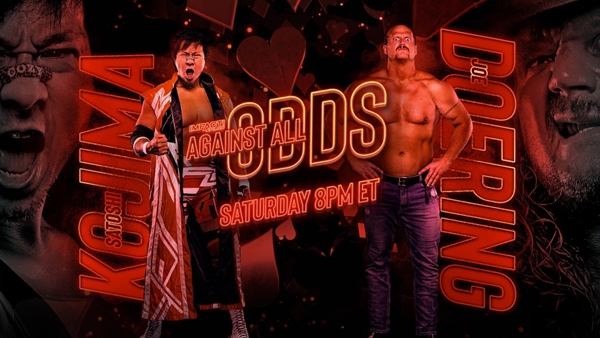 New Japan Pro Wrestling legend Satoshi Kojima will make his IMPACT pay-per-view debut at Against All Odds. He will go toe to toe with Violent by Design member Joe Doering. After VBD successfully captured the IMPACT World Tag Team Championships, VBD leader Eric Young claimed that VBD owned the wrestling world. Kojima then made his way to the ring to confront VBD. He and Doering stood face to face and Kojima laid out the challenge for Doering, which he accepted. Kojima successfully made his IMPACT in-ring debut against VBD member Deaner the following week, despite interference from VBD. Find out if Kojima can win his first IMPACT pay-per-view match at Against All Odds against his old foe Doering.

IMPACT X-Divison Competitors Are Against All Odds 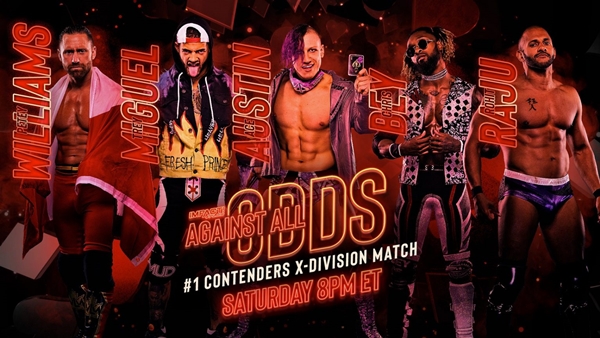 Josh Alexander successfully defended the X-Division Championship in a 60-Minute Iron Man Match against TJP on the June 3 episode of IMPACT. He will find his next competitor in the winner of this five-way number one contender’s match. Petey Williams, Trey Miguel, Ace Austin, Chris Bey, and Rohit Raju will square off for the right to challenge Alexander for the title. The first person to pick up a pinfall or submission will go on to face Alexander for the X-Division Championship. 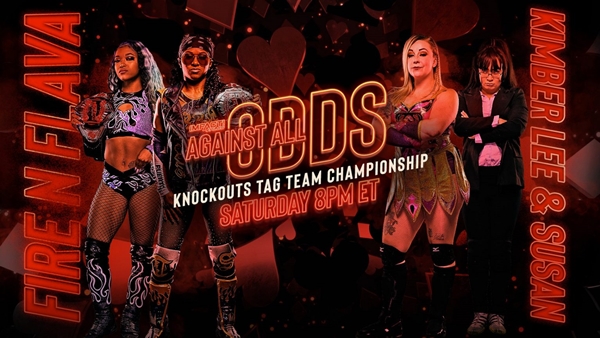 Fire ‘N Flava recaptured the IMPACT Knockouts Tag Titles at Under Siege from Rachael Ellering and Jordynne Grace. The following week on IMPACT they teamed with Deonna Purazzo, Kimber Lee, and Susan in a losing effort to Havok, Jordynne Grace, Rachael Ellering, Rosemary, and Tenille Dashwood. They got back into the win column the following week when they retained their titles against Grace and Ellering. They now have their sights set on previous short-term tag partners Kimber Lee and Susan, who will challenge for the titles. Will they retain, or will Kimber Lee and Susan have their first reign with the titles? 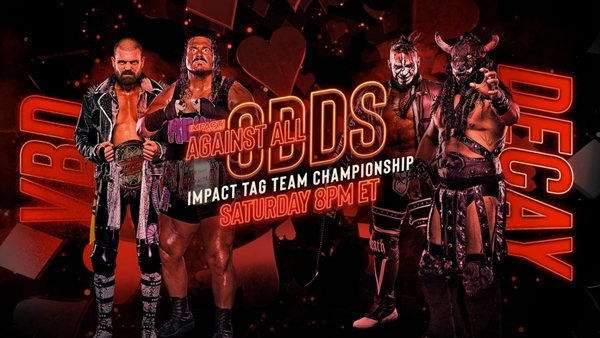 Violent by Design shocked the IMPACT roster when they cashed in their Call Your Shot trophy on former tag champions FinJuice. The team of Rhino and Joe Doering surprised FinJuice after they competed in a grueling match against Ace Austin and Madman Fulton. While fellow VBD member Deaner faced off against Satoshi Kojima on IMPACT on AXS TV, VBD attempted to get involved. They were confronted by Black Taurus and Crazzy Steve of Decay which set up for this title match between the two factions. With Doering taking on Kojima, VBD will utilize the Freebird Rule and have Deaner take the place of Doering in this title match. 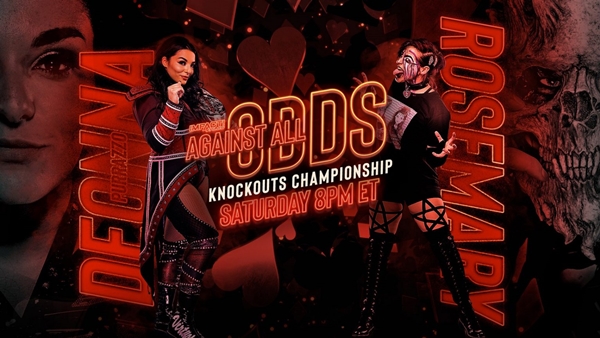 The Knockouts Championship will be defended as current champion Deonna Purrazzo defends the title against Rosemary. Rosemary earned the title shot by pinning Purrazzo in a 10 Knockout tag match on the May 27 edition of IMPACT. That match was made due to the actions of Purrazzo, Kimber Lee, and Susan at Under Siege following the match between Taylor Wilde and Tenille Dashwood. Will Rosemary bring gold to Decay or will the reign of “The Virtuosa” continue?

Moose is Against All The Odds for the IMPACT Title

Moose was victorious in the six-man match at Under Siege to earn this match against Kenny Omega. Omega captured the IMPACT World Championship at Rebellion when he defeated Rich Swann in a winner take all match for the IMPACT and AEW World Titles. This will be his first defense of the IMPACT World Title. Moose is looking to bring the title back to IMPACT Wrestling and has endured the mind games of Don Callis along the way. During the IMPACT and AEW summit on the June 10 episode of IMPACT, it was announced that the match will take place in the home of AEW, Daily’s Place. The winner of the match will face Sami Callihan for the title, at Slammiversary. Will Moose bring the title back to an IMPACT wrestler, or will Omega’s reign continue? Find out when IMPACT Wrestling presents Against All Odds.