For fans of Actwres girl’Z, the 119th episode of ChocoPro may be for you. Gatoh Move Pro Wrestling‘s main roster is set to clash, as well as join forces with, a number of the well-known and up-and-coming names in AWG. Furthermore, this episode will see Gatoh Move’s two main groups team wage war. For those that may be interested in tuning into the official Gatoh Move YouTube channel, here’s the action to expect on ChocoPro #119. 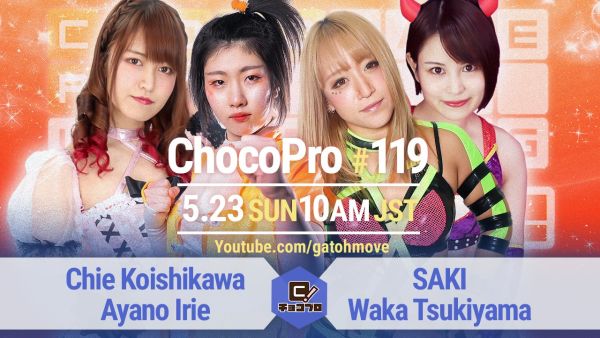 Chie Koishikawa and Ayano Irie vs. SAKI and Waka Tsukiyama

On ChocoPro #118, Ayano Irie made her ChocoPro, as well as Gatoh Move, debut. She teamed with fellow Actwres girl’Z star Waka Tsukiyama in a valiant effort against Gatoh Move stalwarts Sayuri and Mei Suruga. This episode will see Irie, the “snow princess idol,” make her return to Ichigaya Chocolate Square as she teams with the vessel of boundless energy herself, Chie Koishikawa. Though Tsukiyama has proven herself as a strong partner for Irie, the latter may find Koishikawa to be a unique ally in this upcoming match.

Teaming with Tsukiyama, in this match, is the “Ace” of AWG, SAKI. Simply put, SAKI is the main representative of the organization. She is the current reigning AWG Champion, an accolade she won last month from Miyuki Takase. Additionally, SAKI has made her fair share of appearances for Gatoh Move. Her most recent appearance dates back to episode #114, which saw her team with Sayaka Obihiro in a losing effort against the Asia Dream Tag Team Champions, Best Bros. Can SAKI make her return to ChocoPro a win alongside her fellow AWG star? 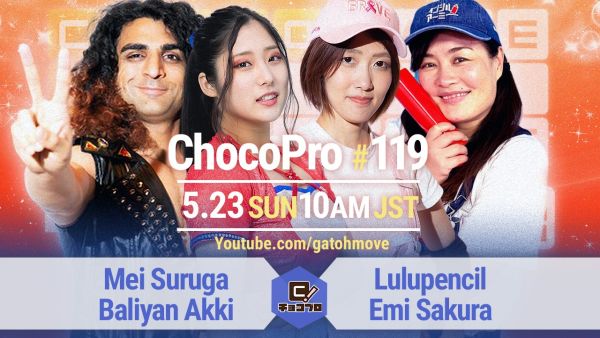 The main event of ChocoPro #119 will see the latest chapter in a long-standing saga. Mei Suruga, one-half of the Asia Dream Tag Team Champions, has not been shy about expressing her disdain for Pencil Army. In fact, it has been this hatred that has entertained fans online, as evidenced by the countless social media posts and videos shared online. All the while, Baliyan Akki, her fellow titleholder as Best Bros, has been doing his best to calm the matter at hand. While Akki will be wrestling this match to win, it’s fair to say that the mischievous “Apple Girl” will aim to deal punishment.

Meanwhile, Pencil Army has been on the back foot from a tag team standpoint. Case and point, on the previous episode of ChocoPro, Lulu Pencil and Emi Sakura fell to the combined efforts of Chie Koishikawa and Sayaka. While Sakura has been nothing short of supportive of her Pencil Army commanding officer, one must wonder how demoralizing constant tag team losses must be. Lulu Pencil’s unyielding spirit has made her a leader to follow, however, which is exactly what “Emi Pencil” will do. When the two main groups in Gatoh Move clash, which will emerge victorious?