The fallout from Rebellion continues as IMPACT Wrestling presents Under Siege on IMPACT Plus. You can catch all of the action on IMPACT Plus on Saturday, May 15th starting at 8 PM EST. Let’s see what Under Siege has in store.

Morrissey Wants to Make an IMPACT at Under Siege

W. Morrissey surprised the wrestling world at Rebellion when he made his IMPACT debut. Aligning himself with Violent by Design and taking the place of injured VBD leader Eric Young, Morrissey joined the eight-man tag match at Rebellion. Morrissey scored the win for VBD by pinning Willie Mack after hitting the East River Crossing. The two will now square off one on one at Under Siege.

“The World’s Most Professional Wrestler,” Brian Myers, was unsuccessful in qualifying for the main event of Under Siege. He lost to his former friend Matt Cardona in a Rebellion rematch. Myers was not happy that he had to face Cardona again to qualify when he beat him less than a week earlier. Pondering his current situation backstage, Rosemary offered him a tarot card reading. Myers was not interested, which lead to an attack from Black Taurus. Myers now has his chance to even the score at Under Siege. 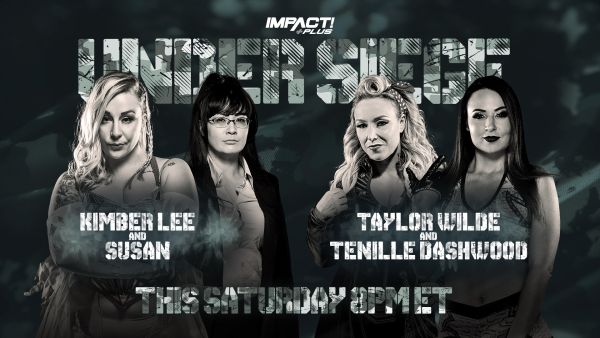 Taylor Wilde made her return to IMPACT at Rebellion. Just after Deonna Purrazzo retained her title against Tenille Dashwood, a beatdown began on Dashwood at the hands of Purrazzo, Kimber Lee, and Susan. When things were looking bleak for Dashwood, Wilde made her return and saved Dashwood. Although Wilde made it clear that she and Dashwood were not a team, this match was still made by Scott D’Amore. Susan insisted the match take place at Under Siege, much to the chagrin of Kimber Lee. 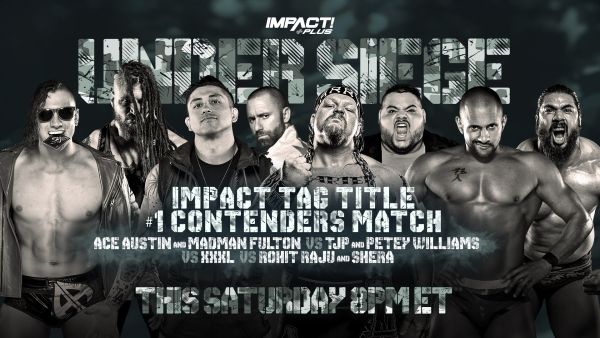 Who Gets the Next Shot at FinJuice?

TJP returned to Swinger’s Palace to pay up for his lost wager. With the topic of number one contenders in mind, a number of tag teams began to call their shots for the IMPACT World Tag Team Championship. As an argument broke out, John E Bravo was sent to Scott D’Amore’s office to make this match official. Ace Austin/Madman Fulton, TJP/Petey Williams, XXXL, and Rohit Raju/Shera will square off at Under Siege, where the winner will get a shot at FinJuice. 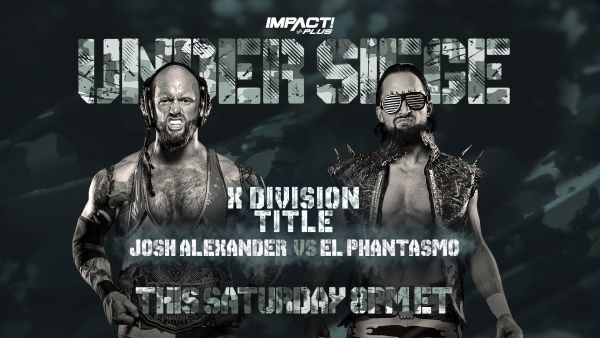 Current IMPACT X-Divison Champion, Josh Alexander, captured the title in a triple threat match at Rebellion. He successfully retained the title against former champion, Ace Austin, the following week on IMPACT. Alexander is looking to retain against El Phantasmo. The New Japan Pro Wrestling star was victorious in a six-person scramble on the latest episode of IMPACT. He has joined fellow NJPW wrestlers FinJuice, who have also started working with IMPACT Wrestling in the past few months. ELP is looking to capture the title and join FinJuice in holding IMPACT gold.

Fire ‘N Flava is looking to recapture the IMPACT Knockouts Tag Team Championship from Jordynne Grace and Rachael Ellering. The two teams have been at ends since after Hardcore Justice, where Jazz was forced to retire. Grace organized a retirement ceremony for Jazz the next week on IMPACT, which was broken up by Fire ‘N Flava. Grace and Jazz did not take kindly to the disrespect and challenged them to an impromptu match in which they were victorious. After the match, Scott D’Amore offered them a shot at the titles which Jazz declined, promising to stay retired. This left Grace in need of a partner and Ellering answered the call. The two were victorious at Rebellion, and are now looking to successfully retain against the former champs. 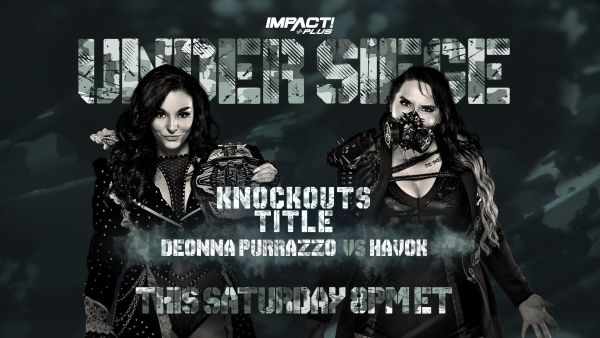 Deonna Purrazzo has her work cut out for her at Under Siege. The current IMPACT Knockouts Champion talked herself into this match after a backstage interview of hers was cut short by Havok and Rosemary. They accused Purrazzo of not defending her championship, which caused Purrazzo to tell them she will find Scott D’Amore to set a match between the two. Just as she was about to escape the building, D’Amore caught up to her and set the match between Havok and Rosemary with the winner receiving a shot at the title. Havok won the match and reversed an attempted beatdown from the champ just after the match.  The two will now go head to head at Under Siege.

The AEW invasion of IMPACT continues as AEW and IMPACT World Champion Kenny Omega teams with The Good Brothers. They will take on the team of Eddie Edwards and IMPACT World Tag Team Champions FinJuice. The Good Brothers and FinJuice have battled for the tag titles ever since FinJuice captured the titles at Sacrifice. They have also met one on one the past two weeks with Doc Gallows picking up a victory over Juice Robinson, and David Finlay winning against Karl Anderson, after interference from Kenny Omega.

Eddie Edwards is also looking for revenge after Omega and The Good Brothers cost him his match against Sami Callihan and his chance to be in the six-man main event match. Edwards has his chance to get even this Saturday night. 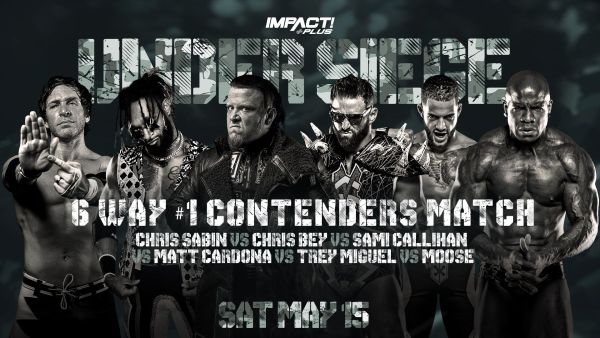 Who Will Face Omega?

IMPACT was in need of a new number one contender after Rebellion. The match between Rich Swann and Kenny Omega did not have an immediate rematch clause, which led to a long line of wrestlers vying for a shot at Omega. Scott D’Amore decided to have six qualifying matches over the next two weeks of IMPACT. The winners of those matches will now compete at Under Siege, where the winner will face Kenny Omega for the IMPACT World Championship.

Chris Bey, Matt Cardona, Sami Callihan, Chris Sabin, Trey Miguel, and Moose were victorious in their respective matches and will now fight one fall to a finish in the main event of the evening. Who will Omega face next? Find out at IMPACT Wrestling Under Siege.