Last time on ChocoPro, the Gatoh Move Pro Wrestling crew and other talents wrestled within the Pro Wrestling HEAT-UP, causing notable property damage in the process. On this upcoming show, Gatoh Move returns to the intimate yet creative venue of Ichigaya Chocolate Square. What does the little promotion that could have in store as it prepares to go live on the official Gatoh Move YouTube channel? Here are the matches that viewers can expect heading into ChocoPro #105. 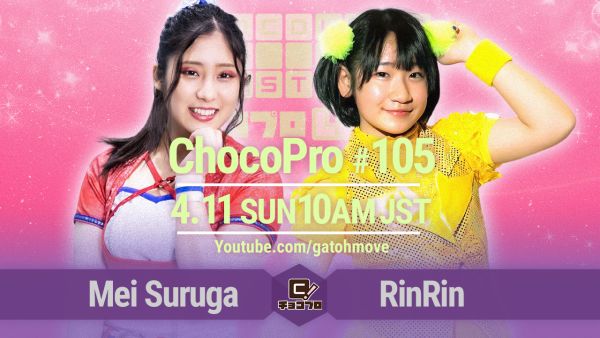 Kicking off ChocoPro #105 will be a clash between third and fourth-generation Gatoh Move stars, as Mei Suruga takes on Rin Rin. As one-half of the Asia Dream Tag Team Champions, Suruga is one of the most formidable wrestlers in Gatoh Move. Her speedy offense and wily tactics alike have made her one of the toughest opponents to thwart in Ichigaya Chocolate Square and beyond. However, “MC” Rin Rin will be looking to regain momentum with a win over Gatoh Move’s “Big Apple.” On the previous episode, Rin Rin and HEAT-UP founder TAMURA fell to Tokiko Kirihara and Antonio Honda, collectively known as Black Comaneci. A victory would be impactful for Rin Rin, especially against one of the purple-and-yellow promotion’s titleholders. 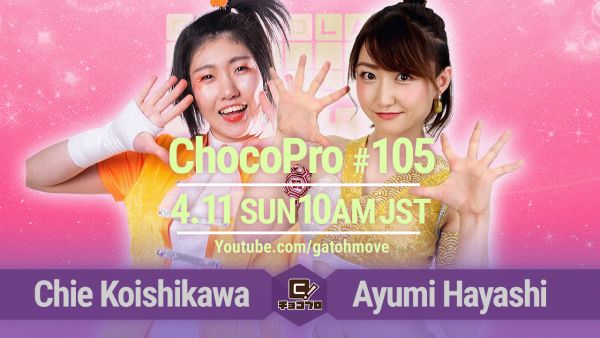 “Wasshoi! Wasshoi!” On this show, Ayumi Hayashi will be making her debut on ChocoPro, as well as for Gatoh Move. Viewers of Actwres girl’Z will undoubtedly be familiar with this charismatic star, as she made her debut for the promotion in late 2018. From there, she made her way to organizations such as Pro Wrestling WAVE, Marvelous, and DDT. With that said, she has yet to step foot in Ichigaya Chocolate Square, and to say that she is up against a unique foe would be an understatement.

Last time, on ChocoPro, Chie Koishikawa teamed with HEAT-UP’s own Tetsuya Izuchi to take on the unlikely team of Baliyan Akki and Minoru Fujita. In a notable moment, the competitors inadvertently broke the wall of the HEAT-UP dojo, leaving a hole in it. Despite a spirited effort, Koishikawa fell to a pinfall from Akki. Now, “Too Much Energy” herself will face a new opponent in the form of Hayashi, who will undoubtedly be looking to plant her flag in Gatoh Move. Hayashi will face Mei Suruga on ChocoPro #106 as well, meaning that she will be competing in Gatoh Move two days in a row. However, to do so, Hayashi will have to thwart a formidable challenge in the form of Koishikawa. 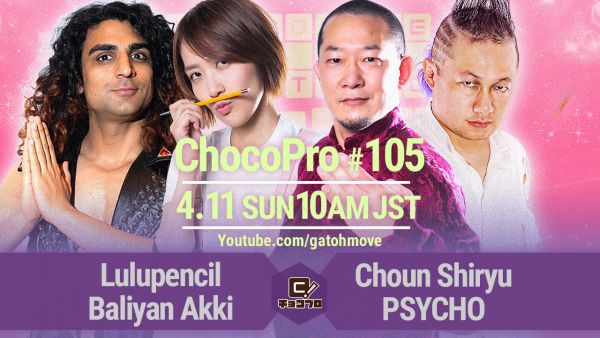 Lulu Pencil and Baliyan Akki vs. Chon Shiryu and PSYCHO

In the main event of ChocoPro #105, two members from separate teams will join forces. Lulu Pencil, the leader of Pencil Army, and Baliyan Akki, one half of the Asia Dream Tag Team Champions, Best Bros, have faced one another on multiple occasions. While these encounters always ended with Akki reigning supreme, the high-flyer from India had to work hard to overcome the earnest, resourceful offense of Lulu Pencil. Though they are members of different teams, they must put their differences to the side if they intend on defeating their opponents on this show.

Returning to Ichigaya Chocolate Square will be Chon Shiryu, the “Dragon” of Gatoh Move. On recent episodes of ChocoPro, he formed a solid team with Sayuri, the “Ninja,” often picking up victories alongside the fourth-generation Gatoh Move star. However, Shiryu will find himself with a new partner on this episode. Enter PSYCHO, who has seen recent success in Ichigaya. Case and point, on Day One of ChocoPro #100, PSYCHO teamed with CHANGO to pick up a victory over Egg Tarts, the team of Chie Koishikawa and Hagane Shinnou. It’s also been said that PSYCHO is a master of disguise, though this is a different story entirely. Keep your eyes peeled for this main event on ChocoPro #105.