One episode remains until the landmark ChocoPro #100 event. It’s safe to say that Emi Sakura and the rest of the Gatoh Move Pro Wrestling crew have plenty of action in store for this two-day extravaganza, celebrating a major milestone. This isn’t to say that longtime fans have no reason to tune in beforehand. ChocoPro #99 is the last stop, and based on the action scheduled, this will be a show worth checking out on the official Gatoh Move YouTube channel. Let’s run down the action set to take place. 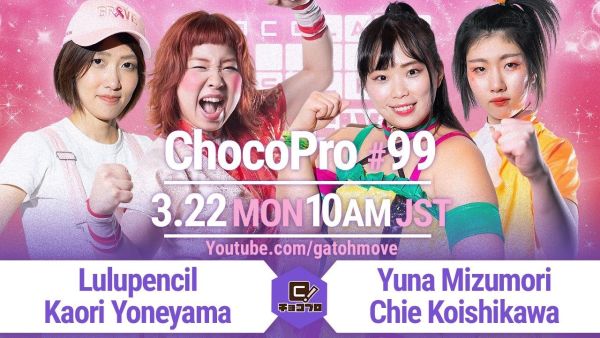 At a recent YMZ Pro Wrestling event, Yuna Mizumori competed against former JWP titleholder Tsubasa Kuragaki. This was a hard-hitting affair that one would expect from these two wrestlers. More important news, however, came in the form of the PURE-J Openweight Title. At PURE-J’s Fight Together 2021 event, Kaori Yoneyama defeated Leon to become the new PURE-J Openweight Champion. Later, she was confronted by Mizumori, who made it clear that she wanted the belt. Thus, at ChocoPro #100, Yoneyama’s first title defense will be against “Tropical Yahho” herself, Yunamon.

On ChocoPro #99, Mizumori will join forces with the energetic Chie Koishikawa to take on the unlikely duo of Yoneyama and Lulu Pencil. More than anything else, this match will be focused on the impending challenge set by Mizumori. A win over Yoneyama would be big for Mizumori, not only heading into ChocoPro #100 but for her career in general. Meanwhile, Lulu Pencil and Koishikawa will be looking to showcase their skills as two fourth-generation Gatoh Move stars. This match should have major implications heading into the two-day ChocoPro #100 supershow. 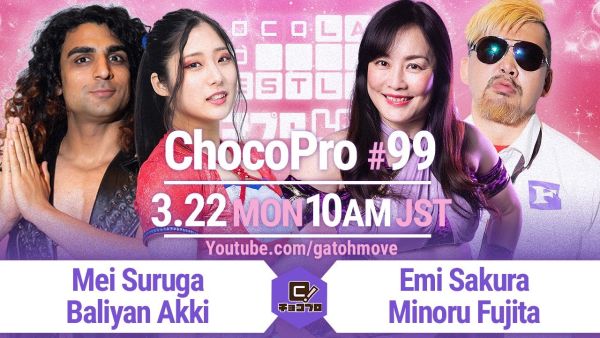 On the previous episode of ChocoPro, Best Bros took on the energetic duo of Chie Koishikawa and Emi Sakura. Though the live feed cut out during the match, viewers were able to see the fallout later in the day. The match ended when Sakura was trapped in a tandem cradle by Mei Suruga and Baliyan Akki, netting the Asia Dream Tag Team Champions the victory. As exhausted as they were, Best Bros emerged victorious once more.

Post-match, Akki reminisced on the legendary obstacles he has faced since the beginning of ChocoPro, dating back to his main event match against Minoru Suzuki on the very first episode. He then drew his attention to Minoru Fujita, the deathmatch specialist of Pencil Army who Akki believed to be in his prime. Akki expressed his goal: to catch Fujita in his prime, taking down a legend in ChocoPro. To this end, Akki challenged Fujita to a one-on-one match on ChocoPro #100.

Mei Suruga chimed in, directing her attention to Emi Sakura. “The Big Apple” herself described Best Bros as the “main characters” of ChocoPro. Meanwhile, she believed Pencil Army to be “movie characters,” lesser stars that morphed into whatever personalities fit their situations. Sakura took offense to this, attacking Suruga. Afterward, Sakura made this upcoming tag team match for ChocoPro #99, which will see the game duo of Best Bros take on Pencil Army, a tandem marching forward with a purpose. Expect this upcoming showdown to be action flick-worthy.