On Sunday, Pro Wrestling NOAH presents NOAH THE INFINITY 2021, live from Korakuen Hall. This major show will be headlined by two big title matches. It will also feature a lower card landscape that could have implications for NOAH’s future heading forward this year.

The NOAH THE INFINITY 2021 Non-Title Bouts: 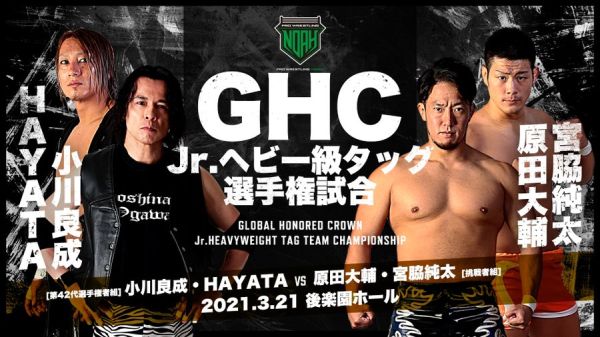 This match is one that was made seemingly to test the growth of young Junta Miyawaki. He hasn’t quite had a string of breakout wins, but he does hold one victory over Yoshinari Ogawa. This came about due to the screwy officiating of Kotaro Suzuki. However, once Daisuke Harada and Atsushi Kotoge seemed as if they were going to challenge Ogawa and HAYATA to a rematch, Junta Miyawaki came out. He begged for Kotoge, who was on the brink of a GHC Junior Heavyweight Championship match, to let him challenge for the belts.

Once STINGER went on the attack, and Junta cleared house, that’s when Harada agreed and said he and Miyawaki will challenge for the belts. Since then, Miyawaki has lost in a singles match to HAYATA, so the odds aren’t on the challengers’ side. However, anything can happen. Will Miyawaki get his first championship or will STINGER continue their reign of dominance? 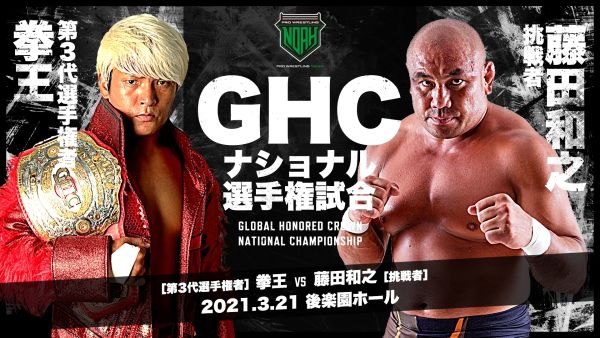 Kenoh has been on a dominant reign as GHC National Champion. He’s also been on a stretch of facing MMA and shoot fighters. Coming off a defense against Kendo Kashin, Kenoh stated that his next defense will be against another Sugiura-gun member. Kenoh nominated Kazuyuki Fujita as his next challenger. As a former MMA fighter with a record of 18-14, Fujita seems like a perfect next challenger for Kenoh. This might be the champion’s greatest challenger to date, as Fujita might be the strongest man Kenoh has encountered in his title run. Will Kenoh reign supreme or will Fujita win GHC gold?