Tokyo Joshi Pro Wrestling will be in Itabashi Green Hall, located in Tokyo, Japan, on March 21st in another sold-out show. Maki Itoh is not featured on this show as she is in self-quarantine after returning from her short excursion to AEW. Here’s what to expect at the TJPW Itabashi Green Hall event. 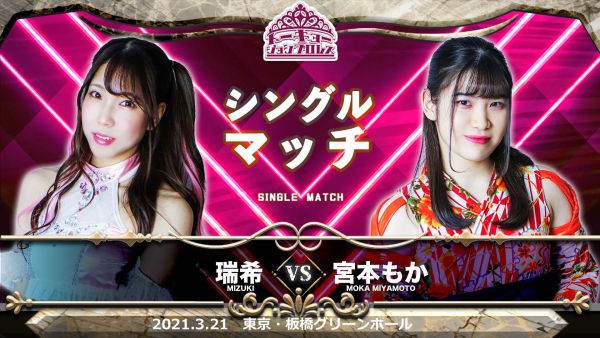 The TJPW Itabashi Green Hall event will start with the only one-on-one match on the show. This is Moka Miyamoto’s first match since she recently graduated college, so maybe this is a graduation gift to her. Apart from the 11-on-11 match at the beginning of March, Mizuki surprisingly hasn’t had a singles match since November 2020 when she faced Yuka Sakazaki. This is sure to be a fun singles match, typical of what to expect from TJPW. 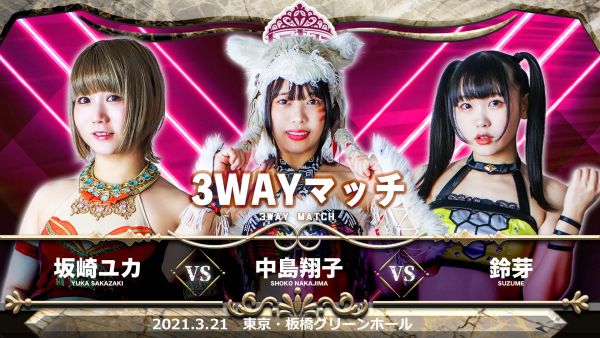 TJPW has been doing numerous three-way matches recently. This one features two veterans in Shoko Nakajima and Yuka Sakazaki, who have been doing some great work early on in 2021, such as Sakazaki’s work in AEW. Besides losing in the Max Heart Tournament finals, Nakajima has been on quite a winning streak alongside Hyper Misao, so it will be refreshing to see her on her own. With Suzume being the rookie in this match, this gives her plenty of learning experience being alongside two of TJPW’s best. However, it looks like Suzume might be the one taking the pin in this. 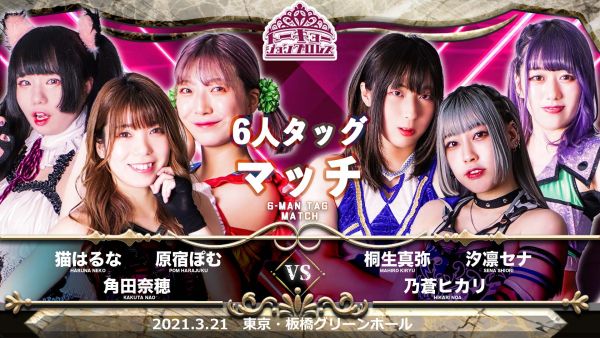 The team of Hikari Noa and Sena Shiori came off an impressive run in the Max Heart Tournament that ended with them losing to NEO Biishiki-gun. Their partner, Mahiro Kiryu, also did well in the tournament with Yuki Kamifuku until they were defeated by Noa and Shiori. On the opposing side of the ring, Pom Harajuku and Haruna Neko will team up once again. Neko recently lost in quite a fun three-way match in a losing effort to Kamiyu. Like Harajuku, however, Neko has steadily improved. Nao Kakuta recently celebrated her 34th birthday. Although she has been on a good streak since joining TJPW in November, she hasn’t truly made a big impact. Nonetheless, her two wins on the PPV 3 show set good momentum. With the path TJPW has been on with Noa and Shiori as a team, we could see their side win. 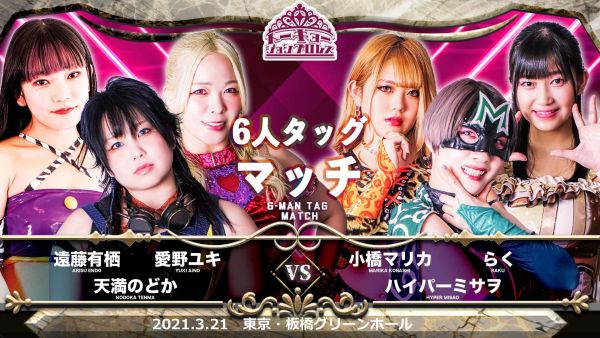 The second six-person tag features the current Princess Tag Team Champions, Nodoka Tenma and Yuki Aino, who were recently challenged by Max Heart Tournament winners Sakisama and Mei Saint-Michel of NEO Biishiki-gun. They are paired with the impressive rookie Arisu Endo. Although she has only won two matches since debuting, Endo has taken to the ring like a duck to water and is really exciting to watch improve. They go against an interesting team in Hyper Misao, Marika Kobashi, and Raku. Misao has also done great work with her partner Nakajima. She seems to excel in tag matches compared to most people in the company. Fans should expect the usual silly antics from Misao. Despite Kobashi getting wins recently, she has stumbled a little with her ring work when working with younger talent. Raku will more than likely have similar antics to Misao, though maybe not as intense. Don’t expect the flashiest match but it has all the potential to be one of the most enjoyable. 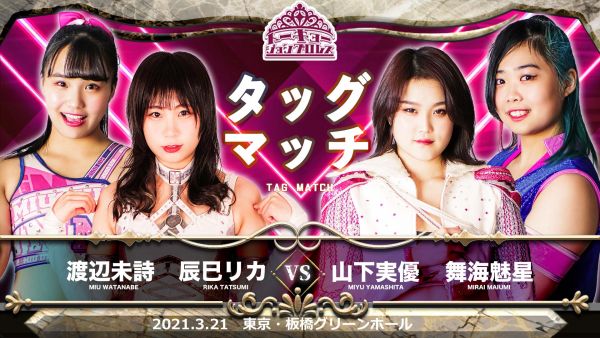 The TJPW Itabashi Green Hall main event features a huge tag team encounter. Rika Tatsumi and Miu Watanabe return as a team after dropping out of the Max Heart Tournament to the finalists, Maki Itoh and Miyu Yamashita. The Princess of Princess Champion, Tatsumi, was pinned by Itoh during the match. This set up Itoh to challenge for the title once she is out of quarantine. It will be important for Tatsumi to stay focused, especially facing a team as strong as Miyu Yamashita and Mirai Maiumi.

Watanabe herself continues to put on great showings whether she is on the winning side or not. With so many strong wrestlers, it may be easy to pass her by, but keep an eye on her. This is the first time in a while that Yamashita will team with someone that isn’t Itoh. As always, Yamashita will show off her impressive kicking ability. This should make a good mix of styles since Maiumi is more of a hard-hitting powerhouse. It’ll be interesting to see how these two work together. This match could go either way in the end. However, with Rika’s title defense coming up, she should pick up the win to build confidence.