Gatoh Move Pro Wrestling is only two episodes away from ChocoPro #100. Needless to say, this will be a major milestone, especially given the fact that it’s too big to confine to a single show. This two-episode event will feature the Gatoh Move regulars and guest stars alike, coming together to put on a show to remember. However, we are still two episodes shy of said milestone, which brings us to ChocoPro #98. Here are the scheduled matches that viewers should anticipate. 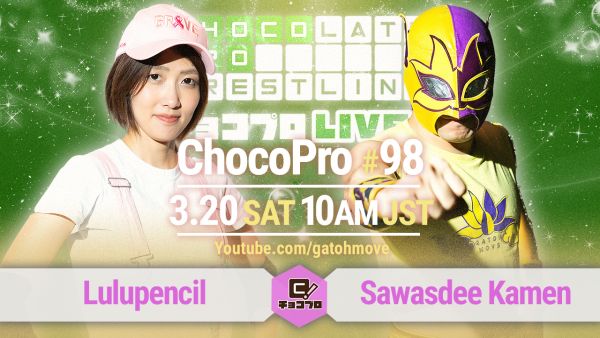 Starting off ChocoPro #98 will be a showdown between two colorful Gatoh Move characters. On one side of Ichigaya Chocolate Square will stand Lulu Pencil, the Pencil Army general herself. She has been quite proactive in recruiting new members, as evidenced by Chris Brookes joining her faction on episode #95. On this show, Lulu Pencil will battle a returning star in the form of Sawasdee Kamen. Donning the purple and yellow of Gatoh Move, he can best be described as a mascot for the promotion, though his skill shouldn’t be overlooked. Will Lulu Pencil pick up her first singles victory on this show or will Kamen win at the expense of the freelance writing fan favorite? 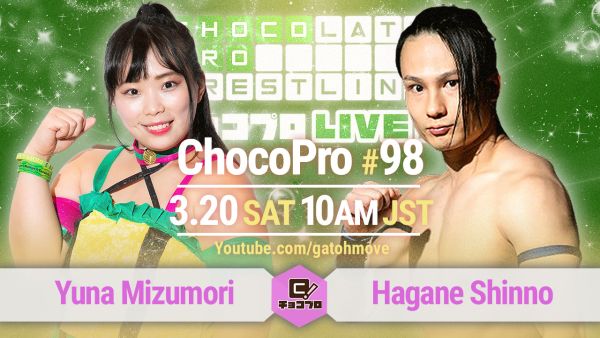 To say that ChocoPro #97 ended in chaotic fashion would be an understatement. Yuna Mizumori was scheduled to face Tokiko Kirihara in the main event of said show. However, due to a back injury sustained during a warm-up, “Otoki-san” was unable to compete. As Emi Sakura made the announcement, she was suddenly attacked by Mizumori, who later declared that she was not going to simply accept opportunities. Rather, she would take it upon herself to create them.

Episode #97 of ChocoPro may be Mizumori’s chance to do so, as she battles Hagane Shinnou. While these two have wrestled one another in the past, their encounters ended with the ice-cold Shinnou picking up the victory over Gatoh Move’s “Pineapple Girl.” However, based on the events of the previous episode, it’s safe to assume that Mizumori will be entering this show with a different mindset. Perhaps this will be enough for her to not only face Shinnou head-on but seize a singles win in the process. 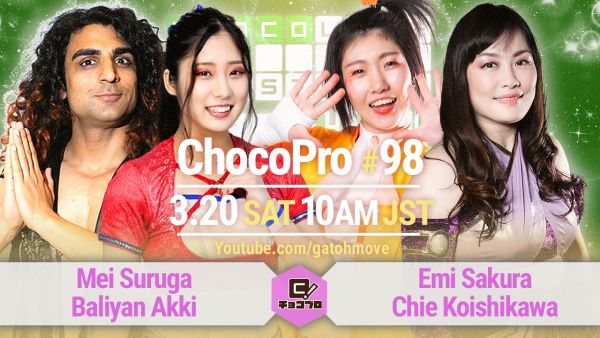 This tag team main event will be a big one. Best Bros, the reigning Asia Dream Tag Team Champions, have a sense of momentum that seemingly can’t be stopped. From RESET to TropiCalamari to Pencil Army, many teams have been unsuccessful at defeating Mei Suruga and Baliyan Akki. When they work together, bringing their combined quickness and wit into Ichigaya Chocolate Square, it’s safe to say there are few teams better. However, with each episode comes opportunity, so it’s important that they stay on top of their game at all times.

Enter the combination of experience and exuberance brought on by Emi Sakura and Chie Koishikawa. Sakura and Koishikawa teamed on the previous episode of ChocoPro, albeit in a losing effort against the “Kunoichi” and “Dragon” known as Sayuri and Chon Shiryu, respectively. However, even in defeat, Sakura and Koishikawa were nothing short of valiant. Coming off a loss, this high-energy tandem will face another great challenge in the form of Best Bros. If previous main events have been indicative, it’s safe to say that ChocoPro #98 is going to conclude with a bang.