This is going to be a look at the Dragon Gate  Roster and factions heading into 2021. The biggest thing to remember when watching Dragon Gate is that there are a lot of betrayals and new factions. So the roster and their allegiances are always evolving. Even on the most recent stretch of shows, there was a betrayal and the completion of a faction. So get ready to open the roster gate everything in this article as far as roster members go is coming straight from Gaora Sports.

These are the current roster members that just so happen to have no faction. They can team with whoever they’d like. Not saying they can’t form a new group or join one. However, right now they do not have one. Ultimo Dragon has aligned with Bokutimo Dragon so on a technicality, he does have an allegiance. It’s worth noting that YAMATO, Keisuke Okuda, and Dragon Kid have teased forming a unit at the most recent shows. The unaffiliated part of the roster starts with: Ultimo Dragon, YAMATO, Dragon Kid, Keisuke Okuda, Shuji Kondo, Strong Machine J, Kagetora, Yosuke♡SantaMaria, Yasushi Kanda, Gamma, Masato Yoshino, Ben-K, Masaaki Mochizuki, Takashi Yoshida, K-Ness, Yuki Yoshioka, Sora Fujikawa, Mondai Ryu(Problem Dragon), Kenichiro Arai, Konomama Ichikawa, Super Siesar, Shachihoko Machine, Shachihoko Boy, Siesar Boy, Strong Machine G, Strong Machine F, Karaoke Machine, Johnson Florida, Keriniman, and Oji Shiba.

Starting off with the faction with the least amount of history, as it was recently formed at the end of 2020. Shun Skywalker returned to Dragon Gate right before Kobe World Pro Wrestling Festival. After an excursion to Mexico, he returned to dethrone Eita of the Open The Dream Gate Championship. Then for a while, he was on his own, before getting Kota Minoura, Jason Lee, and Dragon Dia to defect from Dragon Gate Generation to join him. They went to war with them along the way bringing in rookie sensation La Estrella. They collectively revealed they were called Masquerade, complete with a big elaborate masked entrance. After ending Dragon Gate Generation and with Shun as Dream Gate Champion. Sky is the limit for Masquerade. 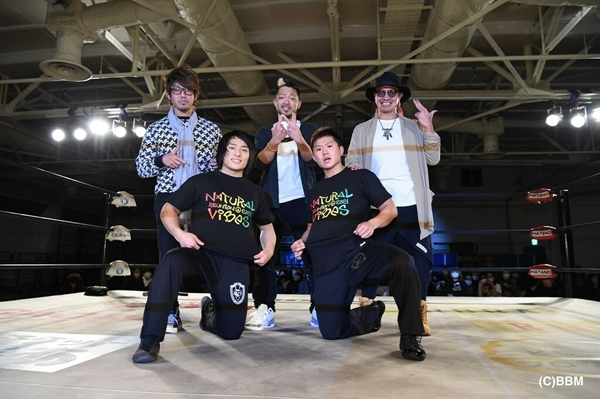 A faction that formed in 2018, when KZY left Tribe Vanguard after failing to capture the Open The Dream Gate Championship. Heel unit Antias tried to sway KZY to join them, but KZY refused and was beaten down. Until he was saved by Susumu Yokosuka and Genki Horiguchi those three became the core three of the unit called Natural Vibes. It was KZY’s first time leading a unit, and they were joined by Punch Tominaga and Brother YASSHI along the way. The unit for the most part was very successful, and only ended when KZY temporarily disbanded the group so they could all take place in the Dragon Gate Generation war. With KZY and Punch being apart of Dragon Gate Generation and the other three being apart of Toryumon due to being trained by Ultimo Dragon in Toryumon. As the war progressed Toryumon was forced to disband after losing to R.E.D. at the Final Gate 2020. This led to Susumu and Genki being without a unit, and KZY was freed up when Dragon Gate Generation disbanded.  Prompting Susumu and Genki to come out and practically beg to bring back Natural Vibes since they weren’t forced to disband. Saying KZY was still a leader, however, the group noted without Punch and Brother they needed more members and made a dance audition for the January 17th show. Along the way, they got into a mini-feud with R.E.D. taking the Open The Triangle Gate Belts in the process. Once auditions happened they selected KZY’s former Tribe Vanguard unit member and rising star U-T. Along with the only class of 2020 member to not join R.E.D. Taketo Kamei. With a new group, and a wave of momentum Natural Vibes could own 2021.

Team Boku is a unit that was created outside of the Dragon Gate Generation War. When Boku R Shimizu was kicked out of R.E.D. Naruki Doi and Ryo Saito picked him up and said they would help him reach his full potential. As the group went on the group wanted to do the same to Punch Tominaga of Dragon Gate Generation. Once Punch was allowed to walk from Dragon Gate Generation, he joined Team Boku. Immediately gaining them a shot at the Open The Triangle Gate Championships. After they lost and went on a bit of a losing streak. Boku R Shimizu adopted the gimmick of Bokutimo Dragon due to being a big Ultimo Dragon fan. He was confronted by the real Dragon who approved of the gimmick as long as he didn’t go back to R.E.D. Then proceeding to state he would team with Bokutimo in 2021. With Ultimo seemingly in the ranks as well, the group has to come together with an injury sidelining Naruki Doi. They are still going to aim for the top no matter what.

R.E.D. is probably the unit most western fans may be familiar with. As PAC debuted at the AEW press conference using their theme song that states their name at the beginning. While he was sporting the Open The Dream Gate Championship. R.E.D. is one of the most longest-tenured groups in Dragon Gate history due to it being two other groups. It was first VerserK, then rebranded to Antias, before rebranding to R.E.D. They changed things around quickly because many thought Antias was one of the worst heel groups in company history. However, R.E.D. has been one of the best. With them at many points holding most of the belts in Dragon Gate. Many members have come and gone but 2020 and the early parts of 2021 have been very good to them. In 2020 after adding BxB Hulk at the end of 2019. They added KAI, rookie phenoms SBKENTo, and Hip Hop Kikuta. Adding to their ranks of Eita, Diamante, Takashi Yoshida, KAZMA Sakamoto, H•Y•O, Kaito Ishida, and their secret weapon Dia Inferno. The group then solidified their dominance, after they disbanded Toryumon in the unit must disband match at the Final Gate 2020. They rolled into 2021 with a lot of momentum, before losing the Open The Triangle belts to Natural Vibes. Takashi Yoshida tried to kick out SBKENTo, however the group instead kicked out Yoshida. Stating they didn’t need any comedy wrestlers in the group. Which Yoshida gone that means the last relic of VerserK and Antias left is Eita. With SBKENTo on the rise, many fans question if we will see a leadership change this year. Is the group fine or are more roadblocks ahead?