The world of Pro Wrestling NOAH is always on the move.  The NOAH News roundup aims to keep you up to date with recent happenings from the world of NOAH.

NOAH Returns To The Budokan 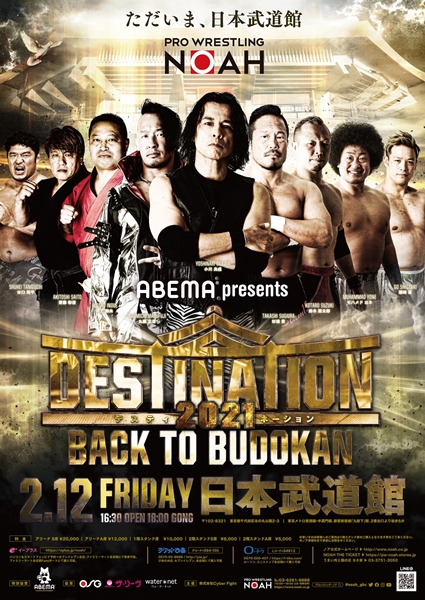 NOAH revealed recently at the beginning of the Final Chronicle 2020, an announcement that was a long time coming. On February 21, 2021, NOAH will hold their first show back in Nippon Budokan since Kenta Kobashi’s retirement in 2013. NOAH has been through a very tough time over the past eleven years. They’ve had many scandals, and after the Suzuki Gun invasion were pretty much on their deathbed. However, after being purchased by CYBERAGENT they really turned it around. Now they get to return home. So big congratulations to Pro Wrestling NOAH on rising from the ashes.

After a grueling 51 minute war with Takashi Sugiura, Go Shiozaki retained his GHC Heavyweight Championship once again. However, his celebration had a slight interruption, as Keiji Mutoh of the M’s Alliance made his way to the ring. Keiji Mutoh then challenged Go Shiozaki to a championship match at Nippon Budokan. Go Shiozaki accepted, and the match is set. Go Shiozaki looks to continue his incredible reign. As where Mutoh looks to become the third man to hold the GHC Heavyweight, IWGP Heavyweight, and AJPW Triple Crown Championships. You must assume it will be the main event, but there’s been no confirmation yet.

At NOAH The Gift 2020 in Nagoya, Takashi Sugiura and Kazushi Sakuraba of the Sugiura Army defend the GHC Heavyweight Tag Team Championships against Kaito Kiyomiya and Yoshiki Inamura. When the match was first announced it seemed as it would be an easy victory for the current champions. Considering Inamura was winless at the time, and Kaito Kiyomiya was reeling after failing to take the National Championship from Kenoh. With both Sugiura and Sakuraba having the chance to enter the match with also the GHC Heavyweight and National Championships, momentum seemed to be on their side. However at the Final Chronicle, Yoshiki Inamura picked up his first big win over a main roster member. He pinned Yuko Miyamoto with the Muso. On top of that, both Sakuraba and Sugiura failed in their championship challenges. With their backs against the wall it could be the perfect time for the new hope tag team of Kiyomiya and Inamura to become champions.

Also at NOAH The Gift 2020, Daisuke Harada will defend the GHC Junior Heavyweight Championship against Tadasuke. These two are no stranger to one another as former members of the beloved NOAH junior unit RATELS. Not only that, but Tadasuke and Daisuke Harada are actually former GHC Junior Heavyweight Tag Team Champions. After the devolving of RATELS this year, the two continued to be allied. However, Tadasuke turned on their fellow ally and former RATEL, YO-HEY. This enraged Daisuke Harada, and Tadasuke almost immediately stayed one step ahead by joining KONGOH. Daisuke Harada continued to have a string of bad luck, before capturing the GHC Junior Heavyweight Tag Team and Singles belts. Tadasuke pinned former champion, Kotaro Suzuki in a tag match. Which made him set his sights on the gold. Once Harada won, Tadasuke pounced at the chance to challenge him. Now they are on a collision course that will come full circle in what is one of the last title matches of the year.

More Chaos In The NOAH Juniors

During the GHC Junior Heavyweight Tag Team Championship match at The Final Chronicle, things got interesting and more chaos let loose. As Kotaro Suzuki looked poised to win the Junior Tag belts, however, his own partner Salvahe De Oriente cost him the match. By turning on him and issuing a trio assault alongside Yoshinari Ogawa and HAYATA. Leading to STINGER retaining. After the match, HAYATA removed the mask of Salvahe revealing him to be Yuya Susumu of FREEDOMS. However, it’s worth noting that he is believed to be a freelancer at this time. He has connections to mainly HAYATA and Seiki Yoshioka of Full Throttle. As Ogawa and HAYATA welcomed Susumu into STINGER, NOSAWA Rongai and his mystery masked man entered the ring. Prior to the event, NOSAWA kept trying to recruit Kotaro Suzuki to be his partner. As Kotaro constantly denied help, NOSAWA set his intentions on joining forces with Yoshinari Ogawa and STINGER. NOSAWA and his masked ally shook hands with STINGER signaling an alliance. As they posed however, NOSAWA and the masked man attacked the three members of STINGER. Before NOSAWA helped Kotaro Suzuki up and showed that he was loyal and wanted to team with him. Kotaro reluctantly accepted to help seemingly making him an unofficial member of the Sugiura Army. The issues between the six involved is far from over.  Yeah, this division is a mess.