GCW Slime Season will also serve as a fundraiser to help the company’s performers during this trying time. Anyone looking to donate can do so at Indiegogo. Though the show will be without fans and spectators, the following card indicates that it will be no less thrilling. 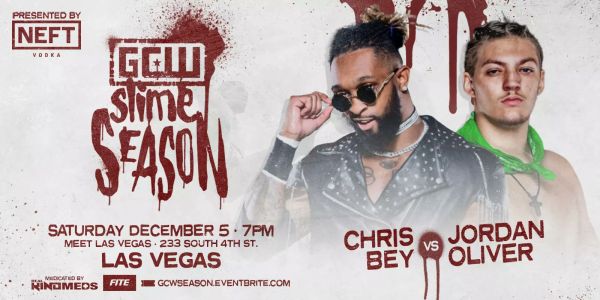 When it comes to IMPACT Wrestling representation at GCW Slime Season, time to shift focus to Chris Bey. As a former X-Divison Champion, Bey is one of the most exciting stars on IMPACT programming, putting on incredible performances with the likes of Rohit Raju, TJP, and Willie Mack. Prior to IMPACT, Bey was successful across the independent scene, including Future Stars of Wrestling; it was here he became an FSW Tag Team, No Limits, and Heavyweight Champion. The “Ultimate Finesser” hasn’t been seen in GCW since this past January, when he faced AJ Gray at Just Being Honest. Slime Season will prove to be a sizable challenge for Bey as well.

To say that the New York-born Jordan Oliver is cocky would be an understatement. This hasn’t been unwarranted, however. Keep in mind that he is coming off a victory from So Much Fun, where he bested underground fan favorite Juicy Finau. Furthermore, is a former CZW Wired Champion, having held the title for a staggering 427 days; the only other competitor that can boast this claim is current WWE Superstar Drew Gulak. Though Oliver is known for being a high-flyer, he isn’t opposed to utilizing underhanded tactics, either. This approach brings another layer for Bey to overcome in what should be a high-octane contest. 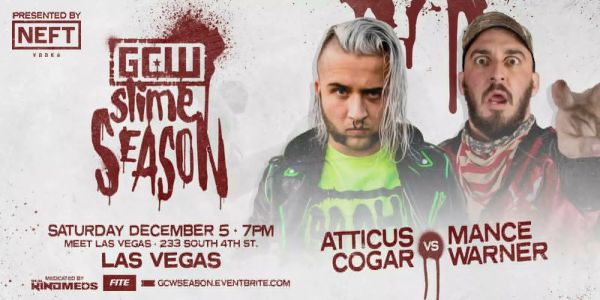 If there’s any one GCW star that wears their battle scars with pride, it would be Atticus Cogar. As one of the members of Rickey Shane Page‘s 44OH, Cogar boasts numbers and a willingness to take things to the extreme. Given that he is the self-proclaimed “Prince of the Deathmatch,” this should come as no surprise. His last GCW appearance took place at So Much Fun, where he bested Cole Radrick. Since then, Cogar has been working largely in ICW No Holds Barred, showcasing how well-earned the aforementioned reputation is. At Slime Season, he may have met his match.

Mance Warner has seen quite a bit of success in GCW last month. Not only did he participate in the Nick Gage Invitational 5, but he won the tournament in question, defeating Lowlife Louie, Alex Colon, and MASADA to do so. He would go on to challenge Page for the GCW World Championship at So Much Fun the night after. Despite his best efforts, a false finish and the champion’s trickery cost “Ol’ Mancer” the title. Despite this, Warner is set to move forward to the proverbial “pay window” at GCW Slime Season. Can Warner defeat Cogar, picking up another GCW victory, or will it be the “Prince” that reigns supreme? 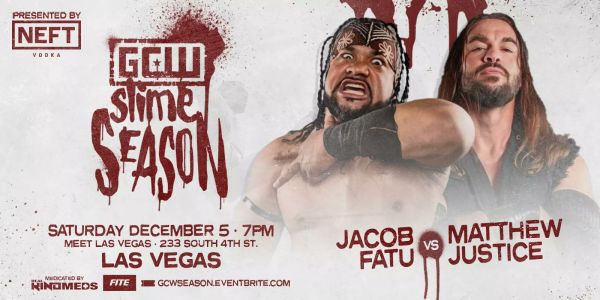 Another world champion set to appear at GCW Slime Season is “The Samoan Werewolf,” Jacob Fatu. As the current World Heavyweight Champion of Major League Wrestling, Fatu is part of the nefarious faction known as CONTRA. The stable in question is a force to be reckoned with. However, Fatu’s success as a singles star can’t be denied. In MLW, Fatu has bested the likes of “Filthy” Tom Lawlor, Davey Boy Smith Jr., and LA Park. Slime Season marks the MLW World Heavyweight Champion’s first GCW appearance since 2018; he was last seen defeating KTB at Joey Janela’s LA Confidential in November of that year.

In his GCW return, Fatu will face off against “The One Man Militia,” Matthew Justice. He has been continuing to build his reputation as a deathmatch wrestler, such as against the legendary Sabu at The Last Resort this past October. Furthermore, Justice has recently come off a 315-day reign as Absolute Intense Wrestling‘s Absolute Champion. In addition to GCW, Justice can be seen in such promotions as Paradigm Pro Wrestling and Black Label Pro. To say that he is in for a challenge at Slime Season would be an understatement. Can Justice pull off the upset win against the reigning MLW World Heavyweight Champion? 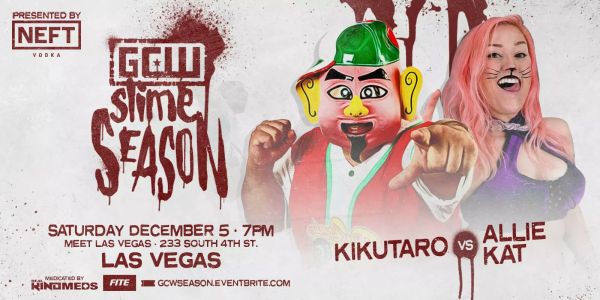 From Las Vegas, Osaka, Japan, Kikutaro can best be described as “unorthodox.” Whenever he steps in the ring, it’s fair to expect a few laughs. Kikutaro is a comedic wrestler with experience on his side; he began his career back in 1994, working for such promotions as Osaka Pro Wrestling and All Japan Pro Wrestling. He also had enjoyed a stint in New Japan Pro Wrestling, competing in the 2003 Best of the Super Junior X tournament. Kikutaro’s last GCW appearance took place in February, at The Art of War, where he teamed with Shigehiro Irie in a losing effort against GENTARO and Tomoya Hirata. At Slime Season, will the clown emerge victorious?

This may be easier said than done, given the caliber of opponent he’s up against. Though lighthearted in her own way, Allie Kat isn’t afraid to take punishment before doling it out severalfold. In 2020 alone, she participated in GCW’s Acid Cup 2 and Tournament of Survival 5; these are considered among the most brutal tournaments in wrestling. Furthermore, in terms of strictly GCW competition, she is coming off a big victory over Elayna Black at The Last Resort. Allie Kat has gone on record saying that she has been awaiting a match with Kikutaro for quite some time. Time will tell if her winning ways continue here. 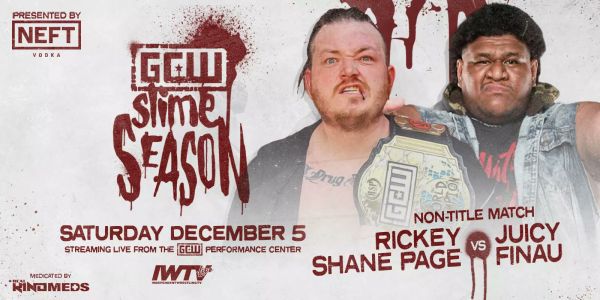 If there is a prime candidate for Most Hated GCW Wrestler of the Year, it would be Rickey Shane Page. Most recently, he was seen dashing the hopes of Mance Warner, who had his eyes set on Page’s GCW Championship. Through nefarious means, the leader of the 44OH was able to keep his title reign intact. With that said, one can’t argue with results. Page has successfully held onto the GCW World Championship all year, having originally won it back in December of 2019. With his title reign recently surpassing one year, Page may be thankful he’s entering this non-title contest.

If Page is among the most hated men in GCW, Juicy Finau is one of the most beloved. He was the feel-good story of The Collective, hustling and working hard in order to make his way in professional wrestling. He has also wrestled a few matches for GCW, showing why the higher-ups saw potential in him to begin with. To say that this upcoming match is important would be an understatement. Finau’s goal isn’t on winning the GCW World Championship, but instead, establishing himself as one of the future stars the promotion can build around. 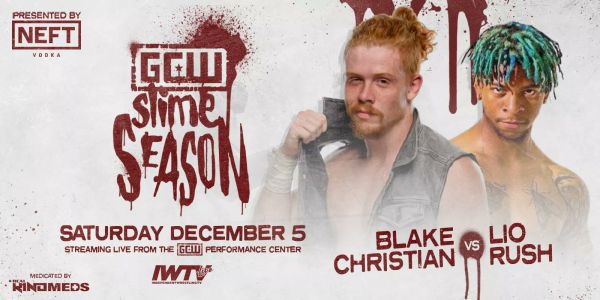 At GCW Slime Season, Blake Christian and Lio Rush will meet in an anticipated rematch. Originally, Christian was set to face IMPACT Wrestling World Champion Rich Swann on this show. However, due to various circumstances, Swann was pulled from the event. Not a promotion to leave its fans hanging, GCW set a new opponent for “Air Blake” at Slime Season. To say that this will be a big one will be an understatement, as Christian is now scheduled to face “The Man of the Hour” within the GCW Performance Center.

The last time Christian and Rush faced off was at GCW So Much Fun last month. In what many fans considered the match of the night, as well as a Match of the Year candidate, Christian defeated Rush. Therefore, it goes without saying that the high-flying “MOTH” is looking to right the aforementioned wrong. Rush has been on an incredible run across the independent scene, not just in GCW but United Wrestling Network and other organizations. This rematch will be one to look forward to. 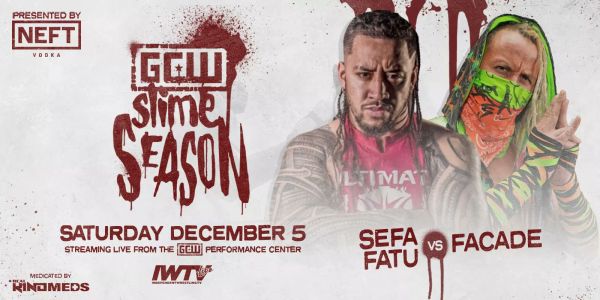 “The Problem” Sefa Fatu is a member of the famed Anoa’i family. He is one of the sons of WWE Hall of Famer Rikishi, brother of Jimmy and Jey Uso, and cousin of Roman Reigns and fellow Slime Season competitor Jacob Fatu. However, Sefa Fatu is set to carve his own path in wrestling. The young Fatu began his training in the late 2010s under his father. Since then, he has appeared for multiple independent promotions, including the Arizona Wrestling Federation, where he held the AWF Heavyweight Championship for 418 days. Slime Season marks the young Fatu’s GCW debut, where he will face off against an indie vet of sorts.

Facade is no stranger to GCW. His last appearance for the promotion took place at Homecoming Weekend this past July, where he competed in an eight-man tag team contest. Outside of GCW, “The Neon Ninja” appeared for organizations including Vicious Outcast Wrestling and International Wrestling Cartel, just to name a few. Since 2007, Facade held gold across such organizations, building his name in the process. As he approaches this match with Fatu, all eyes are on Facade, whose hybrid of technical and high-flying wrestling may serve him well. Can he score a GCW victory at the expense of the up-and-coming Fatu?

Stay tuned to the Last Word on Pro Wrestling for more on this and other stories from around the world of wrestling, as they develop. You can always count on LWOPW to be on top of the major news in the wrestling world, as well as to provide you with analysis, previews, videos, interviews, and editorials on the wrestling world. GCW Slime Season airs on Saturday, December 5, at 7:00 PM EST, on the official GCW YouTube channel.