With the emergence of Shingo Takagi in New Japan, Akira Tozawa being in WWE, and Masaaki Mochizuki being a big part of Pro Wrestling NOAH for the past year. People were curious as to where these guys have been, because they are very good. The commentators often mention it, but for those who don’t know. They come from this company based in Kobe, known as Dragon Gate. Dragon Gate’s origins stretch across Japan and Mexico. More specifically to the Ultimo Dragon Gym. Ultimo Dragon Gym would soon end up forming into a promotion known as Toryumon, or as it’s known in its second home Toryumon Mexico. Toryumon Mexico founded on May 11, 1997. Toryumon Japan was founded on January 31, 1999. Toryumon would become one of the hottest independent promotions in wrestling. Toryumon was seen by many as a launch pad or influencer for the many different styles of wrestling seen today.  Toryumon Japan would go on to become the Dragon Gate we know today, over the years the promotion has not only become a popular staple in Japan but has launched the careers of a number of top American stars thanks to its highly athletic style being a step ahead of what we see in America.  This article aims to offer an introductory guide to fans who may be interested in the promotion that molded PAC into the star he is today.

This is the World Championship of the company. There is deep symbolism behind it by opening the dream gate. It essentially is achieving your dream of being at the top. The Championship itself has a door on it where if you open it, then it has the Champions name inside. The challenger is given a key to open that door if they are victorious. However, if they lose then their key is added to the Championship as a symbol of a successful defense.

This is the basic Junior Heavyweight Championship, and it has a weight limit of 83kg. However, with most Dragon Gate wrestlers being smaller there is no real issue with who challenges for it. This belt has been vacated a lot. Usually, there is a tournament to crown a new champion whenever this belt is vacated.

Give it up for your new Open the Twin Gate champions Jason Lee and Kota Minoura! @lee_7122 @kouta_1230_dg #DragonGate #DragonGateNetworkhttps://t.co/rUbQDMLmWf pic.twitter.com/cyJzC8Rpzw

There is nothing super special about this belt, as this is just a traditional tag team belt. Any team can challenge for it, and it’s defended under Dragon Gate tag rules. Where if one person exits their partner can enter just like they do over in Mexico.

This is a very special title in Dragon Gate, as it is a six-man tag belt. Unlike most other six-man belts in wrestling, this is a crucial belt in the company. The three traits it’s synonymous with is skill, physicality, and heart. Only a perfect trio can open the Triangle Gate. This belt is usually on display in grand fashion at their big Kobe World Festival event. Having a three-way trios elimination match for the belts each year (for the most part). Mostly due to the fact that Dragon Gate believes that’s the best way to showcase the old Toryumon style that made them famous.

Shun Skywalker just recently returned from his trip to Mexico. Right in time for the big Kobe World Festival show. As former champion Eita had no set rival. They had him beat KZY in a defense, and R.E.D. beat down the Dragon Gate Generation. Then the lights went out, and Shun returned laying waste to the biggest heel group in the company. Then he made the challenge for Kobe World where he dethroned Eita! As of this writing, he is set to defend the belt against former partner, Ben K at Final Gate. 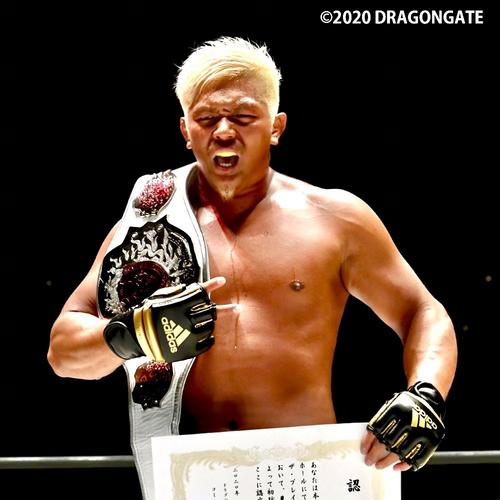 Keisuke Okuda came to Dragon Gate a little over a year ago. He was formerly a member of DDT Pro Wrestling but wanted to grow as a wrestler. So he joined Dragon Gate, and late last year he joined the Dragon Gate Generation due to his lifelong best friend Ben K. Immediately he began a blood feud with then champion, Kaito Ishida of R.E.D. They faced once earlier this year, but Okuda lost. Then Ishida tried to get Okuda to join R.E.D. So Okuda infiltrated R.E.D. only so Ishida would give him another match. Where he won the Championship from Ishida. He then won their rubber match right after at the Kobe World Festival show. As of this writing, he is set to defend the belt against Kagetora at Final Gate.

BxB Hulk and KAI have a long history dating back to an old faction called Tribe Vanguard. KAI actually broke BxB Hulk’s neck and put him out of action once upon a time. KAI, who is a freelancer, filled in for him in Tribe Vanguard while he was out, teaming with YAMATO. Then BxB returned and turned on YAMATO late last year. Joining R.E.D. at the start of the generational war. KAI aligned with YAMATO in Dragon Gate Generation. Then at the Dangerous Gate show in the Dangerous Gate match, a stipulation was that if KAI escaped first he would join R.E.D. KAI turned on YAMATO and joined R.E.D. He and Hulk began tormenting YAMATO together. They then set their sights on former twin gate champions Jason Lee and Kota Minoura for Kobe World. However, Jason Lee got a fever and due to DG rules they vacated the belts. YAMATO stepped in as Minoura’s partner but KAI and Hulk managed to capture the belts anyway. At the time of this writing, they recently defeated the team of KZY and YAMATO. They have no Final Gate challengers yet.

Yoshida and KAZMA were the former champions with Diamante. They were set to defend against Boku R Shimizu, Naruki Doi, and Punch Tominaga of Team Boku but Diamante suffered an injury. The belts were vacated and R.E.D. was tasked with finding a third man for their title decision match against Team Boku. SBKENTo was a promising rookie by the name of Kento Kobune. He had been picking up big wins all year, and on that very same show already had a match. He actually won earlier in the night. Then he showed up as R.E.D.’s third man. He got the submission win, and claimed the belts. R.E.D. explained he was the rookie they wanted the most. Since then they have defended the belts successfully twice. At the time of this writing, they have no challengers set for Final Gate.