Game Changer Wrestling is set to hold the second of its two major yearly tournaments. The Nick Gage Invitational 5 is an ultraviolent platform that has been a staple of GCW since 2015. Last year’s show was nothing short of punishing, as wrestlers were grouped into first-round three-way matches. This year’s showcase should prove to be no less hard-hitting, as evidenced by the card and wrestlers involved. For those that may be interested in catching the NGI5, rest easy knowing that there is plenty of action set. Sit back, relax, and watch as these hungry competitors take each other to the limit. 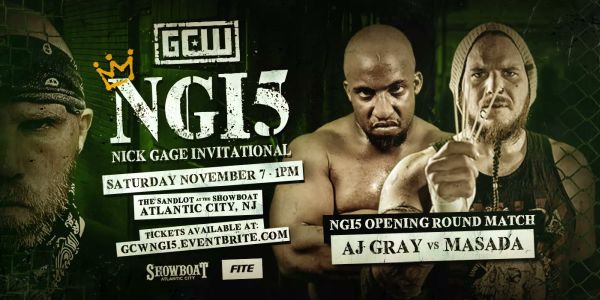 As something of a staple of GCW, AJ Gray being part of the Nick Gage Invitational 5 should come as little surprise. Furthermore, he has been undefeated in singles competition in GCW since August. Since then, he’s bested the likes of Lucky 13, Jimmy Lloyd, and Joey Janela. “Rich Homie Juice” is known for hitting hard and fast, which makes his inclusion in the NGI5 all the more apropos. Gray will enter this tournament with a challenge ahead of him, however.

Enter MASADA, the legendary deathmatch wrestler who has been in the game since the early 2000s. He has plied his hardcore wrestling craft in various organizations. These include Combat Zone Wrestling, where he is a former World Heavyweight Champion. He held the title in question for a staggering 518 days, defeating such names as Chris Dickinson, Rich Swann, and Jerry Lynn. The Nick Gage Invitational 5 marks MASADA’s first match since this past February. Needless to say, “The Ultraviolent Beast” is looking to make his return a success, though he will have to get past Gray first. 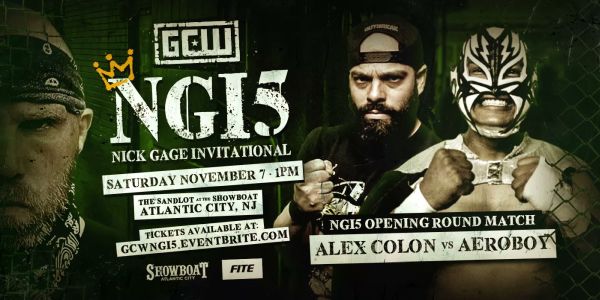 To many GCW fans, Alex Colon may be the most formidable fighter in the Nick Gage Invitational 5. Consider that he is a two-time GCW Tournament of Survival winner; Colon is the only man to win the tournament on multiple occasions. Additionally, his last GCW appearance took place at Joey Janela’s Spring Break 4, where he bested Matt Tremont in a deathmatch, an area where Colon is very much at home. His grit and determination are nothing short of remarkable and it will be these traits that make him a threat in the NGI5.

Colon will face an interesting opponent, however, in the opening round. At first glance, Aeroboy is a traditional luchador, taking to the skies. While Aeroboy isn’t afraid to fly high, the Hidalgo, Mexico native is able to adapt to a hardcore style of wrestling as well. He has wrestled primarily for Lucha Memes and GALLI Lucha Libre in recent months. However, the NGI5 marks his first GCW appearance since January of 2019. Needless to say, Aeroboy is not only set to make a splash in his return but go all the way in the tournament. Expect this match-up to feature lucha libre expertise with a sense of bloodletting. 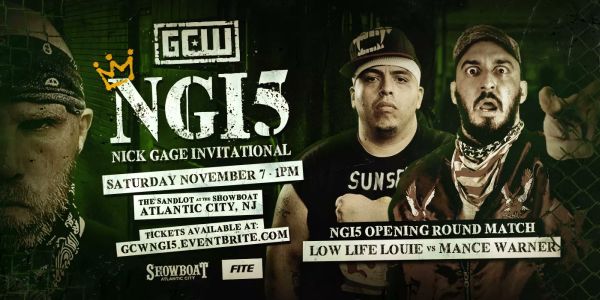 Hailing from New York City, Low Life Louie has built a reputation as a deathmatch specialist since the late 90s. He started to make a name for himself in Jersey All Pro Wrestling, where he became the longest-reigning JAPW Suicidal Champion at 246 days. In regard to GCW, he’s made appearances since 2015, beginning in September of that year in the first-ever Nick Gage Invitational. Louie was last seen in GCW in July of 2015, facing Nick Gage himself for the World Championship. Now, over a year later, Louie makes his return at the fifth NGI5.

Another man who’s no stranger to the NGI is “Ol’ Mancer” himself. Mance Warner competed in last year’s tournament, making it to the finals, where he and Alex Colon were bested by Nick Gage. Needless to say, Warner will enter this year’s tournament with the goal of winning the entire thing. Warner may seem like the type to kick back and enjoy a tall, cold one. However, the former CZW World Heavyweight Champion isn’t afraid to brawl when the opportunity arises. Against a deathmatch veteran such as Louie, however, Warner will have to be at the top of his game. 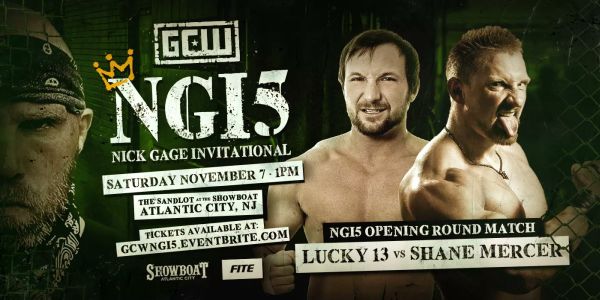 Possessing a hybrid of high-flying offense and hardcore wrestling sensibilities, Lucky 13 may be one of the least predictable competitors in the Nick Gage Invitational 5. The last time he was seen in GCW was back in August; at Jimmy Lloyd’s Jersey Shore, he faced AJ Gray in a solid effort. Since then, Lucky 13 took part in H20 Wrestling‘s Danny Havoc Hardcore Title Tournament, making it to the semifinals. Lucky 13 has performed valiantly in tournaments over the years and now that he’s part of the NGI5, the former H20 Heavyweight Champion is aiming to go all the way.

As one half of Ironbeast, Shane Mercer will take part in singles competition at the NGI5. “The Iron Demon” has been successful in GCW as of late, as evidenced by his recent victory alongside KTB at JJSB4. Mercer’s first GCW tournament was this year’s Tournament of Survival, where he fell to Eric Ryan in a valiant effort. Suffice to say, the NGI5 will be an opportunity at redemption for the current Resistance Pro Wrestling Heavyweight Champion. Will Mercer be able to adapt his power-focused offense to the hardcore environment that the NGI has historically been known for?

Tickets for the event are on sale now via Eventbrite. Attendees are expected to wear masks and face coverings. Furthermore, social distancing guidelines will be enforced throughout the event. For those that are unable to attend in person, the NGI5 will air live on FITE.tv; further details can be found below.

Stay tuned to the Last Word on Pro Wrestling for more on this and other stories from around the world of wrestling, as they develop. You can always count on LWOPW to be on top of the major news in the wrestling world, as well as to provide you with analysis, previews, videos, interviews, and editorials on the wrestling world. The GCW Nick Gage Invitational 5 airs on Saturday at 1:00 PM EST live on FITE.tv.