Tonight on Monday Night RAW, a WWE Superstar made an impact in a big way, figuratively and quite literally. AJ Styles made his entrance for his match against Matt Riddle, but “The Phenomenal One” wasn’t alone. Styles was accompanied by Jordan Omogbehin, his new bodyguard, decked out in a tailored suit. Prior to the match, Styles took to the mic. He verbally ran down everyone from Riddle to Seth Rollins. Styles also referred to himself as “The Prodigal Son” of RAW.

When the match began, Omogbehin refused to leave the ring. As a result, the referee began to count to five; if Omogbehin didn’t exist the ring, Styles would be disqualified. Following physical intimidation on the part of Styles’s new bodyguard, the referee meekly requested Omogbehin leave the ring. Omogbehin obliged, standing at ringside to watch the match. However, he would get involved, such as stopping Riddle from hitting the running apron kick on Styles by simply standing in front of the latter.

There is no officiating when this man's around.#WWERaw @AJStylesOrg pic.twitter.com/rgKuVHgR4K

This may very well be Omogbehin’s most notable break in WWE yet. With that said, long-time fans of RAW will undoubtedly be familiar with this giant of a man. Standing at an imposing 7’3”, the Nigeria-born Jordan Omogbehin joined WWE as part of the October 2018 class. Prior to this, Omogbehin was a college basketball player. Specifically, he played for the University of South Florida and Morgan State University in Baltimore, Maryland. For the latter institution, he played center position for the Morgan State Bears. His college basketball career lasted from 2012 to 2015.

Following his WWE signing, Omogbehin would go on to make several NXT live appearances. He picked up non-televised victories in stipulations including battle royals and handicap matches. Though he hadn’t appeared on WWE programming, by this point, it was clear that the company saw great things in his future. The way that he would make his on-screen debut, however, would be nothing short of unexpected.

This past June, at WWE Backlash, Omogbehin debuted as the “Giant Ninja” of Akira Tozawa‘s ninja gang. It was in his role that he would encounter The Viking Raiders, Street Profits, and even The Big Show. The following August, WWE would not only unveil a new initiative for RAW but a different role for the giant from Nigeria. Enter RAW Underground, a fight club-like branch of WWE’s Monday night programming. 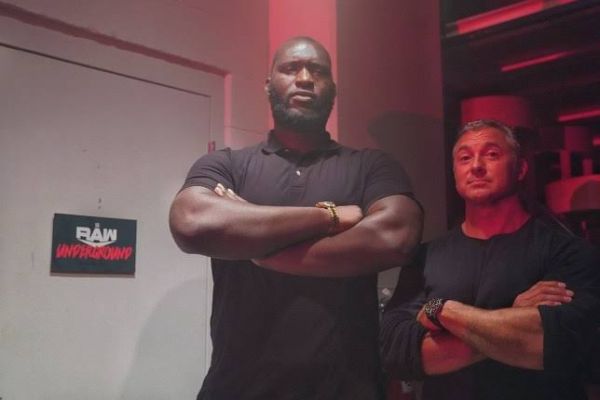 With his new role on Monday Night RAW, Omogbehin may find himself between the ropes before long. Furthermore, his new partnership with Styles poses multiple opportunities, not only as the heavy of the former two-time WWE Champion but as a star in his own right. Omogbehin is already impressive from a physical standpoint. It may not be long until he finds success in his own right.