Following a massive double-header two weeks prior, Game Changer Wrestling returns to Indianapolis with Bring Em Out. For independent wrestling enthusiasts, GCW is the premiere platform to keep an eye on. It wasn’t too long ago that they held Tournament of Survival 5, not to mention Jimmy Lloyd’s Jersey Shore the day after. Bring Em Out marks GCW’s first event in Indianapolis since Keep in Touch at the beginning of last month. How can GCW up the ante following the aforementioned double-header? Here are the confirmed matches for the card. 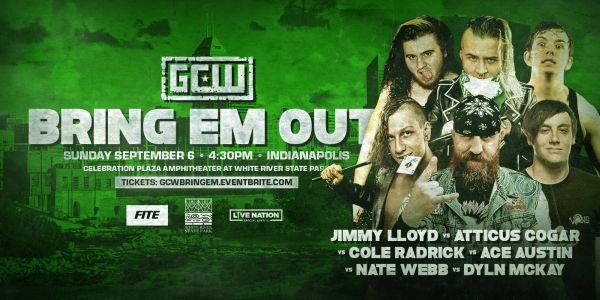 Customary to GCW events is the Scramble Match; this will be no different come Bring Em Out. While this will be a match that Jimmy Lloyd, Atticus Cogar, Cole Radrick, Ace Austin, Nate Webb, and Dyln McKay share, only one competitor can come out on top. Furthermore, the wrestling styles involved are incredibly diverse, from the dare-devil, risk-taking tactics of Lloyd to the technical, aerial offense of Austin. There’s also the wildcard in the form of McKay, who can be considered the hidden treasure of this Scramble Match. This encounter will be a frantic one. 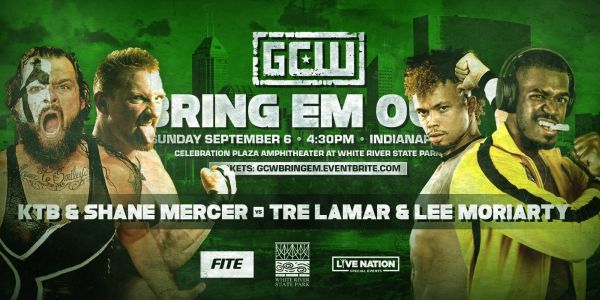 KTB and Shane Mercer vs. Tre Lamar and Lee Moriarty

At Bring Em Out, KTB and Shane Mercer plan on continuing their GCW momentum. At Jimmy Lloyd’s Jersey Shore, they were successful in their match against Injustice members Myron Reed and Jordan Oliver. KTB and Mercer have become a team known for their seamless combination of agility and power, able to bring the fight to their opponents in different ways. This Sunday, they will face the duo of Tre Lamar and Lee Moriarty.

Though only a few years into his professional career, Lamar has made a quick impression, not only in GCW but other promotions including Black Label Pro. His athleticism led him to the BLP Tag Team Championship in 2019. His partner for Bring Em Out will be Moriarty, “The Apex of Combat.” Since he lost to Chris Dickinson at Jimmy Lloyd’s Jersey Shore, Moriarty will have that much larger of a chip on his shoulder. Can the duo of Lamar and Moriarty cut the momentum of KTB and Mercer short? 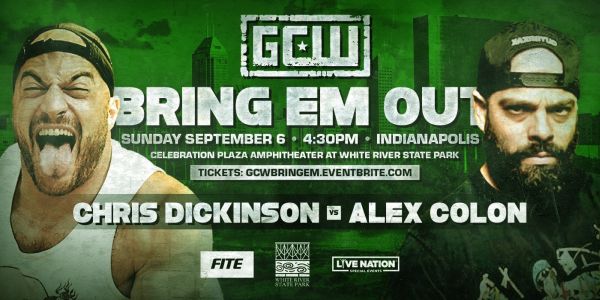 To say that Alex Colon has had an interesting month would be an understatement. Last month, he came out on top of a grueling endurance to win the Tournament of Survival 5, his second ever at that. This made him the only man to win the tournament multiple times. The path to the stop wasn’t easy, as he ultimately defeated GCW World Champion Rickey Shane Page to do so. At GCW Bring Em Out, the deathmatch enthusiast will confront another sizable challenge in the form of Chris Dickinson.

Blending technical wrestling with mixed martial arts, Dickinson is among the most dominant names on the independent scene. Since February, he has been undefeated in GCW events, having won The Acid Cup 2 in March along the way. Simply put, “The Dirty Daddy” has etched a path of dominance. Will this path continue at the expense of the two-time Tournament of Survival victor? This match is going to hurt; the squeamish need not apply. 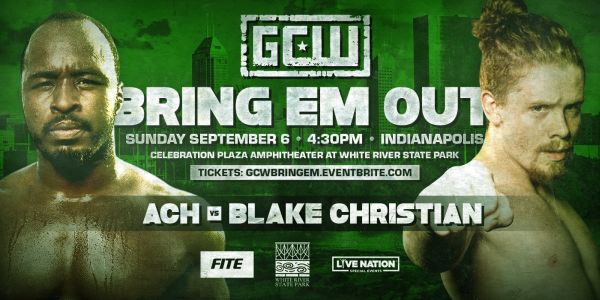 If there’s one thing that will be for certain in this match, it’s that both competitors won’t be shy about taking to the skies. Across the independent scene, ACH and Blake Christian are the two of the highest-flying stars that keep an audience’s attention from opening to closing bell. Those that watch NJPW Strong will be able to testify to this as well. “Super” ACH’s last GCW appearance was at Keep in Touch, where he won the DDT Ironman Heavymetalweight Championship from “The Bad Boy” Joey Janela.

This isn’t to say that Christian doesn’t have his own momentum heading into GCW Bring Em Out. At Jimmy Lloyd’s Jersey Shore, Christian bested Andrew Everett in a fast-paced contest. Christian will have to hustle even harder on this night, though, especially given that ACH will enter this match as the current two-time GWC Champion out of Atlanta Wrestling Entertainment. Blink during this match and you may miss something. 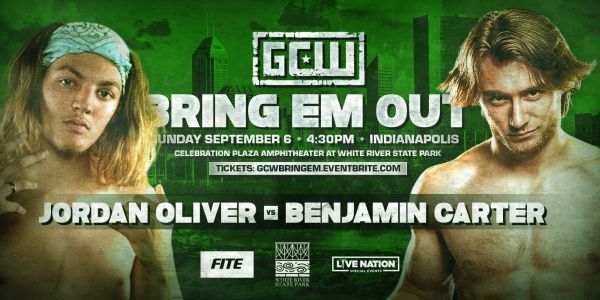 Jordan Oliver is armed with a high-flying style and a cocky attitude. The latter isn’t unwarranted, however, as he has seen success across different promotions. However, he will enter Bring Em Out with something to prove. At Jimmy Lloyd’s Jersey Shore last month, Oliver and fellow Injustice member Myron Reed failed to defeat KTB and Shane Mercer. One can argue that Oliver’s luck in GCW events hasn’t been down; it will be this luck that the former CZW Wired Champion will attempt to reignite here.

This will be easier said than done, though, against the relative newcomer in the form of Benjamin Carter. Though he is still early into his professional wrestling career, the British star has seen success. Case and point, this past February, Carter bested Alex Zayne at Resolute Wrestling‘s Back to the Basics event. On this night, Carter defeated Zayne for the latter’s Resolute Undisputed Championship. Carter made his GCW debut at The Acid Cup 2; since then, he appeared for the promotion on and off. Can the rising talent in Carter secure a victory over Oliver at GCW Bring Em Out? Tune in this Sunday to find out. 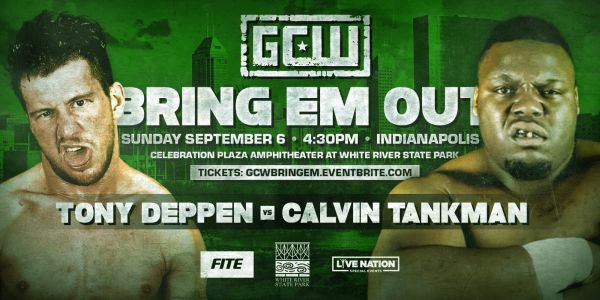 Last month, through no fault of his own, Calvin Tankman became a controversial star in the independent wrestling circuit. At Black Label Pro’s Erick Stevens Presents Professional Wrestling event, Tankman challenged Stevens for the BLP Heavyweight Championship. In a feel-good moment, Tankman overcame Stevens to win the title. This feel-good moment would grow sour, however, as Jake Something quickly swooped and cashed in his opportunity on Tankman. When the night ended with Something as the new BLP Heavyweight Champion, Tankman and the BLP faithful were not happy.

Despite this, Tankman will have to shift his focus to this event, where he faces Tony Deppen, another popular indie star in his own right. His last GCW appearance was at Keep in Touch with a victory over Benjamin Carter. Smart money is on Tankman still fuming over the BLP Heavyweight Championship pried from his grasp. As a result, it’s safe to say that Deppen will have that much greater of a challenge to overcome. 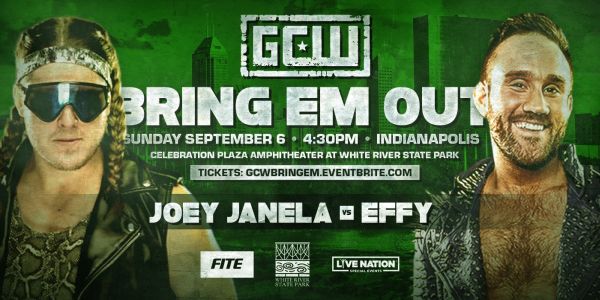 EFFY has a busy number of weeks ahead. In addition to this Bring Em Out showdown with “The Bad Boy,” EFFY will be hosting his own GCW event in October. Enter EFFY’s Big Gay Brunch, which was meant to place during WrestleMania week this year, only to be postponed due to COVID-19. Before EFFY can host the event next month, he will be in action on this show. His opponent will be none other than the risktaking, long-haired AEW star that has had a presence in GCW events over the past few years.

Janela is another individual that has seen tremendous success throughout GCW’s history. Case and point, at Homecoming Weekend this past July, he bested Yoshiko for the DDT Ironman Heavymetalweight Championship. He also picked up victories over the likes of Alex Zayne, Jimmy Lloyd and Lio Rush. EFFY will prove to be a unique challenge for “The Bad Boy,” but if there’s one thing that the latter has proven over the years, it’s that there is no challenge he won’t face head-on. 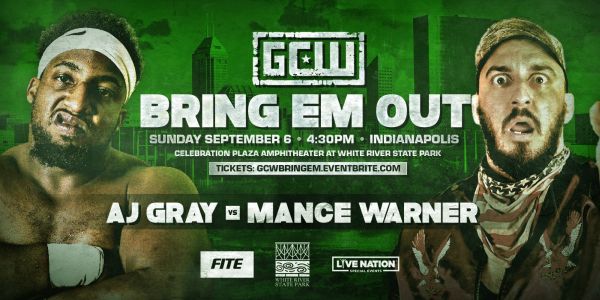 If there’s one thing that AJ Gray proved last month, it’s that he’s not afraid to take things to the extreme. At Jimmy Lloyd’s Jersey Shore, “Rich Homie Juice” himself defeated Lucky 13 in a Death Match. Blending quickness and power, Gray has not only been a GCW staple but a successful independent star in general. Look no further than Glory Pro Wrestling, where he remains the longest-reigning Crown of Glory Champion at nearly 350 days. At Bring Em Out, he may very well meet his match in another indie star that feels right at home in hardcore environments.

Enter Mance Warner, who’s made a name for himself in promotions including CZW and Major League Wrestling. He was especially successful in CZW, winning the promotion’s World Heavyweight Championship back in 2018. Perhaps the only thing “Ol’ Mancer” likes more than a tall cold one is a fight, which he will get when he takes on Gray at Bring Em Out. While this match hasn’t been confirmed as no disqualification, rules will be challenged when they hit the pay window. 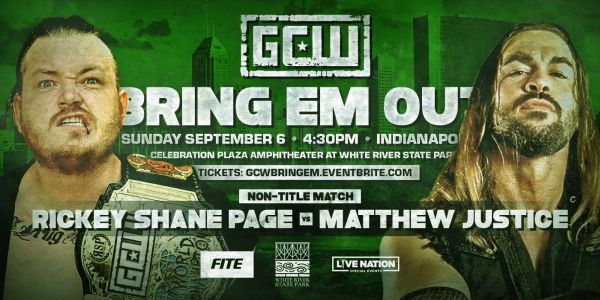 At over 270 days, Rickey Shane Page has proven himself as a dominant GCW World Champion. Victories over the likes of Homicide and Nick Gage are a collective testament to this. RSP participated in the Tournament of Survival 5, making it to the finals. Despite his best efforts in his grueling match, he fell to the eventual winner, Alex Colon. At Bring Em Out, in this non-title match, RSP will go head-to-head with Matthew Justice.

Hard-hitting and apt to take things to the extreme, the “One Man Militia” has more than earned his reputation. His last GCW appearance took place during Homecoming Weekend; it was here he teamed with fellow Second Gear Crew members 1 Called Manders, EFFY, and Mance Warner to defeat Benjamin Carter, Logan Stunt, Facade and Sanchez. Additionally, Justice will enter this match as a double champion from Absolute Intense Wrestling, holding both the Intense and Absolute Titles. No championships will be on the line here, but when two men fight for pride, expect the unexpected.

GCW Bring Em Out will take place at the Celebration Plaza Amphitheater at White River Skate Park in Indianapolis, Indiana. Earlier this month, on the 14th, GCW announced that they sold out the event. For those that are unable to make it, whether locally or abroad, Bring Em Out will air live on FITE.tv. Further details are listed below. For attendees, there are a few key guidelines. First, face masks will be required. Second, the show will run at a reduced venue capacity with a staggered seating chart. Third, hand sanitizer stations will be present at said venue and it’s encouraged that attendees use them. Fourth, and finally, maintain social distance from others.

Stay tuned to the Last Word on Pro Wrestling for more on this and other stories from around the world of wrestling, as they develop. You can always count on LWOPW to be on top of the major news in the wrestling world, as well as to provide you with analysis, previews, videos, interviews, and editorials on the wrestling world. GCW Bring Em Out airs on Sunday night at 4:30 PM EST live on FITE.tv. Looking to talk wrestling, pro football, or any number of sports? Head on over to the LWOS Boards to engage in conversation with fellow fans!