Only one day removed from Tournament of Survival 5, Game Changer Wrestling will keep the ball rolling with Jimmy Lloyd’s Jersey Shore. For longtime GCW faithfuls, the “Different Boy” requires no introduction. Simply put, he’s a deathmatch machine that has no qualms about putting himself in harm’s way. His violent, risk-taking style of wrestling has endeared him to fans and will have newcomers doing double-takes time and time again. Here’s what viewers can expect on the second night of an action-packed wrestling weekend. 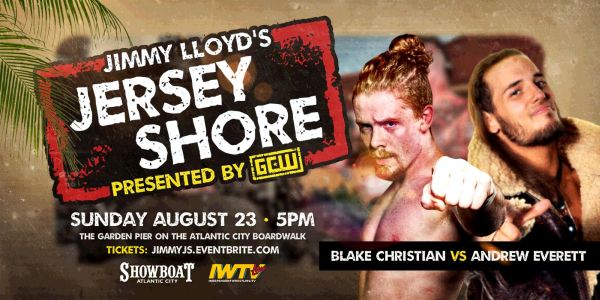 When he isn’t competing on NJPW Strong, Blake Christian is among the most consistent wrestlers in GCW. His last appearance for the promotion took place earlier this month, at Keep in Touch, when he bested Tre Lamar. With this momentum on his side, he will enter Jimmy Lloyd’s Jersey Shore with a boost in confidence. On this show, however, he will challenge Andrew Everett. This high-flying native from North Carolina will enter this match as the current PWI Ultra J Champion; he has held the title four times throughout his career. Expect this to be one of the faster-paced matches of the night and, given the talents of both men involved, a sleeper hit to remember. 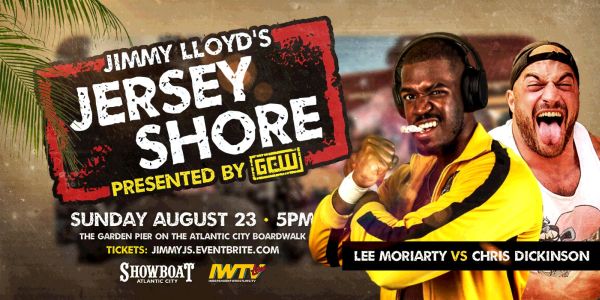 From Pittsburgh, “The Apex of Combat” Lee Moriarty has generated buzz in quick fashion. Though he’s only been in the business for roughly five years, the high-flying Moriarty made a name for himself in Pro Wrestling eXpress, Absolute Intense Wrestling, and elsewhere. At last month’s GCW Homecoming Weekend, he picked up a major victory over Tony Deppen. Jimmy Lloyd’s Jersey Shore will see Moriarty challenge Chris Dickinson, who has become a name in the independent scene as well. With impressive technical acumen, the former two-time EVOLVE Tag Team Champion has seen his share of success in GCW events as well. At Keep in Touch, he bested AJ Gray and had solid matches with the likes of Mance Warner and Alex Zayne in the months prior. This will be another match-up not to miss. 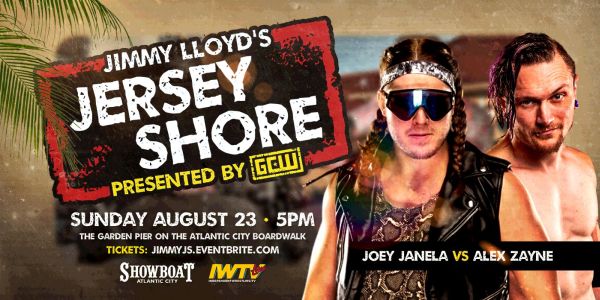 Though he’s currently best known for his status in All Elite Wrestling, “The Bad Boy” Joey Janela would be hard-pressed to hit Jimmy Lloyd’s Jersey Shore. Janela’s charisma and risk-taking style endeared him to the AEW faithful not unlike how it did to indie wrestling fans. He will need more than fan support, however, if he plans to pick up a win on this night. Enter Alex Zayne, whose high-flying arsenal has garnered him popularity as well. Not unlike Blake Christian, Zayne’s reach has expanded due to NJPW Strong. He’s also been a regular performer for GCW events, putting his array of impressive feats on display for all to see. In fact, it can be argued that GCW helped put “The Sauce” on the map. Can Zayne add another GCW moment under his belt by defeating Janela? Tune into Jimmy Lloyd’s Jersey Shore to find out. 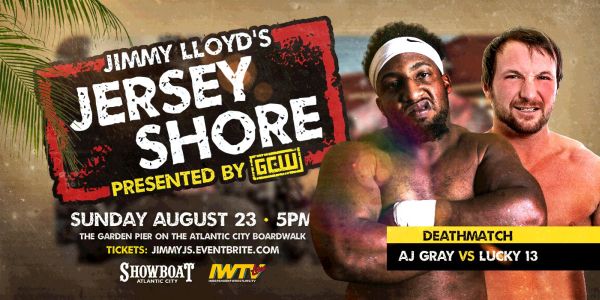 For GCW fans that are looking for their deathmatch fix on this show, look no further. Though AJ Gray started making his name in the Midwest area, it wasn’t long until the independent wrestling world at large became familiar with his work. His combination of power offense and fast-paced maneuvers led him to various accolades, including becoming the current Crown of Glory Champion for Glory Pro Wrestling. Lucky 13 is a New Jersey native synonymous with deathmatch wrestling. He was especially prominent in Combat Zone Wrestling, winning the ultraviolent promotion’s Tag Team Championship on two occasions. He also made numerous GCW appearances throughout the years, so Jimmy Lloyd’s Jersey Shore won’t be unfamiliar territory. On this night, when Gray and Lucky 13 clash, expect weapons to be armed and blood to shed. 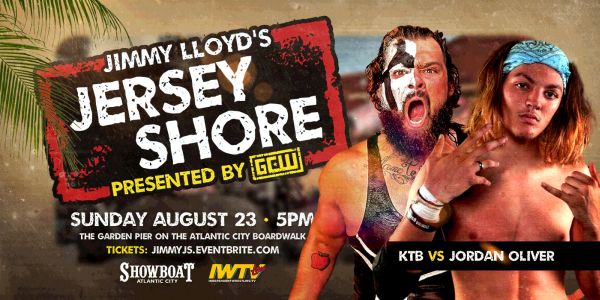 Those that have watched Major League Wrestling over the past year or so will be familiar with Jordan Oliver. The loudmouth member of Injustice furthered his popularity in other locations, including CZW, and of course, GCW. Oliver may be quick to mouth off, but he backs up his words with impressive aerial, lightning-fast feats. He won’t have Injustice to back him up, however, as he goes into Jimmy Lloyd’s Jersey Shore to face KTB. To say that “The Beast” is a stark contrast to Oliver would be an understatement. KTB prioritizes strength and power, as evidenced by his recent victory over Calvin Tankman at Keep in Touch. Such strength and power led him to great success, including the GCW World Championship, which he held for an impressive 350 days. If Jordan can secure a victory over KTB, viewers may never hear the end of it. 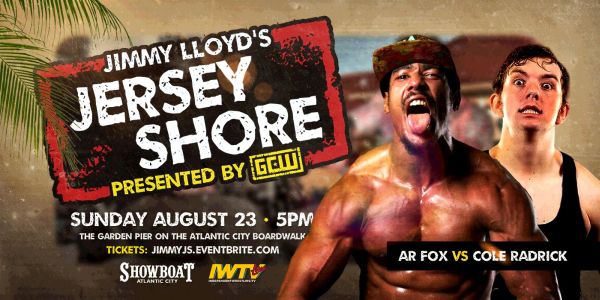 One night removed from their Scramble Match at Tournament of Survival 5, AR Fox and Cole Radrick will meet in one-on-one action. From Connecticut, “The Whole Foxin Show” is among the most popular independent stars in the world today. His high-flying, awe-inspiring offense has led him to success around the world, including multiple EVOLVE and CZW titles. Radrick, at just 22 years of age, has developed popularity in his own right since his start in Indiana. The former Paradigm Pro Wrestling Champion’s last GCW appearance took place at Keep in Touch, where he bested Kylie Rae. Can he continue his success in the promotion with a huge win over Fox? 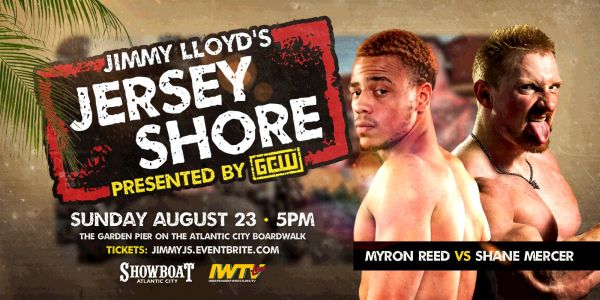 To say that Shane Mercer will have a busy weekend would be an understatement. In addition to his participation in the Tournament of Survival 5 the day before, he will take on Myron Reed the night after. “The Iron Demon” is no slouch, however, and it’s safe to say that no amount of punishment would make him miss Jimmy Lloyd’s Jersey Shore. That said, he will be up against a tall challenge in the form of Myron Reed, making his GCW return during the weekend. The current MLW Middleweight Champion’s last GCW appearance was at Homecoming Weekend on night two’s Scramble Match. Can this Injustice member overcome Mercer, picking up a major singles victory in the process? 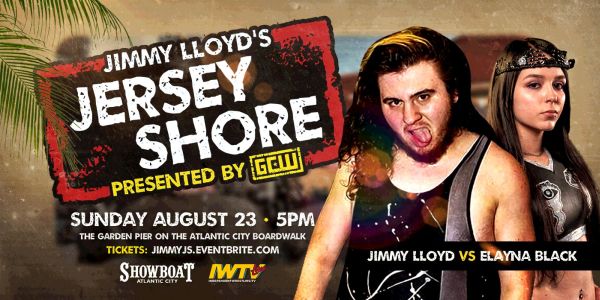 Regardless of how Tournament of Survival 5 unfolds, Jimmy Lloyd won’t miss his own party. Long-time viewers of GCW can attest to his scrappier style of wrestling compared to his contemporaries. The “Different Boy” will attempt to get back into gear as he takes on Elayna Black. Dubbed “The Sorceress of Sin,” this Chicago native has been steadily building a name for herself in the independent scene. Equal parts sinister and hard-hitting, she has shown incredible potential at a young age. As she makes her GCW debut at Jimmy Lloyd’s Jersey Shore, it goes without saying that she will be looking to make an impression. She may possess an evil heart, but she will have to bring more than that if she plans to overcome the risk-taking wrestling style of the very individual this event is named after.

Stay tuned to the Last Word on Pro Wrestling for more on this and other stories from around the world of wrestling, as they develop. You can always count on LWOPW to be on top of the major news in the wrestling world, as well as to provide you with analysis, previews, videos, interviews, and editorials on the wrestling world. GCW Jimmy Lloyd’s Jersey Shore airs on Sunday night at 5 PM EST live on FITE.tv. Looking to talk wrestling, pro football, or any number of sports? Head on over to the LWOS Boards to engage in conversation with fellow fans!