Twenty-five years ago today, a deafening shot was fired in the form of WCW Monday Nitro. From the early 80s to the mid 90s, the professional wrestling world was dominated by the World Wrestling Federation. Though its popularity started to wane during the latter period, due to such circumstances as lacking creative and 1994’s steroid trial, the kingdom of Vince McMahon was nigh impossible to topple. This proved to be an opportunity for World Championship Wrestling to claim the proverbial throne.

During this time, WCW was owned by Ted Turner. Though ownership of a wrestling company was looked down upon by other executives, Turner possessed a soft spot for said form of entertainment. However, it was apparent to Turner that there was room for growth. Thus, he consulted Eric Bischoff, who was the Executive Vice President of WCW at the time. According to Bischoff, the meeting didn’t last much longer than a minute before Turner asked what it would take to beat McMahon. Taken aback, Bischoff requested a spot on prime time; this was television real estate the WWF enjoyed for years. Without hesitation, Turner agreed.

It wasn’t as if the genesis of WCW Monday Nitro was a rash decision on the part of Turner. Keep in mind that, in June of 1994, WCW signed Hulk Hogan. Despite the less than ideal fan reaction Hogan received as a babyface later on, this was a major get for the Turner-owned promotion. The idea of Hogan, who waved the WWF flag for years, shifting gears and moving to a rival company took the professional wrestling world by surprise. WCW would attract many more big names in the years that followed. Prime time television was a necessity.

The date was set for the inaugural episode of WCW Monday Nitro: September 4th, 1995. The venue was one of the most visually striking, as the show took place in the Mall of America in Bloomington, Minnesota. A different environment, to be sure, but it can be argued it helped catch the attention of those who haven’t yet been exposed to WCW. Furthermore, this was a live, one-hour episode. Subsequent episodes would follow this format until the following year, when Nitro expanded to two hours. It wasn’t until 1998 when it became a three-hour program. The first Nitro was serviced by commentary from Bischoff, Steve McMichael, and Bobby “The Brain” Heenan.

As the inaugural WCW Monday Nitro was one hour in length, it only featured three televised matches. The opening bout saw “Flyin’” Brian Pillman take on Jushin Thunder Liger. One of the defining traits of WCW, especially in hindsight, was its ability to feature talent from around the world. As a New Japan Pro Wrestling star, Liger was able to work WCW matches against the likes of Ultimo Dragon, Eddie Guerrero, and Rey Mysterio. However, it was his first major program, against Pillman in the early 90s, that helped establish Liger to American audiences.

Pillman and Liger faced each other in the first WCW Monday Nitro match and they delivered. While this may not have been their best outing together – their Light Heavyweight Championship match at SuperBrawl II is the one many fans fondly remember – it helped showcase the cruiserweight wrestling style that WCW popularized. It would go on to become the “hook” of future WCW shows, getting audiences amped up for what would follow. Of the three matches on the first episode of Nitro, this is the one worth revisiting.

The second match of the night pit Ric Flair against WCW United States Heavyweight Champion Sting. Given that these men have been synonymous with WCW, it was only appropriate that they would be involved in the first episode of WCW Monday Nitro. Their rivalry, which helped put Sting on the map, is among the classics in wrestling history. Many years later, they would face each other on the final episode of Nitro before WCW was finally absorbed by the WWF. In other words, Flair and Sting are forever linked.

Before this match went underway, they, along with the viewers at home, were stunned by the return of Lex Luger. To provide context, Luger had been with the WWF from 1993 to 1995. During the latter year, his contract expired, which allowed him to jump to WCW. Luger accepted a deal from Bischoff, making his return on the debut episode of Nitro. Despite the popularity of Flair and Sting, the attention was firmly placed on the former United States flag bearer of the WWF. Matters were further compounded by the arrival of Arn Anderson, who had his issues with Flair during this time. The match ended in chaos, Anderson and Flair engaged in fisticuffs.

Following a brief encounter between Scott Norton and “Macho Man” Randy Savage, the latter being among the many former WWE talents acquired by WCW – and a few hype videos, WCW Monday Nitro shifted focus to the main event. Big Bubba Rogers, formerly known as Big Boss Man in the WWF, challenged Hulk Hogan for the WCW World Heavyweight Championship. It’s important to note that “The Hulkster’s” popularity in WCW hadn’t dropped off at this point. In fact, WCW had so much faith in him as a fan favorite that they built a food brand in his image known as “Pastamania.” 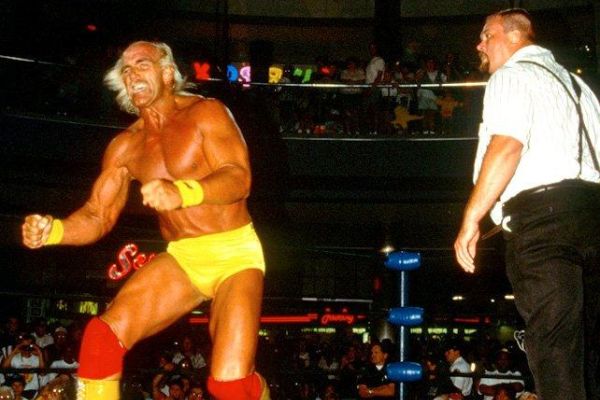 In terms of the aforementioned main event, it’s formatted much like any Hogan match during his time as a babyface. Rogers was in control for most of the match until Hogan began to hulk up like only he could. One big boot and leg drop later and Hogan retained his title. However, it would be the post-match faceoff with Luger that fans remember most. After The Dungeon of Doom rushed the ring to attack Hogan, Luger intervened to help him fight off the nefarious group. Hogan and Luger’s argument prompted Sting and Savage to play peacemakers.

With the help of “Mean” Gene Okerlund, WCW attempted to get answers from Luger. “The Total Package” didn’t mince words; he had his sights set on Hogan and the WCW World Heavyweight Championship. Luger wanted to fight “where the big boys played” oin WCW. An exhausted yet passionate Hogan had no qualms about facing Luger on next week’s WCW Monday Nitro. One handshake later and the main event of the next show was set. 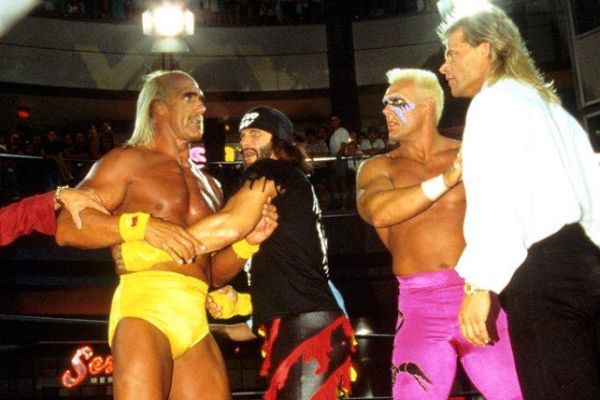 The Legacy of the First Nitro

Admittedly, the debut of WCW Monday Nitro won’t be remembered for its in-ring action. While the aforementioned match between Pillman and Liger was entertaining enough, the rest of the show was very run-of-the-mill. However, it was historical for multiple reasons, including the WCW return of Luger. However, it marked an important moment in professional wrestling history. With WCW moving to primetime television, it was an undeniable shot fired in the Monday Night War. For the next several years, RAW and Nitro locked horns during Monday night programming.

WCW’s flagship show wasn’t a major success out of the gate. It wasn’t until June of 1996 that WCW began to consistently best the WWF in the ratings. Until April of 1998, Nitro routinely beat RAW, building a streak of 83 weeks that is talked about to this day. Due to the popularity of Nitro, as well as the rise of fresh talent in the WWF like “Stone Cold” Steve Austin, McMahon had little choice but to take his product in an edgier, more adult-oriented direction. This resulted in the “Attitude Era,” one of the highest points in popularity the WWF enjoyed. Without the success of Nitro, this renaissance of sorts may not have come to pass.