After last season’s seventh-placed finish, many supporters would not have expected Union Berlin to surpass that feat. However, Urs Fischer’s side ended their third Bundesliga season in fifth place, thus qualifying for the Europa League. Die Eisernen also reached the semi-final of the DFB-Pokal, losing out to eventual winners, RB Leipzig. Here is our Union Berlin Season Review.

Union Berlin are well known not to spend beyond their means but the Köpenick club twice broke their transfer record in the summer. First, Fischer bought in Polish left-back Tymoteusz Puchacz from Lech Poznan in a deal worth €3.5 million before spending almost double that to land Liverpool striker Taiwo Awoniyi following an impressive season-long loan in the previous campaign.

As usual, Union do things smartly in the transfer window and saw the arrivals of Kevin Behrens, Genki Haraguchi and Andreas Voglsammer, among others, all on free transfers.

Union did lose two players in the summer that many fans would have been upset to see depart, with Marius Bulter and Robert Andrich joining Schalke and Bayer Leverkusen respectively.

📺 Top 5 goals of the season

Have we missed your favourite? ☝️ pic.twitter.com/IZCyLsv5th

Strong Start to the Season

Union Berlin would lose just one of their opening nine Bundesliga games, quickly propelling them into the top five of the table. Home wins over Borussia Monchengladbach, Arminia Bielefeld and Wolfsburg made it four games unbeaten at the Stadion An der Alten Försterei before a 5-2 defeat against actual champions, Bayern Munich.

But Union also looked solid on their travels, losing just once from their opening five away fixtures. Back at home, Die Eisernen bounced back from the Bavarian barricade with victories over Hertha Berlin (the first of three) and RB Leipzig.

Not only did Union make early strides in the Bundesliga, but they also made positive impressions in both cup competitions.

In the Pokal, Union won away at Türkgücü München and Waldhof Mannheim before a 3-1 victory at the Olympiastadion against Hertha.

Having qualified for the inaugural Europa Conference League, the national stadium would also be their home for the competition due to UEFA’s ruling of all-seater stadia. Union lost at Slavia Prague on the opening matchday but secured their first win at ‘home’ against Maccabi Haifa.

Back to back defeats against eventual finalists Feyenoord dented their chances of progression, before winning away in Isreal and drawing at home against the Czech side on the final matchday. Union finished third, one point behind Slavia Prague.

Back to the Bundesliga

Domestically, Union were still pushing for another European qualification finish. Despite losing two key players in Marvin Friedrich and Max Kruse during the January transfer window, the club moved up to fourth following a win away at Monchengladbach.

Three successive defeats, followed by just one win from their next four, knocked Union down a few places, but they bounced back with six wins (including a 4-1 away success against Hertha) and one draw from their remaining seven Bundesliga fixtures to secure fifth place. 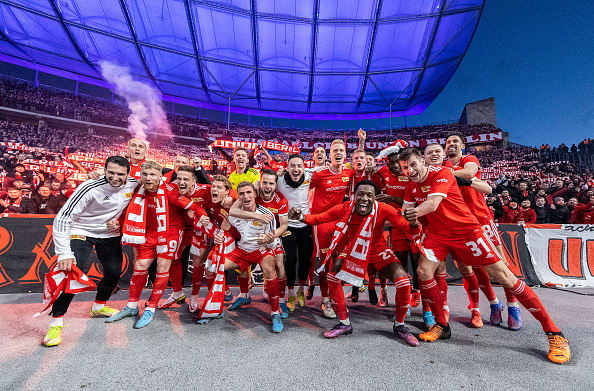 Following a 2-1 win over St. Pauli, Union drew Leipzig in the Pokal semi-final. However, a 2-1 defeat at the Red Bull Arena ended their chance of a cup final fixture in their home city.

Union would get their own back in Leipzig just three days later, picking up a vital three points in the Bundesliga.

Taiwo Awoniyi was Union’s standout player over the course of the campaign. The Nigerian netted 20 goals in all competitions, including 15 in the Bundesliga, making him the club’s highest top-flight goalscorer.

Kruse chipped in with eight goals before his return to Wolfsburg, while four players found the net six times each.