Arsenal are not exactly charging into the top four. Their narrow 2-1 win over a ten-man Leeds United side that is fighting relegation was hardly conclusive proof that they are ready to take the next step and secure their position in the Premier League’s top four. Nevertheless, the victory sends them four points clear of Tottenham Hotspur, giving the Gunners a little wiggle room ahead of the crucial North London Derby this Thursday.

Eddie Nketiah appears determined to take his chance, and his chances, to become an Arsenal late-season legend, a la Kevin Campbell in 1991 and Freddie Ljungberg in 2002. His two goals against Leeds, which were both classic Ian Wright-type efforts from inside the box, made it four goals in four games after his double against Chelsea at Stamford Bridge in the victory that brought Arsenal’s season back to life after the devastating trilogy of defeats against Crystal Palace, Brighton & Hove Albion and Southampton.

Nketiah has reanimated Arsenal’s season by reanimating the team’s attack. Indeed, such has been the difference that his pace, pressing and finishing have made to the Gunners that it must be asked why Mikel Arteta persisted with Alexandre Lacazette for so long after Pierre-Emerick Aubameyang left the club in the January transfer window. Lacazette’s hold-up play is generally better than that of Nketiah, but otherwise, Nketiah has surely proven that if Arsenal are going to keep either of their two current strikers after their contracts run out this summer, it must be him.

Arsenal’s Other Forwards Need to Be As Ruthless

However, the reason why Arsenal did not completely kill off Leeds after Nketiah’s two goals had put them two up within ten minutes was because the team as a whole, and in particular Nketiah’s fellow forwards, failed to follow his lead by ruthlessly taking their chances. Although Nketiah himself could arguably have done better with a third effort that would have completed his hat-trick, when, as Ian Wright himself said afterwards on Match of the Day, he should probably have gone with his head rather than his boot, the main offender was Gabriel Martinelli.

The brilliant young Brazilian winger, or wide attacker (as wingers are so often called now), created Nketiah’s second goal with a wonderful, weaving run and cut-back into the penalty box. However, perhaps because he was still shaking after Leeds’s Luke Ayling had virtually scythed him in two to get his red card, he failed to take any of the good opportunities that fell to him, especially the one at the start of the second half, that would have prevented any possibility of a late Leeds comeback. Certainly, all of Arsenal’s young attackers, Nketiah included, will need to be far more ruthless against Spurs, when they are likely to get few chances and will have to make the most of any chances they do get. 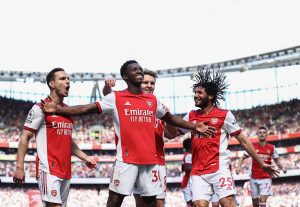 Arsenal’s Prospects Ahead of the North London Derby

Nevertheless, although Arsenal should have won far more comfortably against Leeds than they did, the three points that they secured against the Yorkshire side were enough to send them four points clear of fifth-placed Spurs ahead of the North London Derby – aka Champions League Play-Off – later this week. As a result, Arsenal can even afford to lose to Spurs and still qualify for the Champions League ahead of them if they win their other two fixtures, against Newcastle United away and Everton at home.

That four-point buffer between them and Spurs allows Arsenal to go into the North London Derby knowing that if they win they will have secured Champions League qualification with two games to go, which would be an astonishing achievement for Mikel Arteta and his team, especially after losing their first three games of the season. Consequently, although an away win at Spurs in 2022 would not quite rank alongside those of 1971 and 2004, which secured Arsenal League titles in victories at White Hart Lane, it would still probably go down as Arsenal’s third greatest win over their old enemy.

However, as a result of beating Leeds, Arsenal also know that even if they lose to Spurs this week, they will still be ahead of them going into the last two games of the season.  In one sense, that means that Spurs will probably be more motivated than Arsenal to win on Thursday, as they know that realistically only a victory will be enough to maintain their Champions League challenge. On the other hand, it also means that Arsenal can be more relaxed than Spurs, knowing that the home team will have to come on to them, which goes directly against Antonio Conte’s own preferred style of counter-attacking.

If Arsenal Lose At Spurs, Newcastle Will Loom Large

Nevertheless, despite their four-point lead over Spurs, Arsenal cannot afford to be complacent. That is because if they lose at Spurs, they will only be a single point ahead of their North London rivals going into the last two fixtures of the season, and they will undoubtedly face the tougher fixtures of the two, especially the away game at Newcastle.

The Magpies may have been hammered by Manchester City, as Pep Guardiola’s side recovered from their Champions League exit in spectacular style, but they have still been one of the most impressive sides of 2022 so far. The game against Arsenal will be their last home game of the season and coincidentally it will be the last game of the penultimate Premier League weekend, on the evening of Monday, May 16, making it exactly the high-pressure, under-the-lights test that Arsenal have already failed three times this season, at Brentford, Everton and Crystal Palace.

Consequently, despite the four-point lead that they currently have over Spurs, Arsenal will be desperate to at least avoid defeat when the two North London rivals meet on Thursday night. Otherwise, if they lose to Spurs and Spurs then beat Burnley at home, Arsenal will go to Newcastle knowing that they have to win. Mikel Arteta and his young men will be desperate to try and avoid that eventuality at all costs and of course, the best way for them to do so is by winning, or at least avoiding defeat, at Spurs.