Live from the Frederick J. Sigur Civic Center in Chalmette, Louisiana, the National Wrestling Alliance is set to hold NWA Hard Times in New Orleans. As the third event under the Hard Times banner, the NWA looks to bring its unique brand of pro wrestling to The Big Easy. Main evening this year’s Hard Times will be a three-way contest for the NWA Worlds Heavyweight Championship pitting the titleholder against a former champion that relinquished said belt due to injury and a former NWA World Television Championship holder aiming to cash in. The action airs live on November 12. For those attending in person, a TV taping for NWA Powerrr and NWA U.S.A., collectively entitled Revolution Rumble, will take place the next day. Here’s what to expect heading into NWA Hard Times 3. 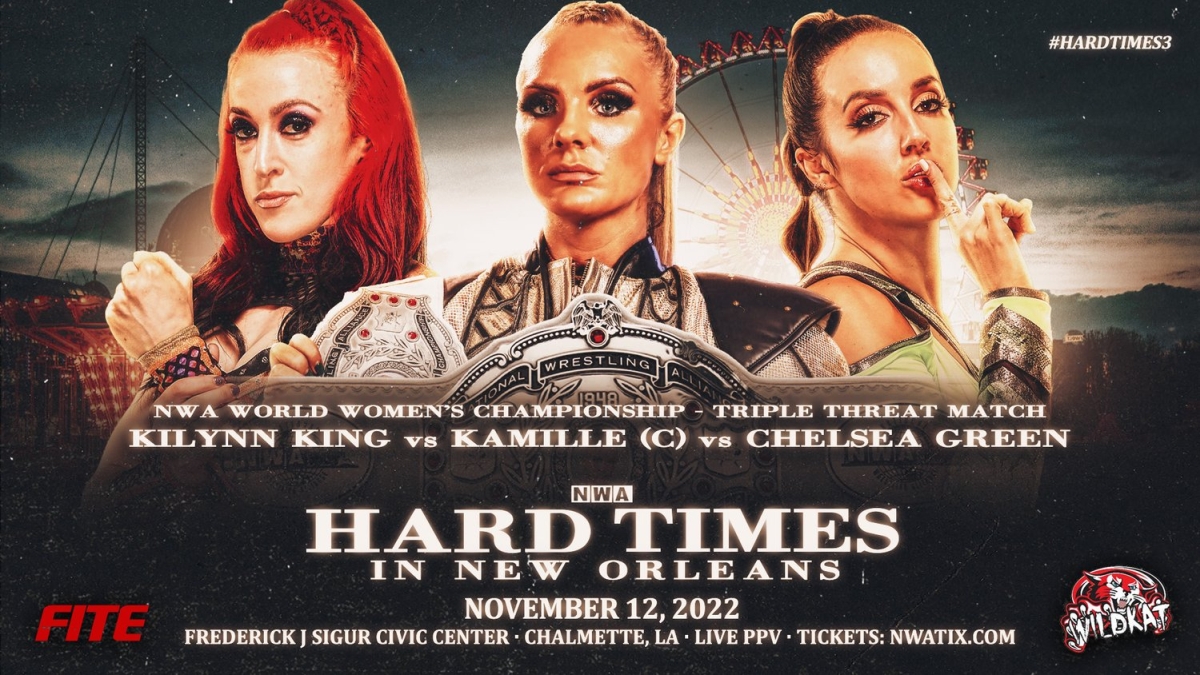 The dominant NWA World Women’s Champion, Kamille, is set for action at Hard Times in New Orleans. However, she’ll have a major mountain to climb as she defends “The Burke” against KiLynn King and Chelsea Green. The way that this match came to fruition is nothing short of interesting, either. Kamille has faced off against King on numerous occasions, most recently at the NWA Alwayz Ready event back in June. This was one of the best bouts during the show, with viewers considering it the match of the night. Despite King’s best efforts, she was unable to best “The Brickhouse” for the women’s title. However, when King won a number one contender’s bout earlier this fall, the Team 3D Academy graduate was back in the title picture.

Originally, Kamille and King were set to square off in a singles match at NWA Hard Times 3. Enter Chelsea Green, who previously secured a title opportunity during NWA’s Champions Series. In short, this allowed “The Hot Mess” to challenge for the NWA World Women’s Championship at any opportunity. Ultimately, she decided to make Hard Times in New Orleans her stage, transforming the aforementioned singles bout into a three-way contest. Can Kamille retain the gold in perhaps the most challenging match of her career? Will King capture her first NWA women’s title after multiple attempts? Perhaps it will be Green who seizes the opportunity. Whatever the result may be, this is a match not to miss. 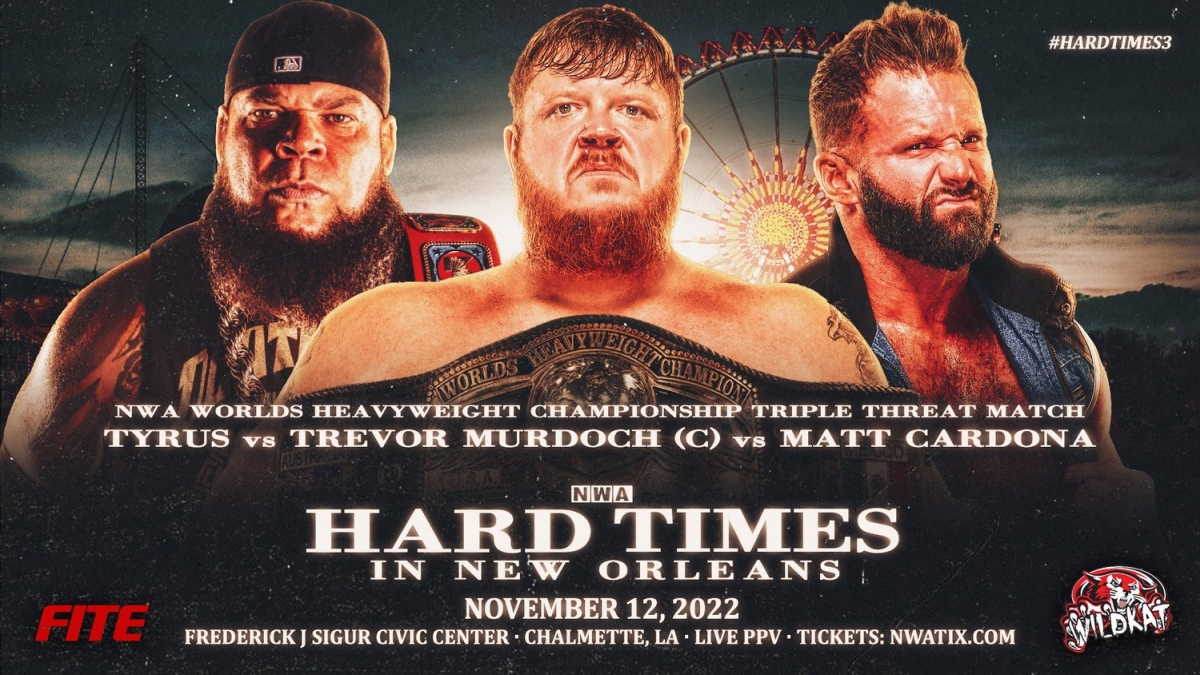 In the main event of NWA Hard Times in New Orleans, Trevor Murdoch defends the NWA Worlds Heavyweight Championship against “Alwayz Ready” Matt Cardona and the former NWA World Television Champion, Tyrus. A 2x NWA world titleholder, Murdoch captured “The 10 Pounds of Gold” for the second time at this past June’s Alwayz Ready event, named after Cardona himself. Murdoch competed in a four-way contest for the vacant title, besting Nick Aldis, Thom Latimer, and Sam Shaw, the latter currently known in WWE as Dexter Lumis. As the grizzled brawler, Murdoch could be considered by many as a solid choice to represent the NWA as its top champion. However, the matter in which he won the title set him on a collision course with Cardona.

At Game Changer Wrestling’s Downward Spiral event in May, Cardona faced Blake Christian. During the course of the match, Cardona suffered a torn bicep. Originally, at Alwayz Ready, Cardona was scheduled to defend the NWA Worlds Heavyweight Championship against Nick Aldis. Due to said injury, Cardona was forced to vacate the championship. Despite what many believe to be an arrogant persona on his part, Cardona would be in the right by claiming he never officially lost the title. Thus, an NWA Worlds Heavyweight Championship against Trevor Murdoch seemed like a no-brainer. In fact, up until September, this was the scheduled main event for NWA Hard Times 3.

Enter Tyrus, who had come off a loss to Murdoch in their NWA Worlds Heavyweight Championship match at NWA 74. Not allowing the world title to leave his sights so easily, Tyrus capitalized on the “Lucky 7” rule associated with his NWA World Television Championship. Essentially, after 7 successful title defenses, the TV Champion could vacant the belt in exchange for an NWA world title match. Thus, Tyrus relinquished the title and was added to the NWA Hard Times in New Orleans main event. Now with 2 major obstacles to overcome, Hard Times 3 has become a do-or-die situation for Murdoch. Between the craftiness of Cardona and the sheer power of Tyrus, Murdoch will have to pull out all the stops if he intends on leaving New Orleans still the NWA Worlds Heavyweight Champion.

Stay tuned to the Last Word on Pro Wrestling for more on this and other stories from around the world of wrestling, as they develop. You can always count on LWOPW to be on top of the major news in the wrestling world, as well as to provide you with analysis, previews, videos, interviews, and editorials on the wrestling world. NWA Hard Times in New Orleans will air live on November 12 at 6 PM CST on FITE. Tickets can be purchased via Eventbrite.