Gatoh Move Pro Wrestling promises an eventful weekend with a doubleheader. The Gatoh Move crew is set to hold ChocoPro #220 and ChocoPro #221, the former featuring three matches and the latter two. Furthermore, fans will see returning guest stars step back into Ichigaya Chocolate Square, looking to take on familiar and new challenges alike. There’s plenty to catch up on, so for the sake of brevity, both shows will be consolidated into one preview. Included are the full cards for the shows and a few highlights to keep an eye on before each event takes place. Here’s what to expect.

In the main event of ChocoPro #220, Yuko Sakurai of COLOR’S Girl’s Prowrestling Unit! makes her return to the show as she takes on the mischievous “Apple Girl” herself, Mei Suruga. Sakurai has been incredibly busy as of late, not only in her home promotion of COLOR’S but Ice Ribbon as well. In fact, it’s the latter where she’s become most prevalent as of late, often teaming in tag team and multi-person encounters. However, this versatile powerhouse has been itching to get back to Ichigaya Chocolate Square. Keep in mind that she last appeared on ChocoPro back on Episode #206 this past February, where she lost alongside Shin Suzuki to Baliyan Akki and fellow Actwres girl’Z star SAKI. Needless to say, Sakurai is looking to get back to her winning ways.

Against an opponent as formidable as Mei Suruga, however, this will be easier said than done. This is especially true when considering this isn’t the first time these two will square off. Whether one-on-one or in tag team competition, Sakurai’s time in Gatoh Move has involved “Mei-chan” to a certain degree or another. An interesting statistic that would tip the scale in Suruga’s favor is that of the 24 ChocoPro matches she’s wrestled this year so far, she’s won 20 of them. Whenever “The Apple Girl” is in action, one would be wise to bet on her. From Tokyo Joshi Pro-Wrestling to World Wonder Ring Stardom, Suruga’s star continues to rise in joshi puroresu and a victory over Sakurai on ChocoPro #220 will only accelerate her growth. 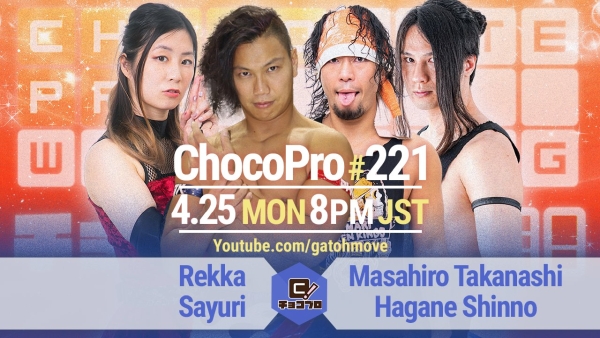 Another name making their return this weekend is Rekka, who Japanese independent wrestling fans may know for his recent work in Colega Pro Wrestling, Pro Wrestling FREEDOMS, and All Japan Pro Wrestling, just to name a few examples. For those that are less familiar, Rekka is a wrestling veteran with well over 18 years of experience under his belt. He’s also incredibly familiar with ChocoPro, last appearing on Episode #163 this past October, not to mention Gatoh Move as a whole. In fact, he’s made appearances for the purple-and-yellow promotion even before the conception of ChocoPro, which makes him among the more seasoned wrestlers in the company’s history. Given that his previous Gatoh Move appearance resulted in a loss, not unlike Sakurai, Rekka is making his return with the goal of victory in mind.

On ChocoPro #221, Rekka steps foot in Ichigaya once again, this time to team with Sayuri to take on the veteran duo of Hagane Shinnou and one-half of the Asia Dream Tag Team Champions, Masahiro Takanashi. Sayuri made her full-time in-ring return last month and has been a consistent fixture on these shows since then. The “Kunoichi” last appeared on Episode #217, losing to Best Bros alongside Dragon Ninja partner Chon Shiryu. Meanwhile, whenever Shinnou or Takanashi are in action on ChocoPro, they tend to be on the winning side of things. This is particularly true for Takanashi, who’s both a veteran wrestler and one of the company’s three titleholders. Can Rekka make his return a successful one or will the combined efforts of Shinnou and Takanashi dash his ambitions?