Game Changer Wrestling’s time in the California area is far from home. Fresh off GCW Paranoid, the independent wrestling powerhouse will return with GCW Devil in a New Dress, set to air live from The Midway in San Francisco. From “Speedball” Mike Bailey to New Japan Pro-Wrestling legend Minoru Suzuki to former Ring of Honor world titleholder Bandido, there will be many notable names set to appear and compete. As mentioned earlier, the action will unfold at The Midway, so those in the area may wish to make the trek. For those that cannot, the action can be seen live on FITE. Here’s what to know before the event to take place this Sunday. 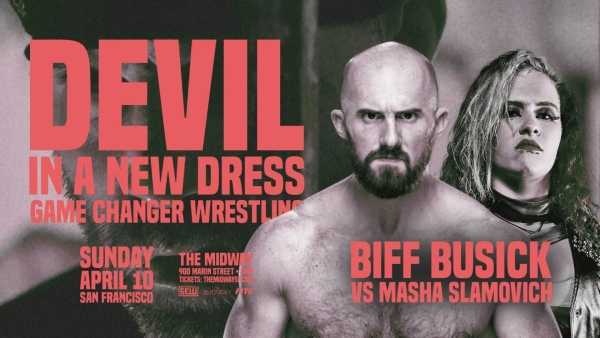 In one of the more intriguing matches of GCW Devil in a New Dress, Biff Busick faces Masha Slamovich in a first-time match. To say that Busick had an eventful WrestleMania Week would be an understatement. Those that watched Josh Barnett’s Bloodsport 8 will have seen him take on fellow former WWE star Jon Moxley in a grueling encounter. A bloody Busick gave it his all, and while it was Moxley that emerged victorious, “The Star Destroyer” came away with more respect by the end. The following night, at Joey Janela’s Spring Break 6 Part 2, Busick locked horns with Tony Deppen. The former NXT Tag Team Champion encountered many opponents during his career, though Slamovich is a different breed entirely.

Not unlike her Devil in a New Dress opponent, Slamovich had a presence at Bloodsport 8 as well. On this show, she took on, and defeated, Janai Kai in the opening contest. Furthermore, “The Russian Dynamite” has been incredibly busy on the independent scene outside of The Collective, whether in Blitzkrieg! Pro, Mission Pro Wrestling, among other organizations. When it comes to women’s wrestling on the indies, Slamovich is a name that routinely pops up and for good reason. She’s also not one to shy away from the most grueling of challenges, as her aforementioned recent Bloodsport contest has illustrated. Thus, she should feel right at home when she battles Busick this Sunday. 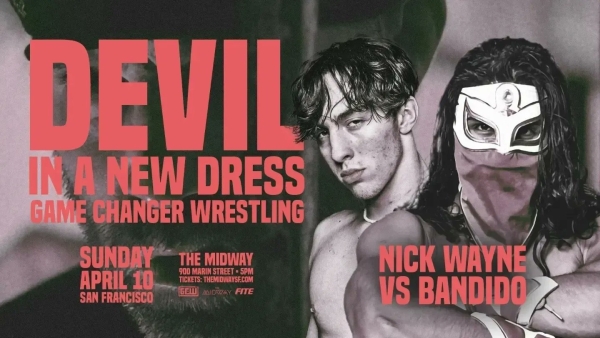 For the first time since January, Bandido steps into Game Changer Wrestling. The former ROH World Champion’s last appearance in the promotion was at The Wrld On GCW, which saw him, Laredo Kid, and ASF face Arez, Demonic Flamita, and Gringo Loco in a losing effort. Despite this, their six-man tag team contest was arguably the most well-received of the night. Anyone that’s familiar with Bandido’s collection of work should see this as little surprise, however. Whether in ROH, Pro Wrestling Guerrilla, or otherwise, this luchador’s work speaks for itself. At GCW Devil in a New Dress, he will step into The Midway to take on a young star that seems poised for greatness.

With an All Elite Wrestling contract in his possession, it’s fair to assume that 16-year-old Nick Wayne will step into said promotion once he becomes legally of age to do so. In the meanwhile, his work on the independent scene continues, with him showcasing his potential on a number of platforms. Much like his fellow GCW regulars, Wayne had a busy week during The Collective. He appeared at both nights of Joey Janela’s Spring Break 6, not to mention LA Fights vs. JCW. In the latter event, the multi-generational star from Seattle picked up a big win over Marcus Mathers. Given Bandido’s recent status as a world champion, however, Wayne will have to work that much harder if he hopes to have his arm raised by the closing bell. 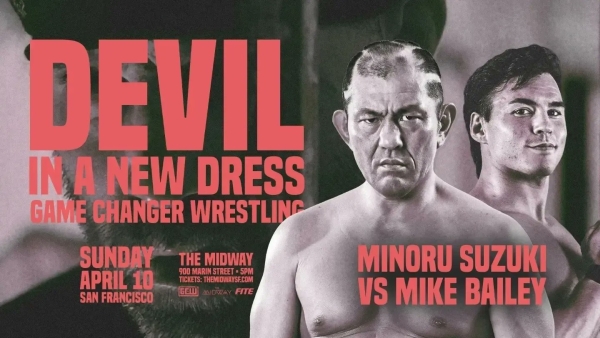 At GCW Devil in a New Dress, “Speedball” Mike Bailey steps up to one of his most dangerous challenges to date in Minoru Suzuki. This isn’t to say that Bailey is a stranger to adversity, as fans of his work will attest. From battling Alex Shelley at IMPACT Wrestling’s recent Multiverse of Matches event to squaring off with the imposing JONAH at Limitless Wrestling’s The Thrill of It, “Speedball” is nothing if not fearless. Said fearlessness has made him a champion in various organizations, including DDT Pro-Wrestling and, more recently, the Canadian-based Capital City Championship Combat promotion. Bailey has every right to be confident, though it shouldn’t cloud his mindset as he faces the devastating “King” in Suzuki.

When he steps on American soil, one can argue that Minoru Suzuki is treated like a god of professional wrestling. At the age of 53, he continues to wrestle at a high level and his penchant for inflicting pain on a variety of opponents is as strong as ever. His presence was felt during The Collective as well, taking the fight to Chris Dickinson at Bloodsport 8 and EFFY at Joey Janela’s Spring Break 6. Suzuki will have also been in action at GCW Paranoid, taking on the up-and-coming Blake Christian. Suzuki has become accustomed to facing the younger names in independent wrestling and his upcoming match against Bailey will be no exception. Watch this contest unfold this Sunday evening.

GCW Devil in a New Dress will take place in Los Angeles, California on April 9, 2022.

Stay tuned to the Last Word on Pro Wrestling for more on this and other stories from around the world of wrestling, as they develop. You can always count on LWOPW to be on top of the major news in the wrestling world, as well as to provide you with analysis, previews, videos, interviews, and editorials on the wrestling world. GCW Devil in a New Dress is set to air Sunday at 5 PM PDT on FITE. Tickets are also available via Tixr.