Eastern Townships Wrestling Association returns to action on Saturday night with ETWA Spring To The Top II, and the entire card feels must-see. Jay Freddie and Anthony Greene have both hand-picked opponents for each other as their feud continues to grow. The Saito Brothers are in action, going for tag team gold, and so much more! 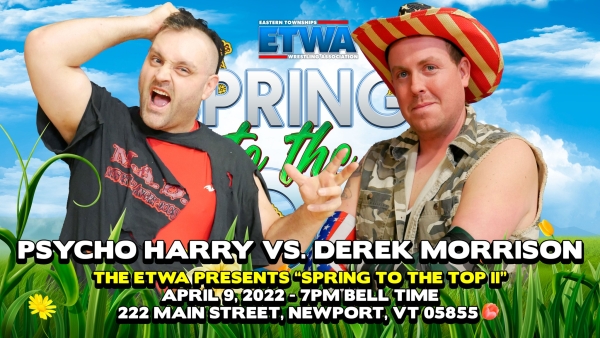 Psycho Harry has been making quite the statement since the return of ETWA. Derek Morrison will likely be looking to make a statement of his own. This is going to be a fun match because you kind of have to keep your eye on both of these wrestlers and this match feels important for them both as well. 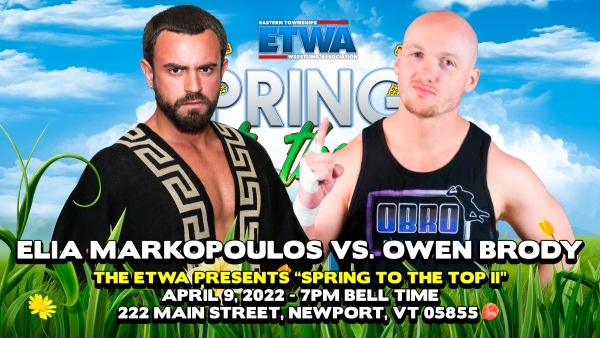 Elia Markopoulos has been making a name for himself throughout New England, in promotions like Top Rope Pro, for quite some time. Owen Brody has also been making a name for himself, but not for quite as long. This is the type of match where Markopoulos will look to teach Brody a thing or two inside of the ring, but perhaps Brody also feels as if he doesn’t need to learn a lesson. See this unfold at ETWA Spring To The Top II. 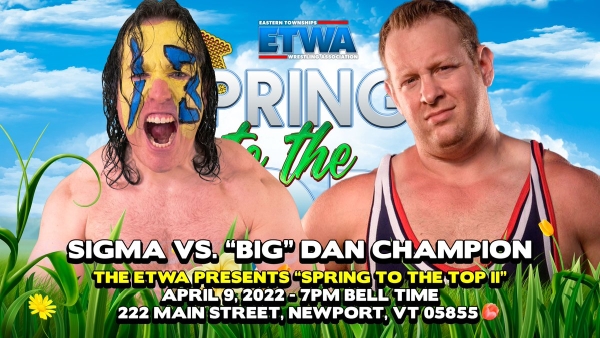 One name that has been making waves within ETWA since its return is Sigma. But, Sigma has not been in the ring with someone as big as Dan Champion yet and this might be the former’s largest challenge to date. Big Dan will be looking to make a statement in ETWA, as he tends to do everywhere that he goes, and Sigma will be looking for that huge win, but would it be a huge upset as well? Find out at ETWA Spring To The Top II. 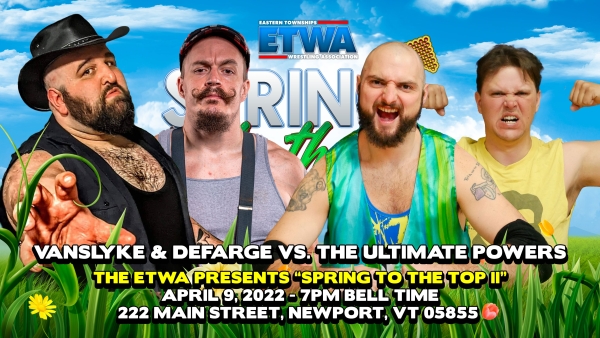 This tag team match is the perfect combination of fan favorites versus those who the fans like to boo, and if you’re not sure which team is which, you are obviously not familiar with Sonny Defarge. While this match could be an uphill battle for The Ultimate Powers, perhaps their advantage here is that the team of Brute VanSlyke and Defarge might not be on the same page. If VanSlyke and Defarge can work together they might very well be unstoppable, but that crowd support for Jobz and Mullet Man could give them the edge. 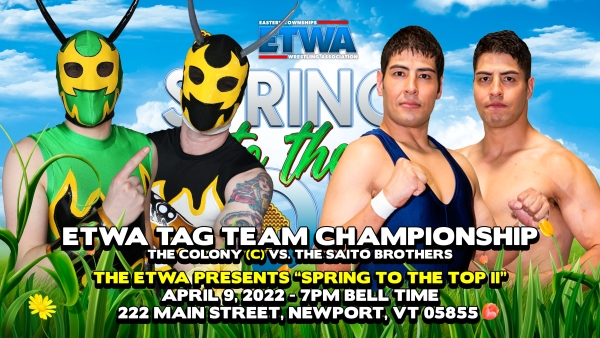 The Saito Brothers are such big powerhouses that you truly have to see them in person to fully grasp it. But with that power also comes an unprecedented amount of speed. The Colony seem to have that speed and high flying advantage, as they are at a disadvantage otherwise, but the idea of either of the Ants taking flight and being swatted out of the sky like bugs is not too far fetched. This might be one of those rare cases where the champions are considered to be the underdogs, and if betting is your thing, put all your money on the Saito Brothers. 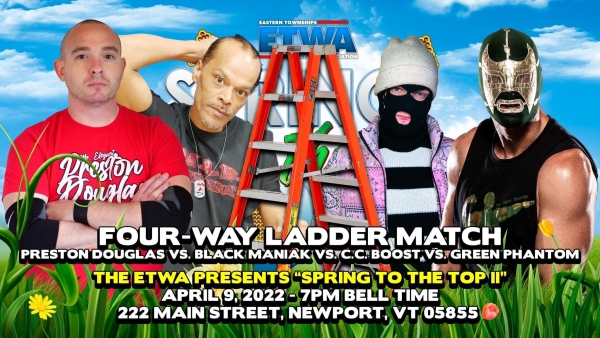 When you have four wrestlers inside of the same match and it feels like they’re just known for creating violence, you have to question why ETWA would add another layer of violence to all of this by adding ladders into the mix. C.C. Boost would likely have the advantage here, but this is just going to be absolute chaos and anyone’s match to win. 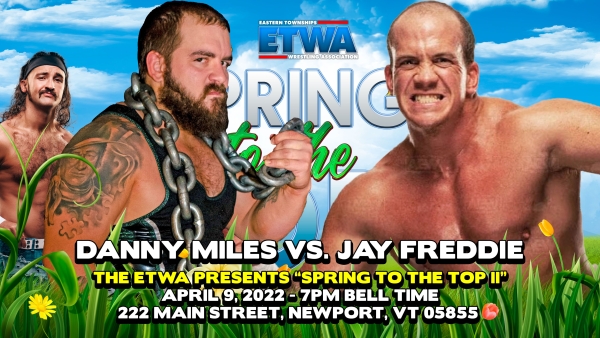 Anthony Greene has hand-picked this opponent for Jay Freddie and it is… Danny Miles. Best known perhaps for being part of The Unit in Chaotic Wrestling,  Miles is coming to ETWA on his own and won’t be able to play the numbers game here. Freddie is a world-traveled athlete who thrives in these types of situations and this might have been a bad choice by AG but only time will tell.

Jay Freddie hand-picked Avery Good to face Anthony Greene in this match of AG vs AG. Two of the best at what they do in the game right now, this is going to be that type of main event match that people are talking about decades from now. This should be a technical classic and perhaps the best display of pure wrestling seen all weekend. This is a match which every wrestling fan should go out of their way to see.

All of this action goes down live, Saturday, April 9th, 2022 from Newport, VT! For tickets and more information, please visit: https://www.etwaprowrestling.com/

Stay tuned to the Last Word on Pro Wrestling for more on this and other stories from around the world of wrestling, as they develop. You can always count on LWOPW to be on top of the major news in the wrestling world. As well as to provide you with analysis, previews, videos, interviews, and editorials on the wrestling world. You can learn more about ETWA on Facebook and Twitter.