With the winter weather finally seeming to stop, Chaotic Wrestling is back for the second Friday in a row and this is also their last stop before Cold Fury! Five matches have been announced thus far as Chaotic Wrestling presents As We Should. This entire card seems to be helping mold Cold Fury in April. 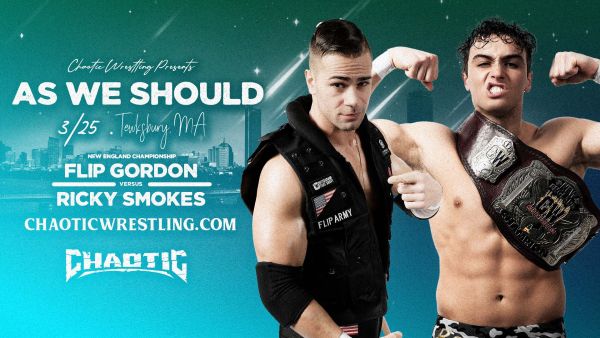 What happens when you challenge for the Chaotic Heavyweight Championship and lose? If you’re Flip Gordon, apparently you get to challenge for the CW New England Championship, which doesn’t make an iota of sense. Ricky Smokes can easily just watch the match back from last week when JT Dunn defeated Gordon and use that as a blueprint for a successful title defense. Maybe when Gordon loses all of his title shots, he can finally just go away. 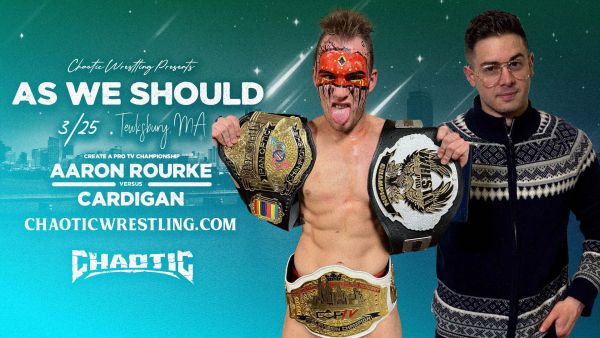 Somehow this is a Create A Pro TV Championship title defense- one of the three championships currently held by Aaron Rourke– and not a Pan Optic Championship title defense, but let’s just go with it. Rourke has been on an absolute tear lately and it doesn’t seem like it will stop any time soon, not even at Cold Fury. Phil Cardigan has been in Chaotic Wrestling here and there, but is perhaps best known for being part of the Create A Pro Wrestling roster. This very well might be Cardigan’s brightest moment to shine and even possibly end up as a more regular part of the Chaotic Wrestling roster as well. 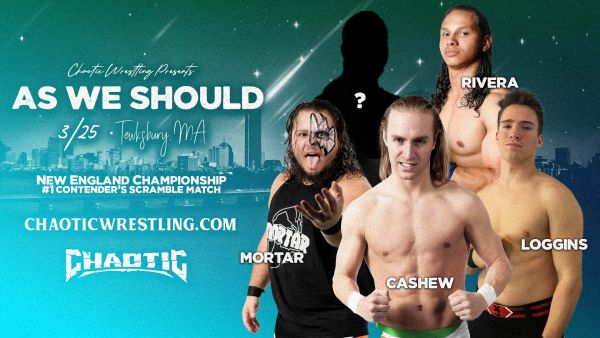 While this match will have a fifth mystery opponent in it, the winner will go on to face the CW New England Champion at Cold Fury. Though it really could be anyone’s match to win, the idea of the mystery opponent being in here leaves a lot up in the air because someone like Max Smashmaster could emerge and destroy everyone. Chris Loggins is a relative newcomer, but could make a statement with a win here; the same could be said for Randy Rivera, who should be eying that breakout moment at Cold Fury.

Brad Cashew has the most history with the New England Championship as he technically lost it when current champion Ricky Smokes used the ropes for leverage. Having a stipulation match to prevent that at Cold Fury would see some sort of vengeance for Cashew, though perhaps he should also have his sights set on JT Dunn and the Chaotic Wrestling Heavyweight Championship. Mortar could perhaps be the best pick to win here, as him wearing gold seems long overdue. Watch this Scramble Match hold as Chaotic Wrestling presents As We Should.

3 teams confirmed for the Tag Gaunlet

What can only be assumed about this bout, since it is a Gauntlet Match, is that two teams will start and another team will enter until there is only one team left standing. At this point, two members of The Unit will likely come down and defend their titles against whoever is the winners and has just gone through at least one other match. This is the type of situation which favors The Unit, but hey, they run Chaotic Wrestling, so why not put themselves into matches that seem to favor them? It’s just smart.

In many ways, this match is bringing a story full circle and is a nice way to tie up loose ends before Cold Fury. As it was announced last week, at Cold Fury, Davienne will be receiving her rematch for the Chaotic Wrestling Heavyweight Championship inside of a steel cage! Back in January, Davienne was robbed of that very title by JT Dunn with a little help from Alisha Edwards. After a match in February, it seemed as if these two would no longer have unfinished business, but some help from The Unit made sure that didn’t happen.

Now, Davienne will not only get her revenge against Edwards but put the wheels into motion to make that journey to Cold Fury and regain what is rightfully hers. This match might not come without interference by The Unit, since it is anything goes, but Davienne likely also has a plan in place for that. This time, Davienne is more dangerous than ever before because this time, she will be ready.

The Unit promises to be in action, though to what extent remains to be seen. All of this and more takes place this Friday night, March 25th, 2022, live from Tewksbury, MA. For tickets and more info please visit Chaotic Wrestling’s official website.