On this special edition episode of ChocoPro, deathmatch enthusiast Minoru Fujita celebrates 25 years in professional wrestling. Though Gatoh Move Pro Wrestling fans may know him as the former Super Asia Champion, having won the revived blue belt, this is far from the extent of his career. From Big Japan Pro-Wrestling to Pro Wrestling ZERO-ONE to FREEDOMS and beyond, if a fan is heavily involved in the independent Japanese wrestling scene, they know of Fujita. On ChocoPro #215, he celebrates his 25th anniversary with a big six-person tag team match. Let’s take a closer look. 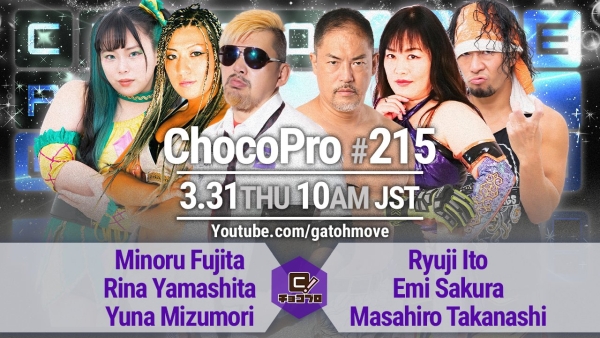 As detailed before, this match will be Minoru Fujita’s 25th-anniversary bout. Since the late 1990s, he’s been actively involved in the Japanese professional wrestling scene, slowly but surely crafting a style all his own. Today, he’s known for his deathmatch wrestling style, utilizing anything and everything to capture victories. However, since 2017, he’s made multiple Gatoh Move appearances as well, proving himself within the unorthodox purple-and-yellow promotion. Said appearances continued following the advent of ChocoPro, which saw him capture the aforementioned Super Asia Championship. Not only is Fujita a veteran but he’s one with partners by his side.

On ChocoPro #215, he teams with two individuals he’s had experience working alongside: Rina Yamashita and Yuna Mizumori. This past February, Fujita captured tag team gold alongside Yamashita, the two becoming King of FREEDOM Tag Team Champions. The self-proclaimed Tag Team Destroyers also wrestled multiple ChocoPro matches, even challenging Best Bros for the Asia Dream Tag Team Championship last year. Meanwhile, long-time ChocoPro fans will know of the grueling Last Man Standing bout that Fujita worked against Mizumori in May of 2020. Since then, the two developed mutual respect, having not only teamed up but coining the tandem name of Rotten Yahhos. Simply put, Fujita will have two of his most trusted allies by his side.

The trio of Fujita, Yamashita, and Mizumori will go toe to toe with Emi Sakura and Masahiro Takanashi, collectively known as Hyakkin Thunders, and the debuting Ryuji Ito. Longtime ChocoPro fans need no introduction to Sakura and Takanashi, both as singles wrestlers and a tag team unit. However, the inclusion of Ito is intriguing, to say the least. A notable BJW star, Ito steps into Ichigaya Chocolate Square for the first time on ChocoPro #215. The “Death Match Dragon’s” pedigree speaks for itself, as he’s a 2x BJW Tag Team Champion and 7x BJW Deathmatch Heavyweight Champion. In fact, his last reign was as recent as 2020. Can he make his Gatoh Move debut a success at the expense of fellow BJW stalwart Fujita?