To close out the week – or open it, depending on your time zone – Gatoh Move Pro Wrestling will be in a celebratory mood. It’s almost time for the ChocoPro 2nd-anniversary event and to say that it’s a big one would be an understatement. This has been eagerly anticipated, especially following the return of Gatoh Move’s founder to Japan. On this special edition episode, a total of four matches are booked. The action will conclude with a major Super Asia Championship defense. Without wasting any further time, let’s take a look at the offerings scheduled for ChocoPro #214. 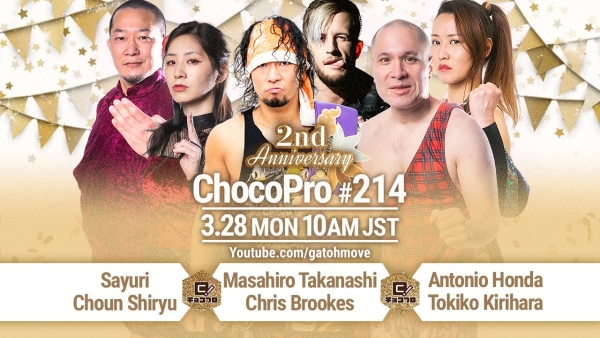 In one of the preliminary matches of ChocoPro #214, three of the show’s most notable teams will do battle. The current Asia Dream Tag Team Champions, Calamari Drunken Kings, will be in action as they take on Dragon Ninja and White Comaneci in a three-way bout. Despite the fact that their purple belts won’t be on the line here, Masahiro Takanashi and Chris Brookes can’t rest easy. Dragon Ninja, the duo of Sayuri and former Super Asia Interim Champion Chon Shiryu, promise to bring their ninja-inspired approach to the table. Meanwhile, Antonio Honda and Tokiko Kirihara of White Comaneci will ensure that, given their dastardly tactics, there won’t be a dull moment from bell to bell. If CDK were to lose here, it could also bring some intrigue to the Asia Dream tag team title picture. Keep an eye on what promises to be a chaotic three-way tag team match. 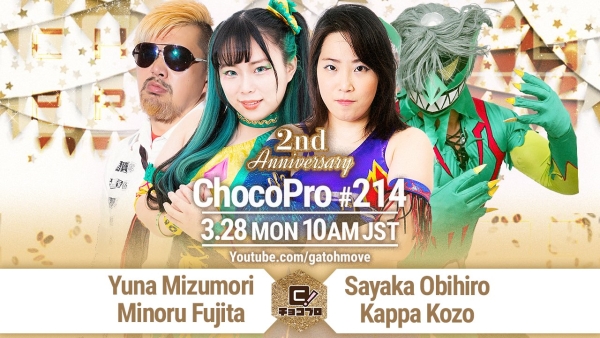 Professional wrestling can make for interesting partnerships; for proof of this, look no further than the team of Sayaka Obihiro and Kappa Kozo. The history of these veterans predates ChocoPro, as they’ve met in not only Gatoh Move but Ice Ribbon in the years prior. When Kozo made his way to ChocoPro late last year, it wasn’t long until he locked horns with Obihiro. Despite their grudge, they’ve proven to be a capable team when, on Day 2 of Episode #200, they bested White Comaneci. Simply put, rivals came together as partners. This will be no different on ChocoPro #214, as they take on former Asia Dream tag team titleholder Yuna Mizumori and former Super Asia Champion Minoru Fujita. Mizumori and Fujita have had their own encounters in ChocoPro, both as opponents and partners. Thus, it’s safe to say they’ll give their opponents a challenge. 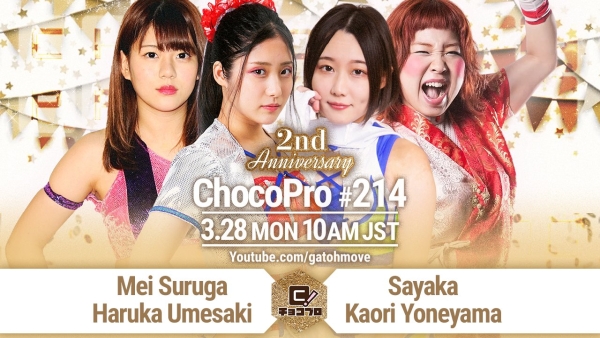 Mei Suruga and Haruka Umesaki vs. Sayaka and Kaori Yoneyama

In this tag team encounter, Emi Sakura proteges Mei Suruga and Haruka Umesaki take on the up-and-comer and veteran duo of Sayaka and Kaori Yoneyama. This match marks the ChocoPro return of Umesaki, who’s worked in such locations as Pro Wrestling WAVE, Sendai Girls, and home promotion World Woman Pro-Wrestling Diana this year alone. She’ll also be entering this match as both a WAVE and Diana tag team titleholder. Teaming with Umesaki is Suruga, who’s a former tag team titleholder in Gatoh Move and Tokyo Joshi Pro-Wrestling. It’s important to note that Suruga and Umesaki have been rivals in various organizations. Across Japan, they exchanged wins and losses. Case and point, Umesaki’s last ChocoPro appearance was back on Episode #121 this past May, where she fell to “The Apple Girl.” On ChocoPro #214, they must get on the same page if they intend on defeating the game Sayaka and Yoneyama tandem.

In the main event of ChocoPro #214, Baliyan Akki makes his second Super Asia Championship defense. He last defended the title against Ken Ohka of Ganbare Pro in a Falls Count Anywhere earlier this month. Akki’s second defense will be his greatest challenge yet, however, as he takes on “The Queen” herself, Emi Sakura. Up until this point, Sakura has had a few matches to get reacclimated to Ichigaya Chocolate Square. She’s been away from the promotion for over seven months, competing in America for All Elite Wrestling; those that regularly tune into AEW Dark and Dark: Elevation on YouTube have seen her lock horns with the company’s various women’s wrestlers. During her absence, she left her company in various capable hands, including Akki’s. Given that he’s been instrumental in the company’s development, especially following the COVID-19 pandemic, this should come as little surprise. On this special anniversary episode, sentimentality is set aside as they compete with the Super Asia title on the line.