ChocoPro #213 marks the final stop before the 2nd-anniversary event. The anticipation has been building for weeks and it’s a show that, on paper, has incredible promise. However, before we reach this point, we have this last stop, featuring a two-match card that includes core ChocoPro competitors and guest stars alike. All of the action will unfold live on the official Gatoh Move Pro Wrestling YouTube channel; if you’re unable to watch live, the show will be available on-demand afterward. Let’s take a closer look. 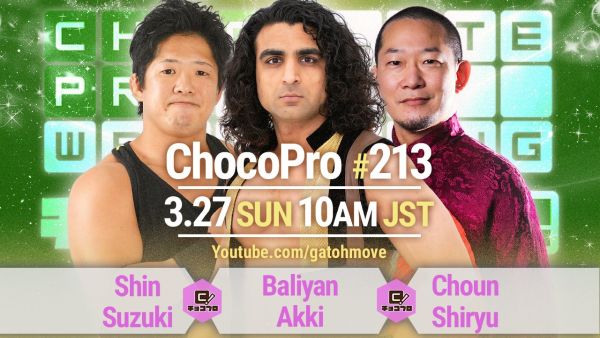 Opening ChocoPro #213 is a three-way encounter featuring an up-and-coming name, the reigning Super Asia Champion, and the former Super Asia Interim Champion. Shin Suzuki versus Baliyan Akki vs Chon Shiryu is a promising match on paper given the varied fighting styles of the men involved. Suzuki’s energetic approach has captured the hearts of ChocoPro viewers, as said approach made him feel right at home in Ichigaya Chocolate Square. As a kung fu specialist, Shiryu is known for not only his strikes but ability to make the most of the seemingly limited Ichigaya venue.

The main story heading into this match, however, is Akki. On the aforementioned 2nd-anniversary event, he will defend the Super Asia Championship against Emi Sakura. The founding member of Gatoh Move announced her return to Japan and did so with impact, immediately targeting Akki and the Super Asia title. Before this championship encounter, Akki will be looking to keep the momentum on his side by any means, even if it means overcoming two competitors that are at the top of their game. See whether the champion can overcome this challenge in the opening match.

For the first time in over a month, Ryo Mizunami returns to Ichigaya Chocolate Square. “Aniki” last appeared on Day 1 of ChocoPro #200, where she picked up a victory over fellow colorful powerhouse Yuna Mizumori. Since departing All Elite Wrestling late last year, Mizunami has been incredibly busy throughout Japan, appearing for promotions such as Sendai Girls and SEAdLINNNG. She’s become notable in Japan and worldwide for both her wrestling style and swagger, showcasing confidence that few can match. On ChocoPro #213, she teams up with Emi Sakura, creating what should be a winning combination.

It’s not as if a victory is guaranteed, however, as Mizunami and Sakura take on the tandem of Sayaka Obihiro and Hagane Shinnou, the latter of whom last appeared on ChocoPro in January. Ironically enough, this was also in a tag team match alongside Obihiro, the two falling to Best Bros. Shinnou’s presence has been missed by many, as his stoic approach is only matched by the deadly nature of his strikes. Sakura may have missed many elements of wrestling in Japan, but being on the receiving end of one of Shinnou’s kicks is unlikely to be on the list. See how this main event tag team match unfolds as we draw closer to ChocoPro’s 2nd anniversary.