After a month or so off, Mission Pro Wrestling returns following the events of MPW Crazy Train. Holidead was taken out by the Renegade Twins, so the title defense against La Rosa Negra did not happen back in January. Now, Holidead looks to defend her title against not one but two opponents. Names such as Jordan Blade, Janai Kai and Jody Threat are returning while Riley Shepard is debuting at MPW No Debes Jugar (You Shouldn’t Play). 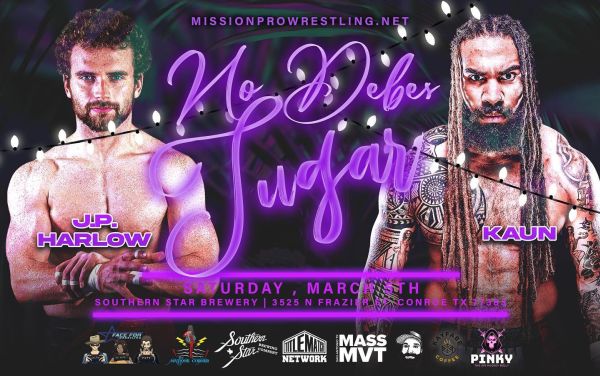 As Mission Pro continues to do the opposite of what most other wrestling promotions do (they have one men’s match while most other promotions only have one women’s match), JP Harlow might be up against his toughest opponent to date in Kaun. Harlow picked up a victory in the four-way match at Crazy Train and he will need that momentum if he wants to take out the mighty Kaun at MPW No Debes Jugar. 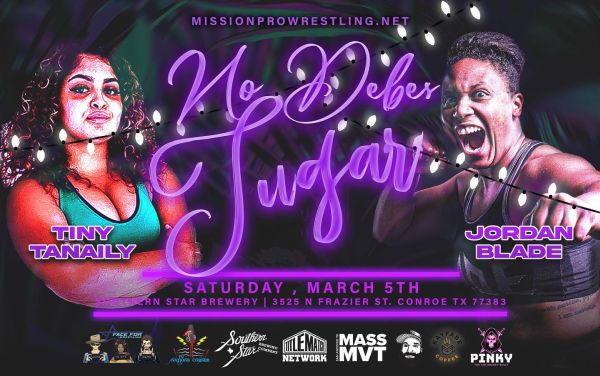 The only advantage that Tiny Tanaily has in being described as “tiny” is that it might make it more difficult for Jordan Blade to find her ankles. Regardless, Blade is the “Submission Sniper” for a reason. Once again, Blade comes to Texas to kick some ass and take some ankles. Tanaily just seems to, unfortunately, be the next victim. 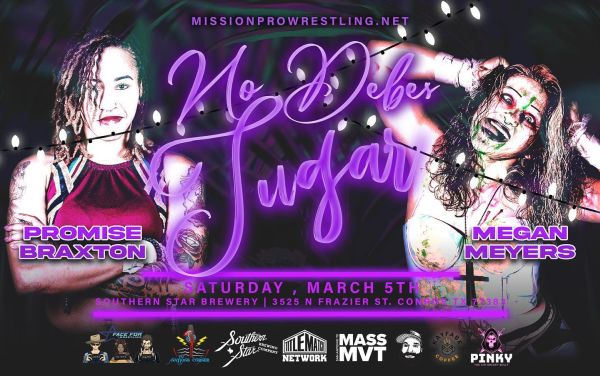 Though neither Promise Braxton nor Megan Meyers should be seen as one-dimensional, the fact that Braxton has spent considerable time in Texas and Meyers has spent ample time in Absolute Intense Wrestling makes this feel like a battle of territories. Between Reality of Wrestling and New Texas, Braxton has some big victories over names such as The Hyan, Vertvixen, and Mia Friday. Braxton, however, does have some high-profile losses over names such as Trish Adora, Rok-C, and Abadon.

Megan Meyers has had recent victories over names such as Katie Arquette, Adena Steele, and Joseline Navarro. One trait Promise Braxton and Meyers share in common is that they have both appeared in All Elite Wrestling and Meyers has even teamed up with Navarro against Ruby Soho and Thunder Rosa. This match feels very even and both of these wrestlers have something maybe not to prove to the fans but to prove to each other. 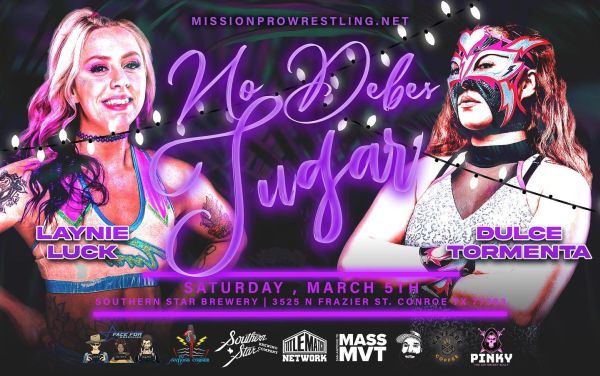 The last time Laynie Luck was seen in Mission Pro, she took a loss to Thunder Rosa. Luck also sometimes wears a mask to look like a unicorn. Dulce Tormenta wears a different type of mask- because she is a luchadora- and has also been on an absolute tear lately, with wins at Shoot To Thrill and Play Hard, Hustle Harder for Mission Pro. This feels like a time when Luck needs to come up with a victory, but the odds just seem so stacked against her and Tormenta just seems to be that much more on top of her game. 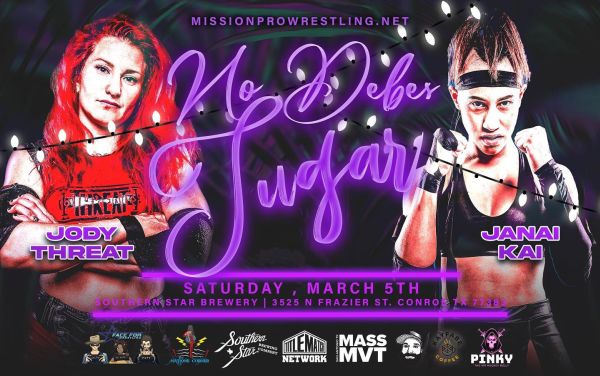 When it comes to wrestling being a test of toughness, no one is tougher than Jody Threat. A real-life daredevil, Threat will put her body on the line if it means inflicting punishment upon her opponent. At the same time, Janai Kai is more of a controlled chaos element with educated feet. This match feels like what might happen if Evil Knieval was to face Bruce Lee when they were both alive and they were at the top of their game in professional wrestling. This is going to be violent and fans should enjoy every second of it. 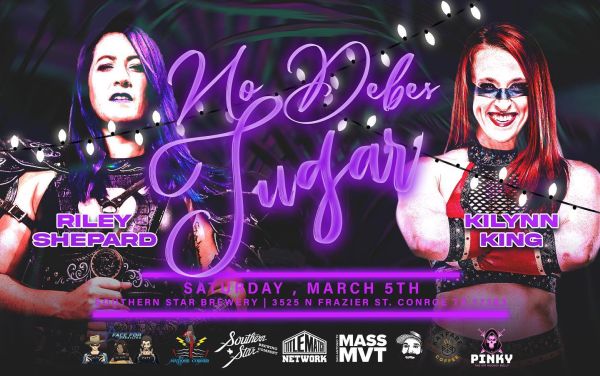 Riley Shepard has been making quite the name for herself, collecting gold through the Northeast and, for the first time, her quest finds her in Mission Pro Wrestling. KiLynn King is no stranger to MPW, with a win at Crazy Train over Killa Kate. Both of these wrestlers have been in seemingly the same territory; it’s just that now they are facing each other on the biggest of stages. Shepard is coming off of a big win this past Saturday at Blitzkrieg! Pro as part of a trios team with Logan Black and Kennedi Copeland. A dream match of sorts, this will be a huge win for Shepard but it will likely be one of those matches we look back at five years from now when it’s done again on a larger scale. 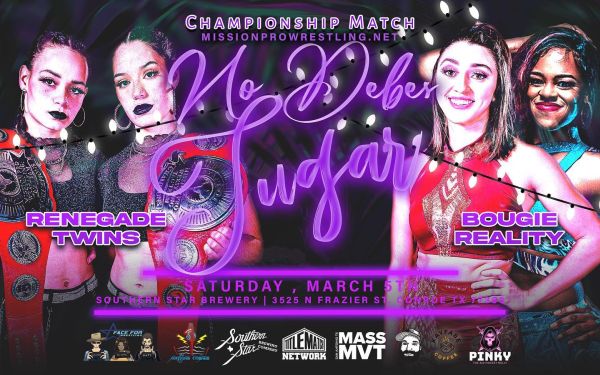 Back in October of 2021, the Renegade Twins were crowned MPW Tag Team Champions with a win over Bad And Boujee. This was, of course, the team of Katalina Perez and Lexi Gomez, while the team of Bougie Reality is comprised of Madi Wrenkowski and Rache Chanel. Does any of this really matter? The Renegade Twins are literally twins. It’s in their name! It’s going to take a very seasoned, very focused tag team to defeat them; is that team Bougie Reality?

This whole story goes back to MPW Don’t Fear The Reaper in October of 2021. Jazmin Allure defeated La Rosa Negra for the MPW Championship, but the celebration was short-lived as Holidead cashed in and won the title from Allure. Holidead would go on to defend the title successfully against Black Widow and Madi Wrenkowski, but both of the wrestlers who feel like they were wronged back in October- Negra and Allure- get to come together and face Holidead at the same time. Negra also won a Scramble Match at MPW Silver Bells and was supposed to have her title shot at Crazy Train, but Holidead was not medically cleared. This is it. This is the big one. If Holidead wins here, the past stays in the past and the MPW title can move forward.

Stay tuned to the Last Word on Pro Wrestling for more on this and other stories from around the world of wrestling, as they develop. You can always count on LWOPW to be on top of the major news in the wrestling world, as well as to provide you with analysis, previews, videos, interviews, and editorials on the wrestling world.  If you are unable to attend No Debes Jugar in person, it will be streaming live and later available on-demand on the Title Match Wrestling Network. You can also enjoy all of MPW’s back catalog of shows on their network.