ChocoPro #204 is a one-match show, but it promises to be an important one. On this episode, Gatoh Move Pro Wrestling fans will see the Asia Dream Tag Team Championship defended in one of the titleholders’ most challenging encounters yet. Can they continue their successful reign or will this be the day when their momentum comes to an end? To increase the possibility of a decisive winning team, this match will be given a 60-minute time limit. As always, the action will air live on the official Gatoh Move YouTube channel before being made available for viewing afterward. Here’s what to know. 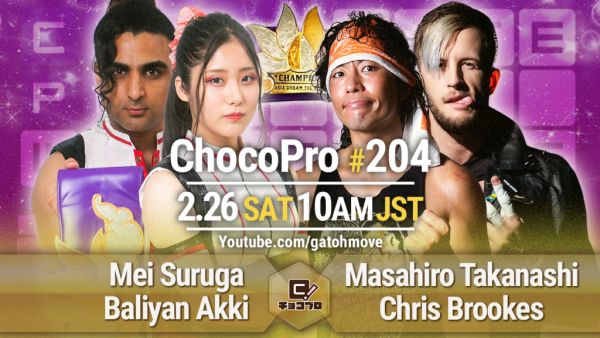 As avid viewers of ChocoPro will attest, Best Bros stand atop the Gatoh Move mountain. Mei Suruga and Baliyan Akki have been the reigning Asia Dream Tag Team Champions for over 420 days, having won the titles at the very end of 2020. Since then, they’ve successfully defended the straps against Melt Brain Dancing, TropiKawaild, Egg Tarts, and other duos ChocoPro viewers will be familiar with. More recently, Akki defeated Minoru Fujita to become the unified, undisputed Super Asia Champion. All eyes are on “Mei-chan” and “Akki 2 Belts” as they continue their reign. However, their latest title defense may very well be their toughest.

This isn’t a title match without history, however. Masahiro Takanashi has been instrumental in the growth of ChocoPro and Gatoh Move as a whole, doing everything from working shows to overseeing day-to-day operations. Chris Brookes is a more controversial figure in Ichigaya Chocolate Square, having established himself as a villain to many. Together, they are Calamari Drunken Kings and even challenged for the Asia Dream Tag Team Championship as a unit. Think back to ChocoPro #187 this past December, when CDK faced Best Bros for the titles. This match went the 30-minute time limit, and while Suruga and Akki walked away with the purple belts, their frustration over being unable to pick up a decisive victory was palpable.

Heading into ChocoPro #204, the case can be made for either team walking away the Asia Dream Tag Team Champions. If Best Bros win, they have the opportunity to continue their title reign into March and even beyond. As mentioned earlier, they have momentum on their side, so it wouldn’t be unfathomable for them to hold onto the tag team titles. On the flipside, CDK is the only unit Best Bros have yet to decisively defeat in title contention. Furthermore, if Takanashi and Brookes win, they will capture their first tag team titles as a duo. See who emerges victorious as the weekend kicks off.