Game Changer Wrestling continues its run in the Texas area with GCW If I Die First. Originally scheduled to take place in Irving Arena, the event in question will not emanate from Athletic Zone, located in Dallas. Even with this change in venue, this aims to be a promising show, featuring company stalwarts including Joey Janela, legendary stars such as Dr. Wagner Jr., and even a GCW Extreme Championship contest. Whether you plan on attending the show live or watching from home via FITE, here is what you should know about the action to come. 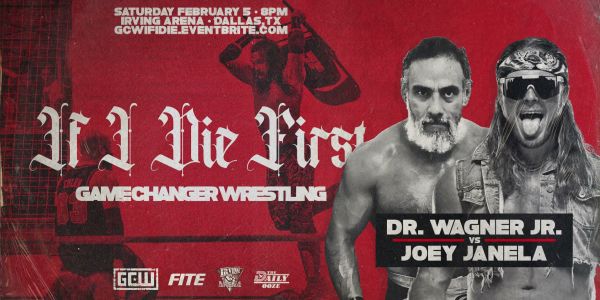 In one of the key matches of the night, Dr. Wagner Jr. will make his Game Changer Wrestling debut. Since the mid-to-late 1980s, Wagner has been one of the premier stars to come out of Mexico, not only due to his undeniable charisma but the body of work he’s crafted. From his legendary run in Consejo Mundial de Lucha Libre (CMLL) from 1992 to 2007 to his work in Lucha Libre AAA Worldwide, New Japan Pro-Wrestling, Lucha Underground, and elsewhere, it’s fair to say that this is one doctor whose credentials speak for themselves. Until now, the former 3x CMLL World Light Heavyweight and AAA Mega Champion has yet to step into a GCW ring. This Saturday, he will do so against a man synonymous with the promotion.

Last month, Joey Janela left Hammerstein Ballroom, for The WRLD on GCW, a defeated man. He faced off against Matt Cardona, who he went back and forth with on social media for weeks leading up to the show in question. Despite Janela’s best efforts, as well as countless run-ins and interruptions, he was unable to defeat the self-proclaimed “Deathmatch King.” Not one to stay down for long, “The Bad Boy” will step into GCW If I Die First against a lucha libre legend in Dr. Wagner Jr. Janela isn’t new to matches with veteran wrestlers, but this Saturday, he may find the seasoned doctor to be an extra challenge. 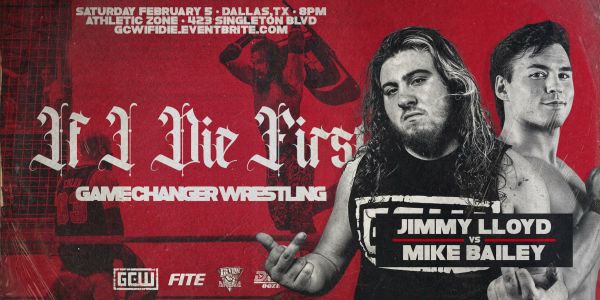 If there are any two wrestlers in GCW that aim to make a statement at If I Die First, it would be “The Different Boy” Jimmy Lloyd and “Speedball” Mike Bailey. At The WRLD on GCW, Lloyd took part in the opening Grab the Brass Ring Ladder Match. Given the utilization of ladders, hence the name, the hardcore fighting “Different Boy” seemed to be right at home in this element. Despite his best efforts, he was unable to unhook the brass ring in question. This has done little to impact his standing with GCW fans, however, as he’s among the most popular in the promotion. The fact that he willingly puts his body on the line, through hellfire and brimstone, is one of the main reasons for this.

Meanwhile, the Quebec-born Mike Bailey made his return to the United States wrestling scene following an extended leave of absence from the country. Last year, he wrestled primarily in his home country, working for organizations such as Capital City Championship Combat and Great North Wrestling, not to mention the United Kingdom for Revolution Pro Wrestling. Bailey made his GCW debut at last month’s Say You Will event, facing Tony Deppen in a losing albeit spirited effort. Bailey’s reputation on the independent scene is positive, but this alone won’t be enough to lead him to success in 2022. A victory over Lloyd at GCW If I Die First may be the ticket he needs. 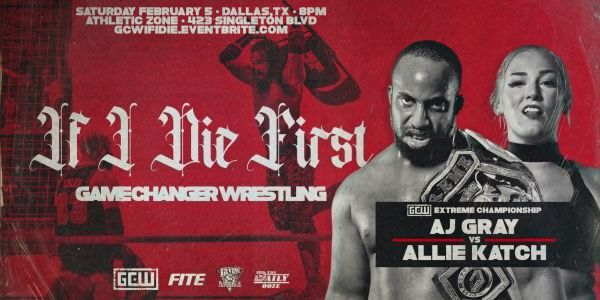 GCW If I Die First will also see the company’s Extreme Championship defended as titleholder AJ Gray goes one-on-one with challenger Allie Katch. Unlike Janela, Gray left Hammerstein Ballroom a winner, albeit with a scar or two to tell the story. He was a surprise entrant in the show’s opening bout, the Grab the Brass Ring Ladder Match. The winner of said contest would receive a future match that they would decide the time and place of. Gray overcame 6 other competitors to secure the brass ring and, more importantly, a match of this choice yet to be determined. Given that “Rich Homie Juice” is the current GCW Extreme Champion, him becoming a double titleholder is that much more of a possibility.

To do so, Gray will first have to overcome Allie Katch, who will be aiming to win her first championship in GCW. At The WRLD on GCW, Katch competed in what she considered a dream match against All Elite Wrestling’s own Ruby Soho. Though Katch came up on the losing end of the match in question, she earned the respect of her opponent all the same. It’s fair to say that Katch is one of the company’s most popular stars, having won the adulation of the promotion’s most passionate fans through her heart, determination, and just a pinch of violent offense. To overcome AJ Gray, and win the GCW Extreme Championship, it goes without saying that Allie Katch must take that same offense to a higher level.

Stay tuned to the Last Word on Pro Wrestling for more on this and other stories from around the world of wrestling, as they develop. You can always count on LWOPW to be on top of the major news in the wrestling world, as well as to provide you with analysis, previews, videos, interviews, and editorials on the wrestling world. GCW If I Die First is set to air Saturday at 8 PM CST on FITE. Tickets are also available via Eventbrite.