Following the kickoff show, The WRLD on GCW 2022 proper began with the Grab the Brass Ring Ladder Match. The competitors involved were Jordan Oliver, Jimmy Lloyd, G-Raver, PCO, Tony Deppen,GCW Ultraviolent Champion Alex Colon, and as a last-minute entry, GCW Extreme Champion AJ Gray. The winner of this bout would receive a match of their choice at any time. The 6 competitors involved gave this match their all in front of a sold-out Hammerstein Ballroom crowd in New York City. However, it was AJ Gray that emerged victorious, winning the Grab the Brass Ring Ladder Match in front of passionate GCW fans. 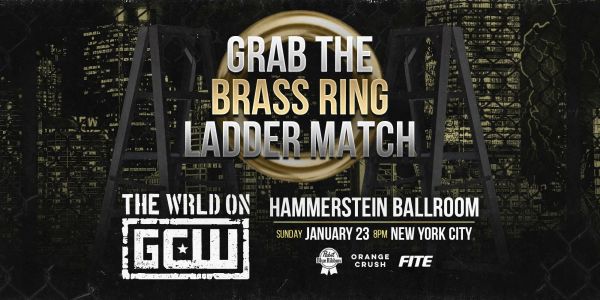 What to Know Following This Victory

AJ Gray has been seeing considerable success in GCW early into 2022. Earlier this month, at the company’s Say You Will event, Gray bested PCO for the GCW Extreme Championship, shattering “The French Frankenstein’s” reign that lasted over 1,220 days. It’s also worth noting that “Rich Homie Juice” was on a collision course to face current All Elite Wrestling star Eddie Kingston at The Hammerstein Ballroom, though a recent injury put Kingston on the shelf for a brief period.

As stated earlier, the winner of the Grab the Brass Ring Ladder Match is entitled to a match of their choosing at any time. The details aren’t more specific, though it can be assumed that the winner can challenge any of the current GCW titleholders. The champions of the promotion are as follows.

Stay tuned to the Last Word on Pro Wrestling for more on this and other stories from around the world of wrestling, as they develop. You can always count on LWOPW to be on top of the major news in the wrestling world, as well as to provide you with analysis, previews, videos, interviews, and editorials on the wrestling world. The WRLD on GCW 2022 can be seen on FITE.