For the first time since September 2021, Game Changer Wrestling returns to New York City. Making its debut at the historic Hammerstein Ballroom, the independent wrestling powerhouse will hold The WRLD on GCW 2022. This will be the company’s fourth event under the WRLD on GCW banner and to say that this year’s event looks promising would be an understatement. Included in the action to come this Sunday are 3 major title defenses, though this is far from the extent of the excitement. Here is what viewers in attendance and those at home should know before the event at hand. 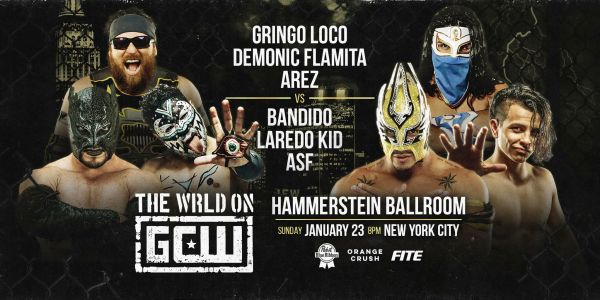 The WRLD on LUCHA

For those that are partial to high-flying, fast-paced action, Game Changer Wrestling will have you covered at The WRLD on GCW 2022. Set to take place will be a trios tag team match pitting Team Gringo (Gringo Loco, Demonic Flamita, and Arez) against Team Bandido (Bandido, Laredo Kid, and ASF). The six competitors involved have appeared in GCW in different ways, not only in singles but multi-man competition alike. Even if one isn’t familiar with the competitors here, understand that these different elements will come together to create a match that the rest of the card will have to work that much harder to top or even equal.

As mentioned earlier, on this show, the ROH World Champion will be in action. However, as one may notice on this card, he won’t be the only former Ring of Honor signee to wrestle at The WRLD on GCW. Keep in mind that Demonic Flamita and Bandido were both part of the company prior its ceasing of operations. Bandido was especially vital to the company, not only as one of its top stars but a former ROH World Champion in his own right. One can expect that the former ROH-contracted stars will shine in this match, though one shouldn’t discredit the other competitors involved, either. This is a contest that’s emblematic of the adage, “blink and you may miss it.” 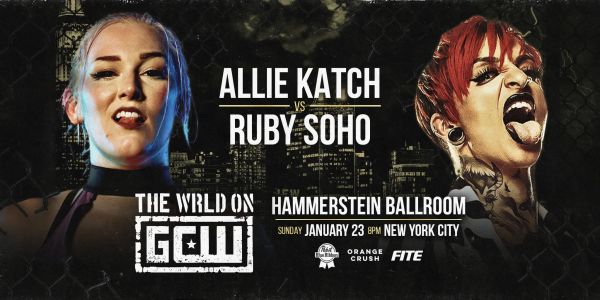 In what will be many first-time encounters at The WRLD on GCW 2022, Game Changer Wrestling stalwart Allie Katch goes one-on-one with All Elite Wrestling star Ruby Soho. To say that this has been a dream encounter for Katch would be an understatement. As she stated in this match’s hype video, she’s been chasing this encounter since she began running the ropes as a rookie. Through ups and downs, as the saying goes, “everything happens for a reason” and it would seem the universe gave Katch what she desired for so long. The Hammerstein Ballroom will host the first-ever encounter between the scrappy Texas native and “The Runaway.”

In late 2021, Ruby Soho dipped her toes back in the independent wrestling scene. This past December, she battled IWTV Independent Wrestling World Champion Alex Shelley at Beyond Wrestling’s Fete Forever and Josh Alexander at AAW Unstoppable later that month. These were highly anticipated encounters by independent wrestling fans and it goes without saying that her first-ever GCW match falls right in line. Recently, Soho came up short in the finals of the TBS Championship Tournament against eventual winner Jade Cargill, though “The Runaway” isn’t one to let a loss keep her down for long. Soho is coming to Hammerstein with two goals: to put on a classic and, more importantly, have her arm raised by the end of the night.

"If you step foot into The Hammerstein Ballroom… you're stepping in to MY WORLD…"#TheWrldOnGCWpic.twitter.com/QuqodchRt2

A Standoff at The WRLD on GCW

This Sunday, one of the more heated feuds in Game Changer Wrestling reaches its apex as EFFY takes on Jeff Jarrett. In fact, this particular feud began earlier this month at GCW’s Die 4 This event. EFFY took the ring to make an announcement when, all of a sudden, a hooded figure wielding a guitar made his way into the ring. Not long after, EFFY found himself wearing a guitar around his neck. The figure unmasked, the attacker revealing himself as Jarrett to a hostile crowd. “The EFFY Experience” saw this as Jarrett trying to use him to get “the rub,” or an attempt to regain relevance in professional wrestling. EFFY refused to dignify Jarrett any further, but “Double J” wasn’t done yet.

At GCW Say You Will, Kylie Rae took on Allie Katch, the latter being not only EFFY’s teammate in BUSSY but one of his closest friends to boot. Katch proceeded to cut an impassioned promo heading into her match with Ruby Soho, as mentioned earlier. However, much like with EFFY, Jarrett snuck into the ring and struck Katch over the head with a guitar. The response was so volatile that the 6x NWA world champion almost become physically involved with fans in attendance. Now, in an attempt to defend his friend and silence the invading WWE Hall of Famer, EFFY will take on Jeff Jarrett at The WRLD on GCW. Expect this encounter to be nothing short of vitriolic. 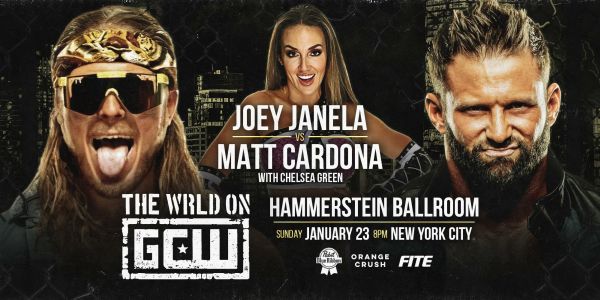 When discussing unbridled support from the Game Changer Wrestling faithful, there are few starker contrasts than “The Bad Boy” Joey Janela and the self-proclaimed “Deathmatch King,” Matt Cardona. While Janela has built a reputation as one of GCW’s most popular stars, putting his body on the line for the company he calls home, Cardona treats that very company with contempt. Gestures such as referring to the fans as “The GCW Universe” have done very little to endear him, as well as his real-life wife, Chelsea Green, to the company’s avid supporters. Matters between Janela and Cardona grew more hostile when images of “The Bad Boy” and Green, ala Ric Flair and Miss Elizabeth, were produced.

While the aforementioned pictures were viewed as tongue and cheek by most, Cardona didn’t seem to find them so humorous. At Die 4 This, Cardona faced the legendary Ricky Morton in a losing effort. Post-match, Cardona and Green seemed to show respect for Morton who is, as of this writing, in the middle of his farewell tour. In no time, however, Green struck Morton in the groin, giving Cardona the opportunity to pounce on the blonde-haired Rock ‘n’ Roll Express member. Enter Janela, who stormed the ring to not only come to the defense of his friend but chase “The Deathmatch King and Queen” to the entranceway. At The WRLD on GCW, tune into this match to see who has the full support of the GCW faithful. 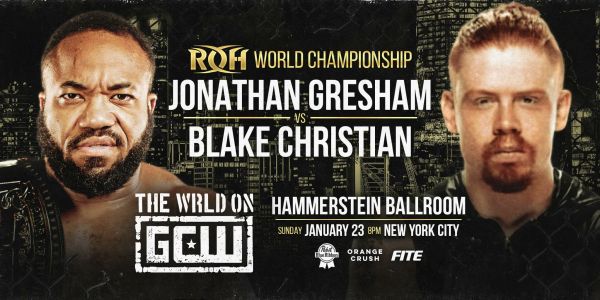 One of the major matches set to take place – as well as the very first officially announced – at The WRLD on GCW 2022 will be Jonathan Gresham defending the ROH World Championship against Blake Christian. Since claiming the vacant ROH world title this past December at Final Battle, Gresham has defended the championship with pride across the wrestling scene at large. From IMPACT Wrestling to GCW itself, “The Foundation” has proven time and time again why he is a world champion to keep an eye on. ROH may be resting, but the same cannot be said for the face of the company in question. This Sunday, Gresham returns to GCW to defend his title once more, this time in a first-ever encounter.

“Air Blake” has been far from absent in the world of GCW. Earlier this month, at Die 4 This, Blake Christian teamed up with Alex Zayne in an unsuccessful effort against GCW Tag Team Champions The Briscoe Brothers. However, the month prior, Christian and Zayne were successful against the duo of Ninja Mack and Dante Leon. Most recently, at GCW Say You Will, Christian came out victorious in his match against Bandido. The match prior, Gresham successfully defended the ROH world title against 2 Cold Scorpio. Following Gresham’s title defense, Christian stared down his opponent for this Sunday’s event. Will we see a new titleholder? Regardless, this promises to be a must-see bout.

Plus:
Janela vs Cardona
Allie vs Ruby
Gresham vs Blake
Team Bandido vs Team Gringo

Mox Returns at The WRLD on GCW

It’s been quite a few months, but at The WRLD on GCW, the company’s world champion makes his return. Since November, Jon Moxley was been away from the wrestling world to participate in an inpatient alcohol treatment program. This was a choice that the wrestling world commended, hoping that Moxley not only get the help he needed but that he take his time to get better. Since Moxley stepped away from the wrestling world, fans have been waiting with bated breath, not only in regard to his home promotion of AEW but the independent scene as well. After all, Moxley is still the GCW World Champion, and his return match would have to be a major one. Fortunately, GCW has just the right opponent for him.

Anyone that has been following the indie wrestling scene for the past decade-plus will attest to the history Moxley has with “The 187,” Homicide. From Dragon Gate USA to Combat Zone Wrestling, Homicide and Moxley waged war on multiple platforms. If they weren’t fighting for championship gold, it was pride that they put on the line. At GCW Die 4 This, which took place earlier this month, Homicide emerged victorious in the DO or DIE Rumble. With this victory, he earned a GCW world title match, which will take place this Sunday. In the historic Hammerstein Ballroom, will Moxley make his long-awaited return a win, or will Homicide become a 2x GCW World Champion?

Stay tuned to the Last Word on Pro Wrestling for more on this and other stories from around the world of wrestling, as they develop. You can always count on LWOPW to be on top of the major news in the wrestling world, as well as to provide you with analysis, previews, videos, interviews, and editorials on the wrestling world. The WRLD on GCW 2022 is set to air Sunday at 8 PM EST on FITE.