GLEAT presents G PROWRESTLING Ver.15, live from Shinjuku FACE. This show kicks off the first-round action in the G-REX Championship tournament. Not only that, but freelance group PROMINENCE comes to GLEAT for the first time. There is card stacked with plenty of action set. Here is the rundown of what to expect. 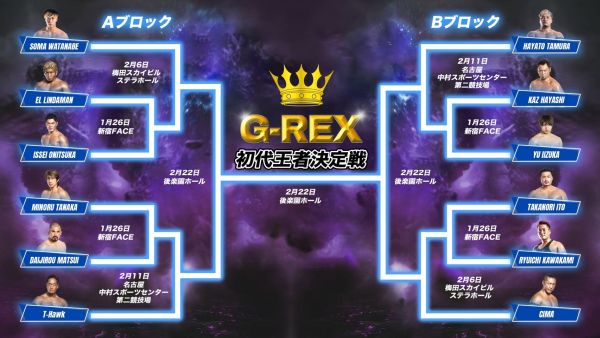 This match is an interesting one, as these two men are the head figures of the LIDET UWF branch. While this is a standard pro wrestling match, it’s to be expected these two will lean into the UWF style, making it the perfect first-round match for the tournament. Take into account that this tournament will be without any UWF matches and that LIDET UWF is an important part of the company. After all, the LIDET UWF branch is what likely attracted people to view GLEAT.

This match will embody that branch so that the stipulation is there in spirit. Not only that, but it’s a big chance for Daijirou Matsui to show what he can do in a G PRO ring. He hasn’t had many regular wrestling bouts, so of course, Minoru Tanaka has the slight edge here. He is who we expect to advance at G PROWRESTLING Ver.15 and move on to face T-Hawk in the second round.

One of the more interesting first-round matchups, Kaz Hayashi vs. Yu IIzuka is one of two matches that could go either way. IIzuka has made big waves during the first full year of GLEAT, capturing the hearts of fans all over due to his Swiss Army knife-like ability to transform his shoot style, crafting it as his own. This style can easily translate to both the LIDET UWF and G PRO rings. However, he doesn’t have it easy in this first-round match, battling one of the founding fathers in Hayashi.

Kaz Hayashi is coming off a big loss to MUSASHI at TDC Hall, however it’s a new year. Everything is a clean slate going forward, and for the tournament to crown the very first champion for a company he helped put together? Best believe Kaz is entering this match with a purpose. This is definitely going to be the sleeper match of the first round, but we think in the end Yu IIzuka will go on to meet Hayato Tamura in the second round.

This is an all STRONGHEARTS affair as Issei Onitsuka and El Lindaman do battle. What makes this match so interesting and engaging is not occurring in GLEAT. Lindaman has been in the news recently with IWGP Junior Heavyweight Champion El Desperado, wanting to face him for the belt. He has been adamant in his quest to get a member of STRONGHEARTS. However, a name he did not mention was Onitsuka. Maybe this is the slap in the face Ontisuka needs to take it to the next level.

El Lindaman has been respectful, telling everyone he is focused on the G-REX for now. However, every other member of STRONGHEARTS has gotten global recognition, except Ontisuka. This is a chance for Issei to prove his worth to STRONGHEARTS, to GLEAT, and the entire world. Unfortunately, that fighting spirit might not be enough at G PROWRESTLING Ver.15, as we think El Lindaman meets Soma Watanabe in the second round.

The main event of the show is the biggest first-round match of the whole tournament. This is a match where one of the favorites to win the whole tournament will be knocked out immediately and possibly busting everyone’s brackets. Takanori Ito, in the early stages of the company and even now, has been an ace project for GLEAT. He very much seems like he is going to be a centerpiece, if not THE centerpiece, for GLEAT at some point, but he hasn’t put everything together thus far.

Ryuichi Kawakami, on the other hand, has been the big man on campus, so to speak. Coming over from Big Japan Pro Wrestling, he quickly became the man antagonist. Kawakami wanted to make a statement, and up until TDC Hall, he had never been pinned. Even then, he is undefeated in singles action, but Ito has all the tools to overcome Kawakami. We just don’t see it happening, as CIMA versus Kawakami has been building since Kawakami came to GLEAT. This is the expected second-round match.

Stay tuned to the Last Word on Pro Wrestling for more on this and other stories from around the world of wrestling, as they develop. You can always count on LWOPW to be on top of the major news in the wrestling world, as well as to provide you with analysis, previews, videos, interviews, and editorials on the wrestling world. You can watch GLEAT on their YouTube channel and NicoNico.