The action in All Elite Wrestling has reached its boiling point and it all combusts this Wednesday night on a special Beach Break edition of AEW Dynamite. Only a month has passed in the year 2022, and tensions are already high and they keep getting higher. If this preview of AEW Dynamite: Beach Break doesn’t heat fans’ desire for some AEW action, we don’t know what will. So, grab a cold drink and let AEW’s brightest stars treat you to a night of #AllElite action.

In this edition of AEW Dynamite, an undisputed TNT Champion will be crowned as “The American Nightmare” takes on “The Spanish God” in a Ladder Match. The Inner Circle battles “Red Death” and 2Point0 in trios action. Plus, it’s Lights Out for Adam Cole and “Freshly Squeezed” Orange Cassidy.

There is a lot more in store on what’s promising to be one heck of a thrill ride episode of Dynamite. So, strap yourselves in for Beach Break as we run it down! 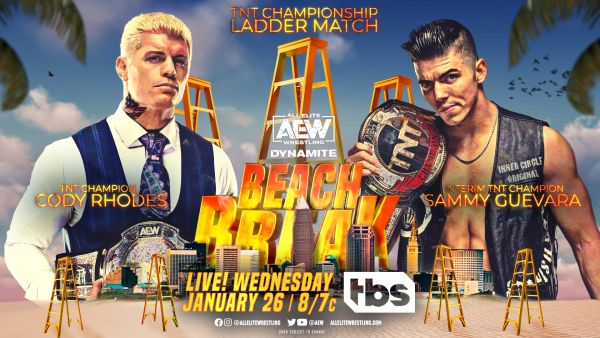 Stairway to the Gold

“The American Nightmare” and TNT Champion Cody Rhodes made his return, after a 2-week absence, last week on AEW Dynamite. Cody spoke of many things, from how he felt about the fans to the game-changing “Pipe Bomb” of CM Punk.

Rhodes had a lot to say. But, above all else, he wanted to settle the issue concerning the TNT Championship. Cody said that there are no “secondary” titles in AEW. A title is only secondary when there are two champions, on the fact that Sammy Guevara is the reigning Interim TNT Champion due to Cody’s short hiatus.

Cody stated he wants to settle this once and for all at Beach Break in a Ladder Match. “The Prince of Pro Wrestling” is willing to risk it all to be crowned the undisputed champion. With that being said, Sammy Guevara has enough fire in himself to match Cody’s willingness to do whatever it takes. It’s Rhodes versus Guevara – winner takes all at AEW Dynamite: Beach Break! Don’t miss it live on TBS!

No Rules, No Mercy

Adam Cole had a bittersweet night last week on Dynamite. He and his significant other, AEW Women’s World Champion Dr. Britt Baker, D.M.D. managed to beat Orange Cassidy and Kris Statlander in mixed tag team action. However, Baker had to pay the price to win that matchup.

As Orange Cassidy went for the Orange Punch, Cole avoided contact at the expense of Baker, who fell violently through a table. Angered by this incident, Cole hit Cassidy with a low blow followed up by nailing “Freshly Squeezed” with The Boom.

After the match, Cole was livid backstage. He stated that enough is enough and Cassidy had to answer for the incident with Baker and these past months of being a thorn in the side of Adam Cole. Thus, Cole proposed a Lights Out match to settle things once and for all.

We have never seen Adam Cole quite like this and Orange Cassidy better brings his “A-Game” because this isn’t going to be just another wrestling contest. On the contrary, it’s going to be a downright bloody battle. Will Orange Cassidy live to fight another day or will Adam Cole end “Freshly Squeezed’s” budding career?