Pro Wrestling NOAH is back in Sendai post-Wrestle Kingdom Night 3 in Yokohama Arena. NOAH is set to put on yet another big event: BUMPER CROP 2022 in SENDAI. The card took a bit of a hit with numerous members of the roster taken off due to positive PCR tests and close contact protocols. However, the show is still headlined by the GHC Heavyweight and Heavyweight Tag Team Championships being defended. Here is a run down of the updated card. 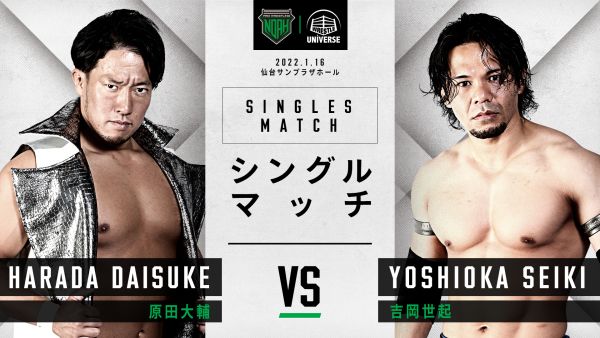 With the changes made to the BUMPER CROP card, Seiki Yoshioka may have won big as a rematch of the GHC Junior Heavyweight Championship match from last year’s BACK TO BUDOKAN show is taking place. Although it’s a non-title match, Daisuke Harada is once again the GHC Junior Heavyweight Champion. He recently took the championship from HAYATA, and as of right now, Harada doesn’t have a challenger for the gold. This could be Seiki Yoshioka’s chance to make the claim for a title match.

While he and Yuya Susumu seem to also be targeting Hajime Ohara and Atsushi Kotoge’s GHC Junior Heavyweight Tag Team Championship shot, a win over Harada could put Yoshioka on the path of pursuing the double champion life that HAYATA was just living. As for Harada, it’s a chance to stand his ground as junior ace and turn back a potential challenger in the process. 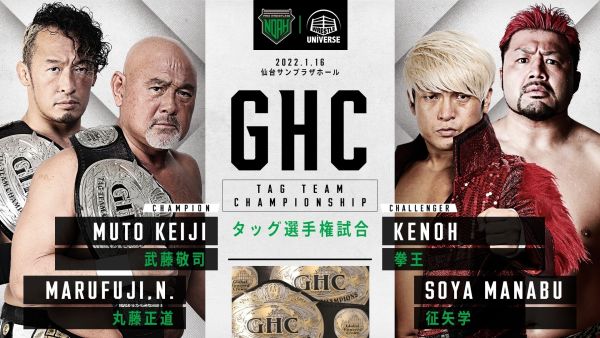 A very unique tag match with a lot of history, Kenoh and Manabu Soya look to bring the last piece of heavyweight gold to KONGO. Manabu Soya and Naomichi Marufuji fought in a multi-man tag match last week. This prompted Soya to challenge Marufuji and Muto on behalf of him and Kenoh. Interestingly enough, Manabu Soya was a longtime roster member of Keiji Muto’s WRESTLE-1 promotion before making his way to NOAH. If there’s anyone who can derail Sonya’s power advantage, it’s Muto.

Keiji Muto has also said this year, as he turns 60, he is going to be aiming for the ‘red belt’ and of course, he means the GHC National Championship. Muto could be targeting a victory over Kenoh to put him right in contention for the championship. Kenoh, on the other hand, likely relishes the chance to take a belt from Naomichi Marufuji. This tag team championship match is going to be a clash of styles and beliefs. The question remains, which team will be stronger and come out on top?

Katsuhiko Nakajima is on quite the roll as GHC Heavyweight Champion. However, the biggest threat to his championship has emerged: his former tag team partner, Masa Kitamiya. Last year, around this time, The Aggression, as they were called, captured the GHC Heavyweight Tag Team Championship. However, they were soon on a path of destruction, resulting in the dissolving of their team. Kitamiya cited true hate that dated all the way back to their time in the Diamond Ring. After their split, Kitamiya had Nakajima’s number.

Kitamiya defeated Nakajima in their hair vs hair steel cage match, eventually winning their GHC Heavyweight Tag Team Championship decision match. However, since then, Nakajima has been ascending. Meanwhile, Kitamiya floated with no purpose. Yet, Kitamiya came back to haunt Nakajima by pinning him in a multi-man tag match. Afterward, Kitamiya declared himself the next challenger for the GHC Heavyweight Championship. Will Nakajima maintain the roll he has been on, or will Masa Kitamiya forever be his kryptonite?

Stay tuned to the Last Word on Pro Wrestling for more on this and other stories from around the world of wrestling, as they develop. You can always count on LWOPW to be on top of the major news in the wrestling world, as well as to provide you with analysis, previews, videos, interviews, and editorials on the wrestling world. You can watch Pro Wrestling NOAH as well as DDT, TJPW, and more on Wrestle Universe and ABEMA.