Presented by Ice Ribbon, Winter Story 2022 will take place at Korakuen Hall with two titles on the line. Here’s what to expect from the show at hand. 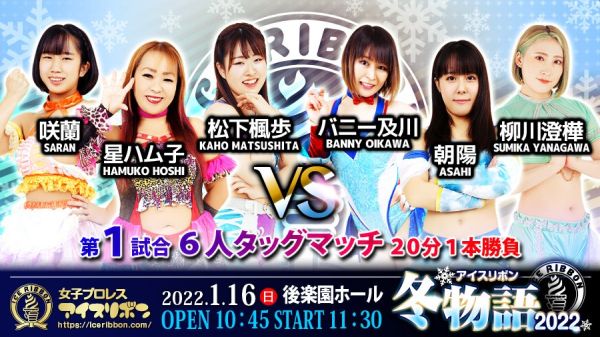 Kicking off Winter Story 2022 will be a handful of rookies being given their time to shine. This match was originally supposed to feature Yappy but she, unfortunately, tested positive for Covid-19; she will be replaced by Sumika Yanagawa from JUST TAP OUT. It also features one of the new International Ribbon Tag Team Champions, Hamuko Hoshi, so in terms of which team will be picking up the victory, it seems like Saran and Kaho Matsushita will be winners alongside the champion. 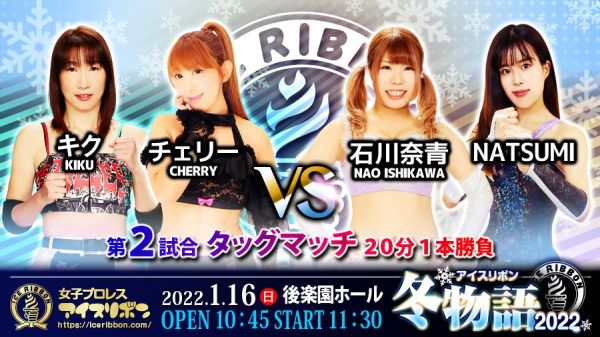 Kiku and Cherry vs Nao Ishikawa and NATSUMI

Another one of the newer names in Ice Ribbon, Kiku, will be teaming alongside veteran Cherry. They teamed before and worked well together. With so many new faces in the match, Cherry is the perfect veteran to have in the match; she will make sure they’re working at a safe pace. Barring Cherry, don’t expect much veteran know-how from this bout. 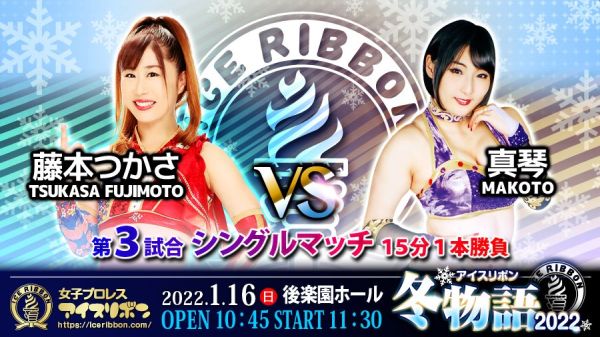 Making a return to Ice Ribbon is Makoto, currently holding the SEAdLINNNG Beyond the Sea tag team titles with ASUKA. Makoto has been quietly proving how spectacular she is in the ring and going against Tsukasa Fujimoto will prove that. With how good both of these women have been in the past year, this could easily be a front runner for the match of the night. 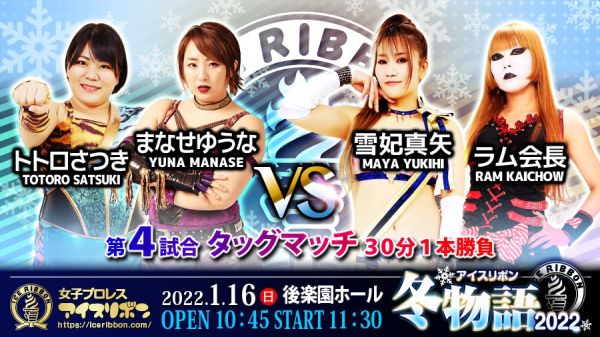 After losing the International Ribbon tag team titles, Maya Yukihi will once again team with Rebel X Enemy teammate Ram Kaicho. Yukihi has been busy in DDT Pro-Wrestling since going freelance at the end of December so she can reach her goals of going abroad, but it doesn’t mean she’ll miss out on some interesting matchups at her old home promotion. Yuna Manase will a rare appearance in Ice Ribbon; the head of Ganbare Joshi will more than prove why she’s so underrated and this tag team match is perfect. It’s hard to tell who will win, but it will be a great watch. 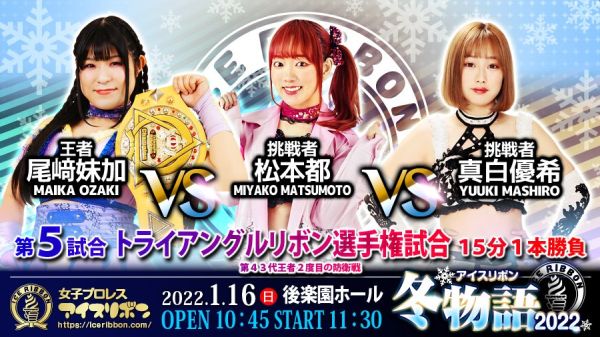 For the second time in her short career, Yuuki Mashiro will be competing for a title in Ice Ribbon. Although she’s not beaten Maika Ozaki in a singles match, she has beaten Miyako Matsumoto in quite a bizarre contest. Ozaki has been quite a strong champion; despite only defending the title once, she has picked up several wins in the various promotions she’s been appearing at. This match should be chaotic in the best way, with Ozaki carrying on as Triangle Ribbon Champion.

Only 15 days after winning her first title, International Ribbon tag team titleholder Ibuki Hoshi will be challenging for the top title against Tsukushi Haruka this time. Hoshi has previously taken on Haruka and it shot her name up the ranks within Ice Ribbon. These encoutners showed how much heart Hoshi had, going toe to toe in a chop battle with the current ICExInfinity Champion. Haruka successfully defended the title against Suzu Suzuki since winning it in November. Although Hoshi isn’t an easy win for the champion, it will be a match that proves that these two young women will be around in the company for a long time. Haruka will more than likely be leaving Korakuen Hall with her championship around her waist.