Following the events of Episode #193, Gatoh Move Pro Wrestling is set to move forward with ChocoPro #194. In addition to the Asia Dream Tag Team Champions in action in the main event, viewers will see the return of PURE-J star AKARI. It’s also fair to assume that, as we head closer to Episode #195, the picture regarding the Super Asia Interim Championship will continue to develop. All of this action, and more, will take place on Episode #194. Here is what viewers should expect prior to the show’s airing on the Gatoh Move YouTube channel.

Sayaka and Masahiro Takanashi vs. Chie Koishikawa and AKARI

As mentioned earlier, on ChocoPro #194, AKARI makes her return to Ichigaya Chocolate Square. For those that are unaware, this South American star first appeared on Episode #146 this past August. On this show, she teamed with Sawasdee Kamen in a losing effort against Best Bros. Though she’s only been wrestling for a few years, AKARI has seen considerable success, particularly in Japan. She is the current Princess of Pro Wrestling Champion in PURE-J, having won the title in February 2021 and successfully defending it multiple times. Episode #194 marks her second ChocoPro appearance and it goes without saying that she’ll aim to make it a successful one.

Teaming with AKARI will be the always exuberant Chie Koishikawa, who has yet to pick up a victory in 2022. On the previous episode of ChocoPro, “Chiezo” teamed with Kaori Yoneyama in a competitive main event against Best Bros. The year is still young, however, and there is still time for Koishikawa to aim toward the ambitions set upon her by mentor Emi Sakura. Together, Koishikawa and AKARI face off against Sayaka and Masahiro Takanashi, the latter of whom is on a collision course with Super Asia Interim Champion Chon Shiryu. Given how important a victory here would be for Takanashi, expect him to give this match everything he has. 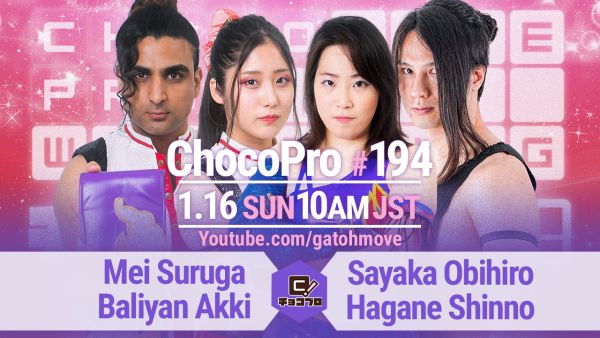 The momentum of Best Bros continues heading into ChocoPro #194. Given their most recent victory, as mentioned earlier, the confidence of Mei Suruga and Baliyan Akki couldn’t be higher. It seems that ever since “Mei-chan” returned to Japan, following a brief excursion to America, Best Bros have been at the height of their game. In fact, one can make the argument that there are few, if any, duos that could realistically take the Asia Dream tag team titles away from them. In non-title competition, on Episode #194, Suruga and Akki take on the veteran tandem of Sayaka Obihiro and Hagane Shinnou.

Though he’s known for teaming with Chie Koishikawa as the duo known as Egg Tarts, Shinnou isn’t opposed to working with others. In fact, he teamed with Obihiro in different multi-person tag team scenarios, so it isn’t as if this is their first time working together. However, in regard to ChocoPro, this is their first time as a team in a standard tag scenario. Their fighting styles serve as unique contrasts, with Shinnou being more strike-based and “Obi-san” adopting a more technical approach. In theory, however, this could prove to be a solid blend, making for a challenge fitting of the Asia Dream Tag Team Champions. See this main event unfold on ChocoPro #194.