ChocoPro #192 wraps up another weekend of wrestling under the Gatoh Move Pro Wrestling umbrella. As was the case with Episode #191, this upcoming show is a two-match card, each match featuring Gatoh Move titleholders. It will also see the return of a Girl’s Prowrestling Unit! member that was positively received by fans of the show. If you’re planning on closing out your weekend with more wrestling, look no further. Here’s what to know about the action set to take place on the official Gatoh Move YouTube channel. 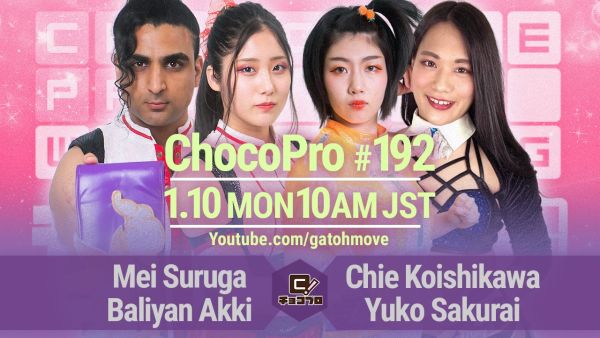 On the previous episode of ChocoPro, Chie Koishikawa took on Masahiro Takanashi in singles competition. “Chiezo” put forth a valiant effort against her elder, but ultimately, it was the latter that came away with the submission victory. Takanashi worked on Koishikawa’s leg during the match, and by the end, she seemed to be favoring it quite a bit. One has to wonder, heading into ChocoPro #192, how well her knee will hold up. On this episode, she teams with the returning Yuko Sakurai of the Girl’s Prowrestling Unit! brand. This will make Sakurai’s fourth appearance on ChocoPro, and given that she’s walking into Ichigaya Chocolate Square with a 1-2 record, a victory will be highly sought after.

Said victory won’t be easy to come by, however, as they’ll be squaring off with the Asia Dream Tag Team Champions. Mei Suruga and Baliyan Akki, collectively known as Best Bros, are coming off a major victory from the episode prior. Best Bros overcame Yuna Mizumori and Sayaka Obihiro in the main event. Following their victory, Akki noted their 2022 record; with 2 victories so far this year, the Asia Dream tag team titleholders are off to a tremendous start. However, another year also means a renewed focus on championship gold. Needless to say, Best Bros will be a target, though a third victory here would serve them well from a momentum standpoint. 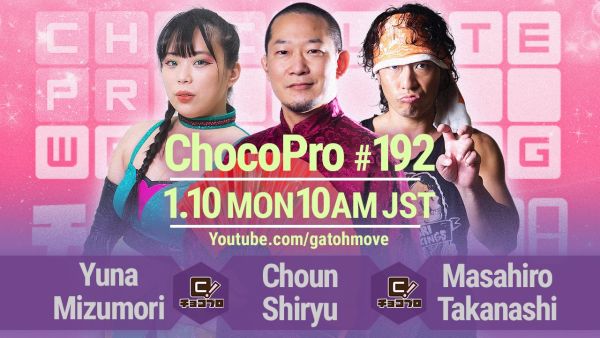 The main event of ChocoPro #192 sees the Super Asia Interim Champion in action as Chon Shiryu takes on Yuna Mizumori and Masahiro Takanashi in a three-way match. Since being declared the interim titleholder in place of Minoru Fujita, as he stepped away due to a positive COVID-19 diagnosis, Shiryu has been nothing short of dominant within Ichigaya Chocolate Square. He successfully defended his title twice, once against “Yunamon” and, more recently, once against Antonio Honda. Who will be the next individual to step up to Shiryu? Will fans eventually see Fujita return and crown an undisputed Super Asia Champion during ChocoPro Season 11?

The answer to this question will have to wait as Shiryu battles Mizumori and Gatoh Move’s On-Site Director, Takanashi, in a match where every competitor fights for themself. As mentioned earlier, Mizumori is heading into the main event with a loss from the previous episode. Meanwhile, Takanashi has a win under his belt. Whether these circumstances are indicative of the ChocoPro #192 main event’s result remains to be seen. Nonetheless, the focus will be on the Super Asia Championship scene, not only in regard to Shiryu and Fujita but anyone else looking to capture the blue belt in the future. This is going to be one main event not to miss.