On the previous episode of ChocoPro, Gatoh Move Pro Wrestling fans saw the injection of Girl’s Prowrestling Unit!, an off-shoot of Actwres girl’Z, in the standard programming. Gatoh Move is set to return to YouTube with ChocoPro #191, which features two matches. One of these bouts will see the Asia Dream Tag Team Champions, who continue their path of dominance, in non-title competition. If your weekend looks open, this will be a show to tune in for. Without any further delay, here’s what to know. 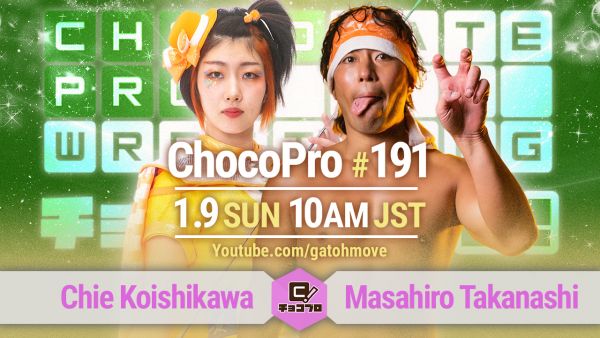 On Episode #188, Emi Sakura dialed into ChocoPro for the show’s New Year’s special. She did this to present the 2021 Sakura Awards, honoring the competitors that have gone above and beyond for the show in different ways. One such individual recognized was the always exuberant Chie Koishikawa. The honor that “Chiezo” received was the Expectation Award; Sakura recognized the hard work that her energetic protege put forth throughout 2021. As a result, Sakura had high expectations for Koishikawa in 2022. An emotional Koishikawa accepted the reward, declaring that she will do her best. She has a chance to do so on ChocoPro #191 as she battles Masahiro Takanashi.

Recognized as the On-Site Director of Gatoh Move, Takanashi’s efforts to make the show what it is today can’t be overlooked. One can call her Sakura’s right-hand man, especially in her absence as she continues to wrestle in America for All Elite Wrestling. On Episode #189, Takanashi teamed up with Baliyan Akki and Hagane Shinnou in a winning effort over Koishikawa, Tokiko Kirihara, and Sayaka Obihiro. ChocoPro #191 sees tw0 sixths of this equation face off in singles competition, and as mentioned earlier, this could be a big match for Koishikawa. A victory would not only be a major feather in her cap, as she would have overcome a veteran. Moreover, it may serve as momentum for 2022. 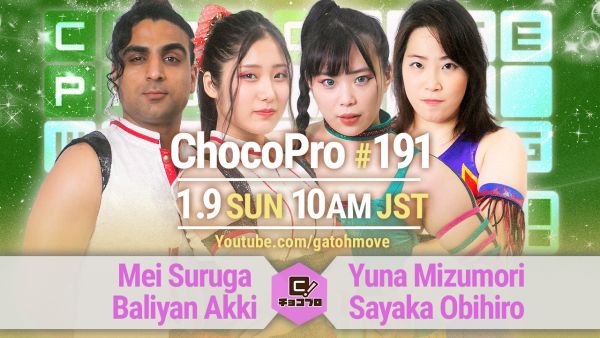 In the main event, the Asia Dream Tag Team Champions, Best Bros, battle the duo of Yuna Mizumori and Sayaka Obihiro. As of late, “Yunamon’s” story can be described as a case of “easy come, easy go.” On Episode #187, Mizumori met DDT Ironman Heavymetalweight Champion Toru Owashi in the finals of the show’s janken tournament. Mizumori won said final match, but in doing so, she surprisingly captured the title as well. This victory would be short-lived, however; by the end of the show, Owashi rolled up Mizumori from behind to recapture his championship, bolting out of Ichigaya Chocolate Square shortly thereafter. Not one to be deterred for long, Mizumori will be in action on ChocoPro #191, teaming with Sayaka Obihiro against Gatoh Move’s tag team titleholders.

The dominance of Best Bros, on ChocoPro, can’t be ignored. Mei Suruga and Baliyan Akki recently passed 372 full days as champions, which is a tremendous feat, to say the least. It’s easy to see why they hold this distinction as well, given their chemistry from bell to bell and sheer will to win. They’ve defeated any team that set out to challenge them for the Asia Dream Tag Team Championship; this begs the question, who can stop the reign of Best Bros? As Season 11 rolls on, Suruga and Akki prepare to take on the formidable pair of Mizumori and Obihiro, who are teaming for the first time in the confines of ChocoPro. This will be a tag team encounter not to miss.