On ChocoPro #190, Girl’s Prowrestling Unit! comes to Gatoh Move Pro Wrestling. For the uninitiated, GPU Color’s is a new brand that formed under the larger umbrella of joshi puroresu company Actwres girl’Z. Originally, the company’s expansive roster was broken down into two brands: Color’s and Beginnings. When AWG made the recent decision to leave the professional wrestling world, many of its competitors decided to stay in the business. This led to the creation of GPU Color’s, which includes certain freelance Japanese wrestlers that followers of the scene may be familiar with.

ChocoPro #190 will see a few of those very wrestlers in action as they work with the core ChocoPro competitors. Altogether, this show features 3 matches that will be airing live, for free, on the official Gatoh Move YouTube channel. As has been the case with shows prior, these will be available to view on-demand at any point. Whether you fancy yourself a fan of Gatoh Move, AWG, or both, here is what you should know. 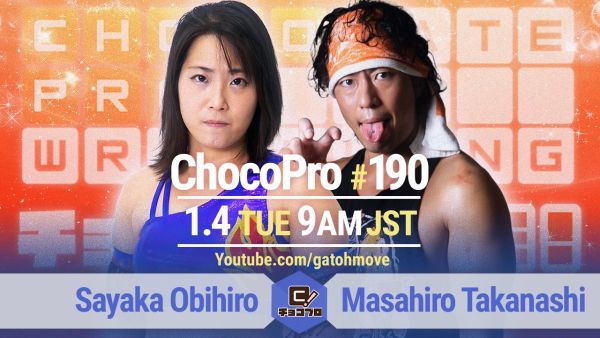 One of the matches scheduled for this show pits the two “Kappa Kozo Hunters” against one another. Sayaka Obihiro and Masahiro Takanashi have had their fair share of issues with the masked yokai in ChocoPro, but on Episode #190, their focus will be entirely on one another. This will be nothing short of a battle against veterans, as both have been involved in professional wrestling for years. While “Obi-san” got her start in early 2010, the beer-loving Takanashi has been at work since 2003. Furthermore, they’ve teamed up on a few occasions on ChocoPro programming, though these matches resulted in them being on the losing end. ChocoPro #190 will see them face off, one on one, for the first time on the show. Given that the previous episode saw Takanashi’s team defeat Obihiro’s in a 6-person contest, the latter will be hungrier for victory. 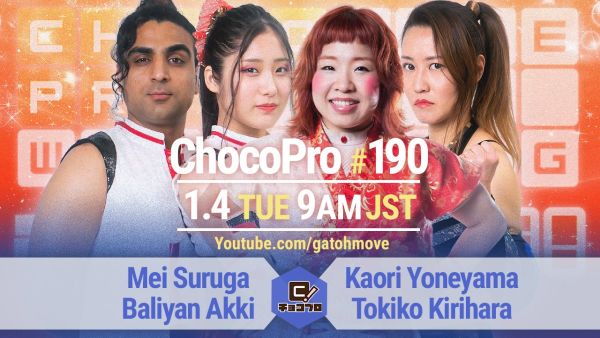 In a non-title contest, Asia Dream Tag Team Champions Best Bros take on the duo of Kaori Yoneyama and Tokiko Kirihara. Mei Suruga and Baliyan Akki have been looking to pick up where they left off before “Mei-chan” departed for America late last year. They began to do so with a victory over Masahiro Takanashi and Yuna Mizumori on ChocoPro #185, stumbled somewhat with a 30-minute draw against Calamari Drunken Kings, but eventually picked things up again by defeating Chie Koishikawa and Sayaka Obihiro on a recent episode. The challenges continue to rack up for Best Bros as they take on Yoneyama and Kirihara, which can be described as a blend of veteran wiles and hard-hitting offense, respectively. The last time they teamed up was back on Episode #160, where they fell to Yuna Mizumori and AWG’s own Ayano Irie. Can they make things right with a massive victory over Best Bros? 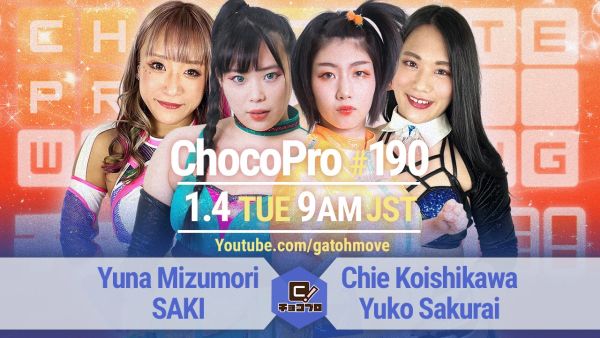 The major story heading into ChocoPro #190 is the involvement of AWG’s GPU Color’s representatives. For those that are interested in following the aforementioned brand, it’s worth noting that its first event, entitled YES, MY WAY, will take place on February 12. Two of the competitors set for that very event will be competing on this episode of ChocoPro, too. AWG Champion SAKI teams up with Yuna Mizumori, reuniting TropiKawaild, to take on the duo of “Too Much Energy” Chie Koishikawa and “The Venus of Color’s,” Yuko Sakurai. Simply put, if you’re looking for a match that brings elements of ChocoPro and AWG together, this is going to be the contest for you.

SAKI will be leading the pack of GPU Color’s, supported by Sakurai, Rina Amikura, and several others. This should go without saying, given that SAKI is the top champion of AWG and one of the company’s most experienced wrestlers. Not only has she been considered the promotion’s “Ace,” but she’s been incredibly successful in Gatoh Move, whether it was winning multiple Asia Dream tag team titles or emerging victorious alongside “Yunamon” in last year’s One of a Kind Tag League. One can regard the ChocoPro #190 main event as a teaser for the first GPU Color’s event next month, so keep an eye on this one.