San Francisco’s West Coast Pro Wrestling (WCPro) has made 2021 their year and has quickly become one of the West Coast’s most impressive indie promotions. Combining West veterans with loads of international and national stars, West Coast Pro returns on Friday night with yet another monstrous card worth checking out. Friday’s event, called Iceland, will air live on IndependentWrestling.tv (IWTV) at 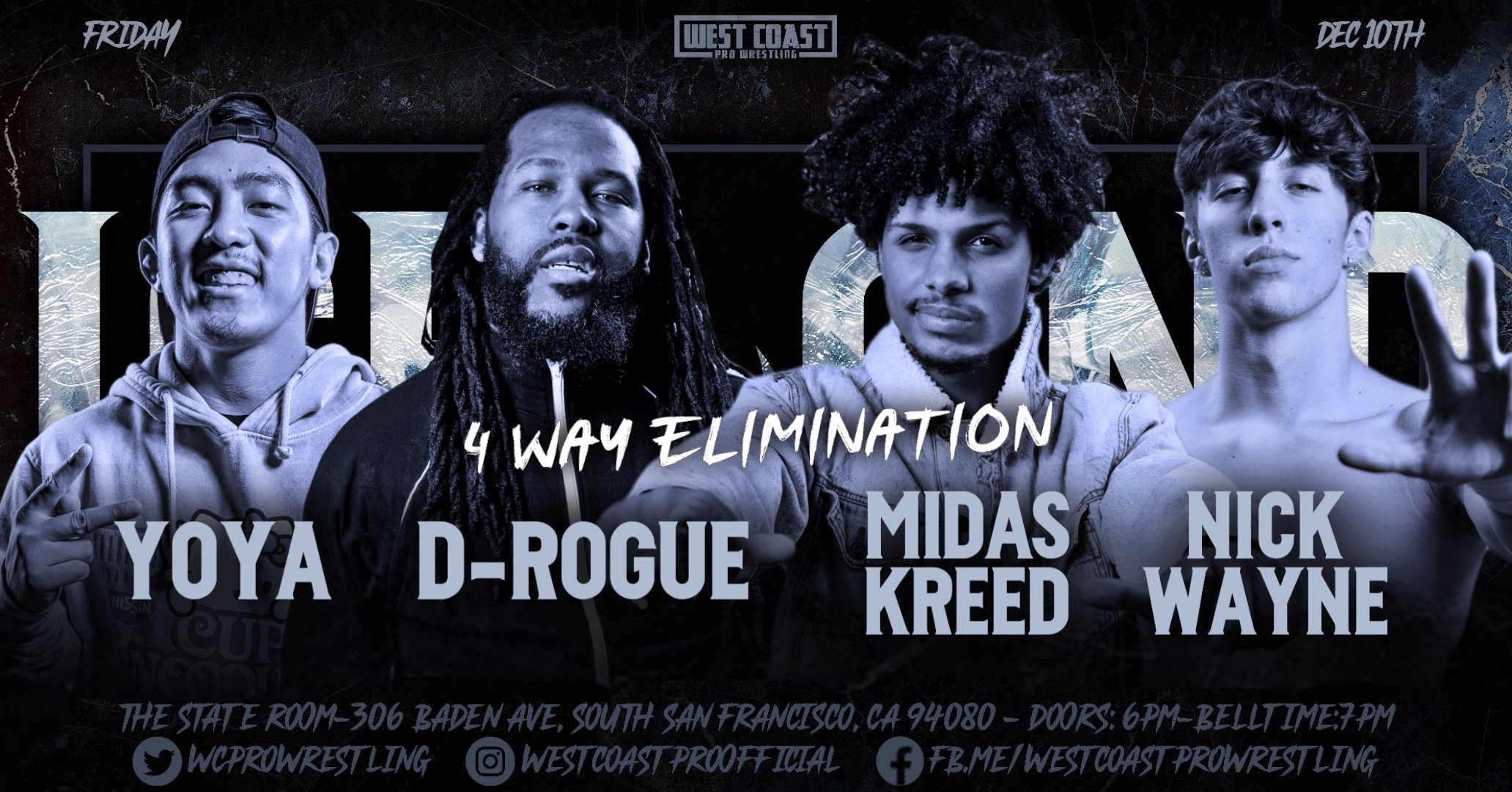 A fatal 4-way elimination match featuring four of the hungriest young stars in the game. Yoya has been an impressive fighter in the U.S. the past year, with strong showings in the likes of Game Changer Wrestling (GCW), Camp Leapfrog, Unsanctioned Pro, Jersey Championship Wrestling (JCW), and No Peace Underground, with a “never say die” attitude that has made him a fan favorite quickly in his young career. Likewise, D-Rogue has been on an impressive trajectory on the West Coast with Hoodslam, East Bay Pro Wrestling (EBPW), and GCW as well. Midas Kreed is another young stud from the EBPW crew, where he’s previously teamed in White Gold (with Chris Blaze) and he’s the current Supreme Pro Extreme Champion. Rounding out this impressive foursome is Nick Wayne, arguably one of the hottest young stars in the U.S. today. Expect nothing but a thriller. 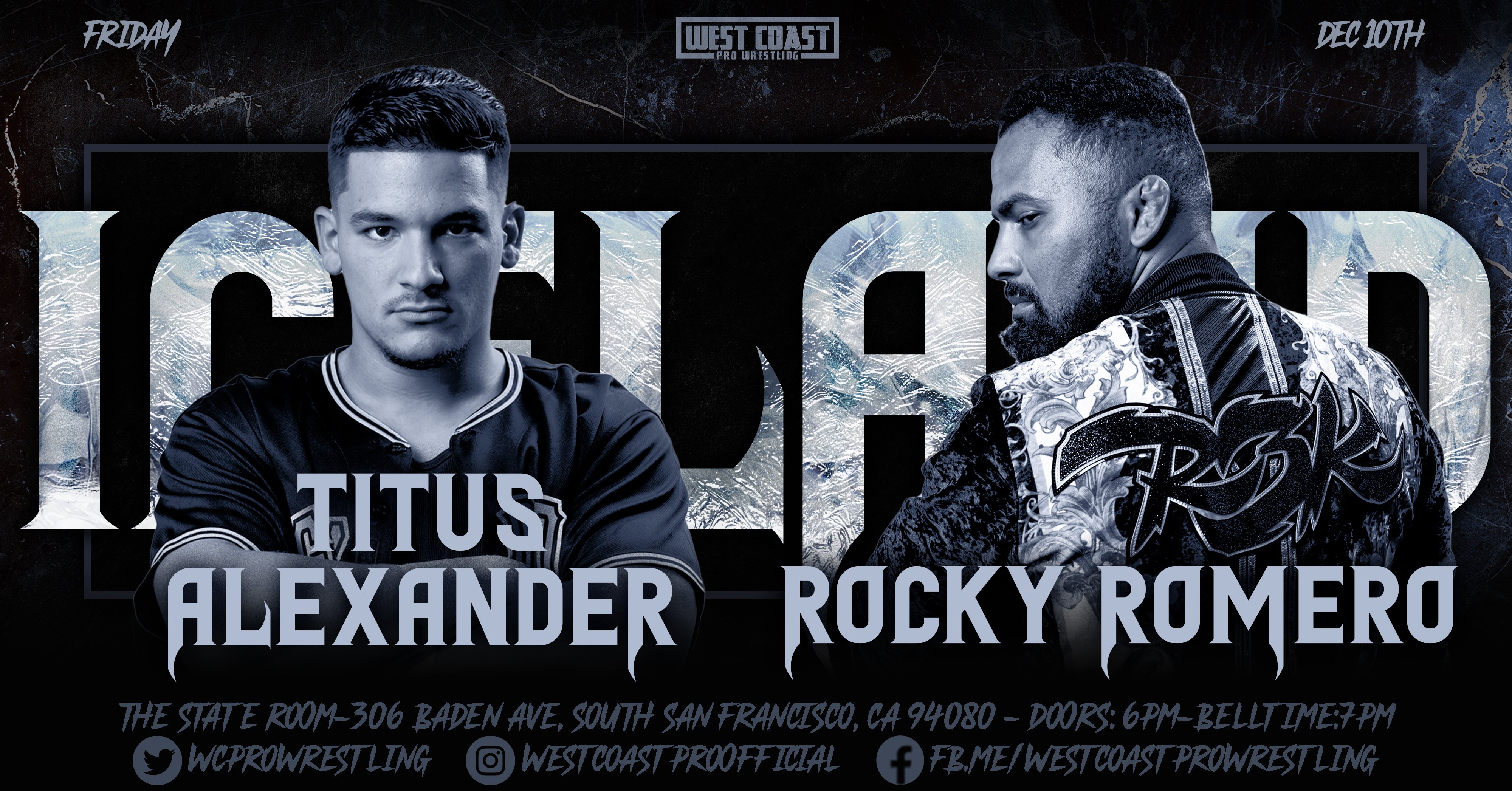 Titus Alexander, who has been making his rounds on the West Coast and Pacific Northwest loop with DEFY, Without A Cause (WAC), and DOA, is making a case on the West Coast and on Friday night he goes one on one with New Japan star Rocky Romero. One of the most underrated competitors of the past 20 years, Romero is a former IWGP Junior Heavyweight Champion and 3x CMLL World Super Lightweight Champion, who has been one of the greatest tag team specialists of the past decade – he’s an 8x IWGP Junior Heavyweight Tag Team Champion and 3x Ring of Honor World Tag Team Champion. This will be a huge test for Alexander, but the result will be a great showcase of professional wrestling for the fans. 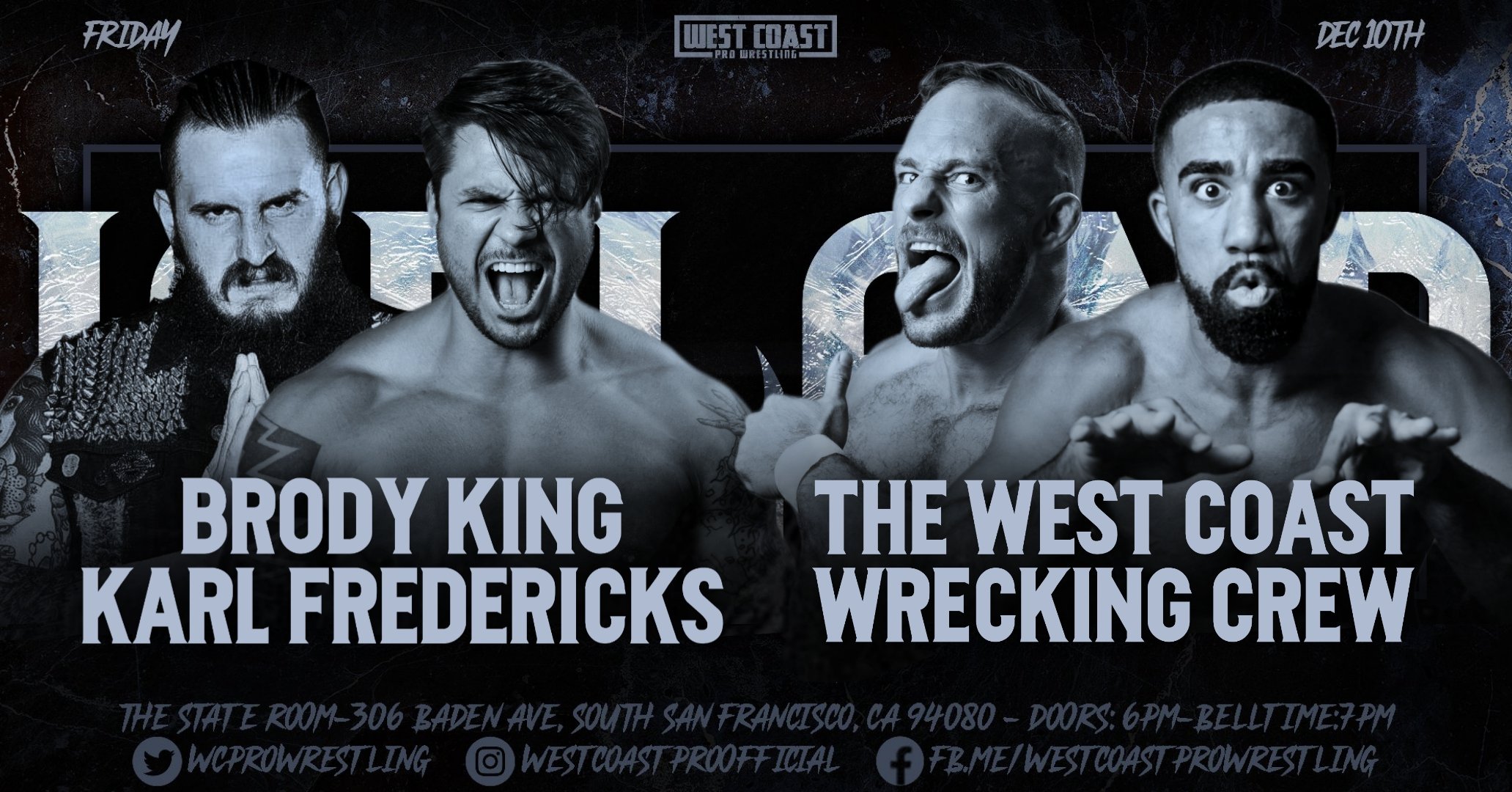 A huge tag team match-up that sees four men who are also regulars with NJPW’s U.S. division and compete for NJPW STRONG. Brody King teams up with Karl Fredericks to take on one of the West Coast’s most dominant teams of the past few years in The West Coast Wrecking Crew (formerly One Percent). There’s no love lost between these West Coast New Japan stars and this will be another great fight. 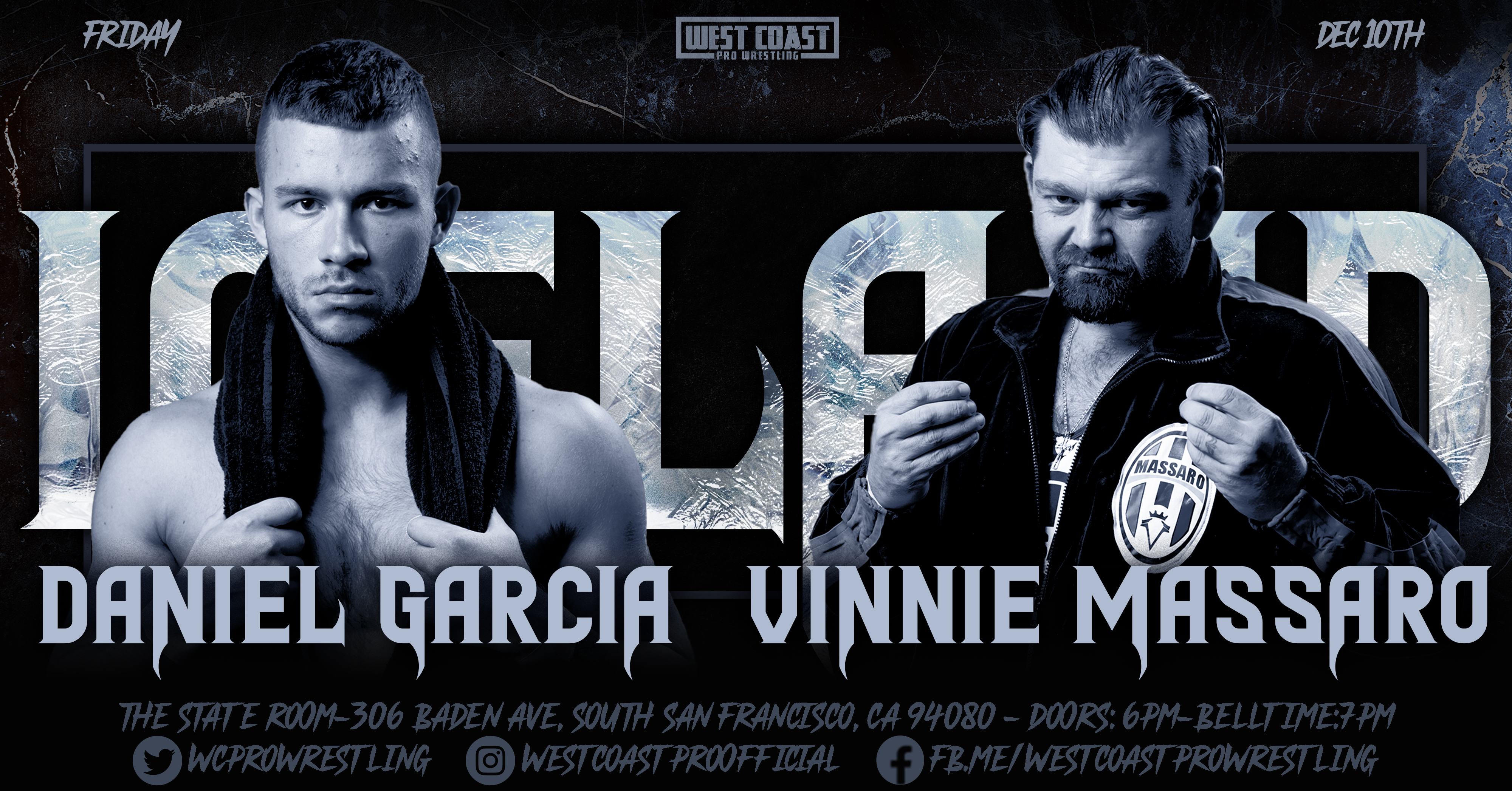 A West Coast veteran of nearly 25-years, Vinnie Massaro began in the late 90s with All Pro Wrestling (APW). Best known to national audiences from his time on Lucha Underground, as well as his run as Ultimo Panda that included a stint in All Japan Pro-Wrestling (AJPW) in 2018 (and an AEW Dark appearance last Fall), the tough grappler faces off against one of AEW’s breakout stars of 2021 in “Red Death” Daniel Garcia. With his plate load getting bigger in AEW as the months unfold, Garcia’s regular schedule on the indies may be slowing down, but on Friday night, Vinnie will be looking to show that this old grizzled vet still has some thunder in his pop. 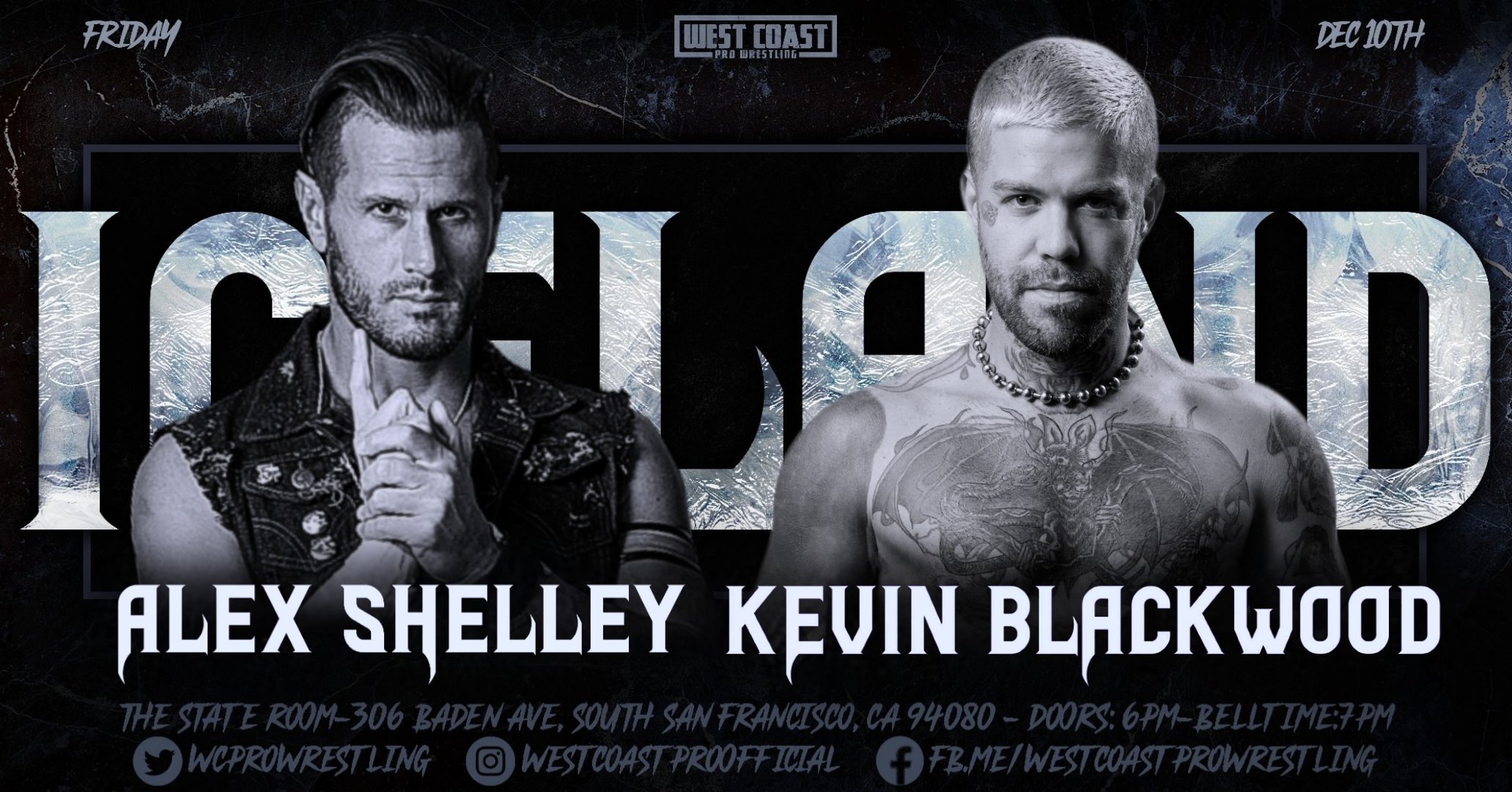 IWTV Independent Wrestling World Champion Alex Shelley continues a brilliant 2021 year in the U.S. indies with a return to the West Coast on Friday night, in what could be a preview of a potential match-up at the returning Pro Wrestling Guerrilla (PWG) Battle of Los Angeles this January. Shelley – who was announced as the 2nd entrant for the upcoming BOLA – will be facing off against Kevin Blackwood on Friday night, just days after Blackwood himself was announced as the 3rd official entrant in the prestigious tournament. Shelley has the experience in droves, but Blackwood has been on a tear the past year to prove he belongs in more conversations, and with BOLA around the corner for both men, expect Blackwood to pull out all stops as he faces Shelley. 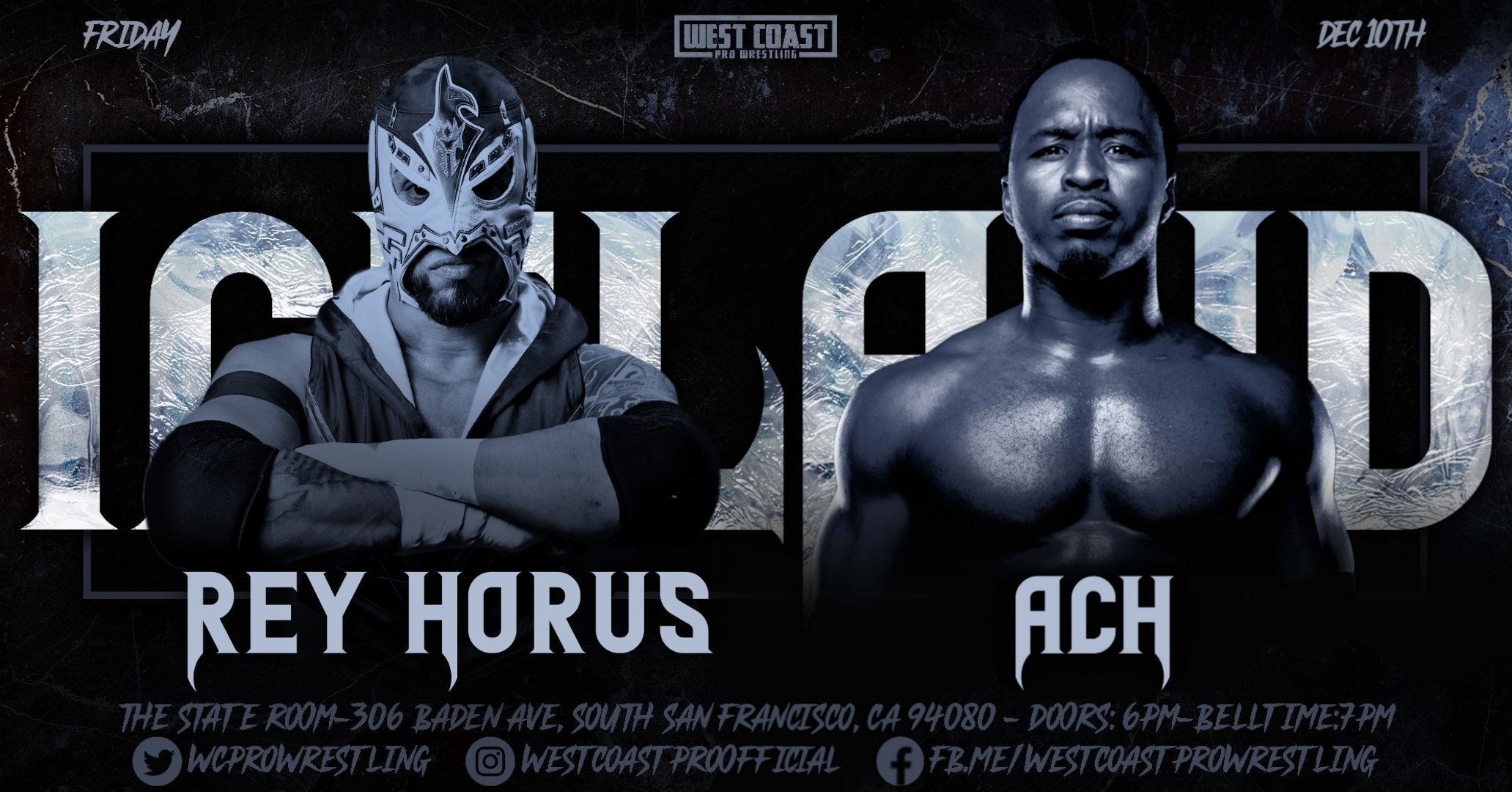 Originally slated to feature ROH World Champion Bandido against ACH, recent news that Bandido tested positive for Covid halted those plans. But quick to replace, West Coast Pro announced that Bandido’s MexiSquad hombre Rey Horus has stepped up to face ACH in what is sure to still be a top-flight match-up. Rey Horus is coming off a loss against Karl Fredericks last time out for West Coast Pro and will be looking to regain momentum by ruining ACH’s West Coast Pro debut on Friday night. 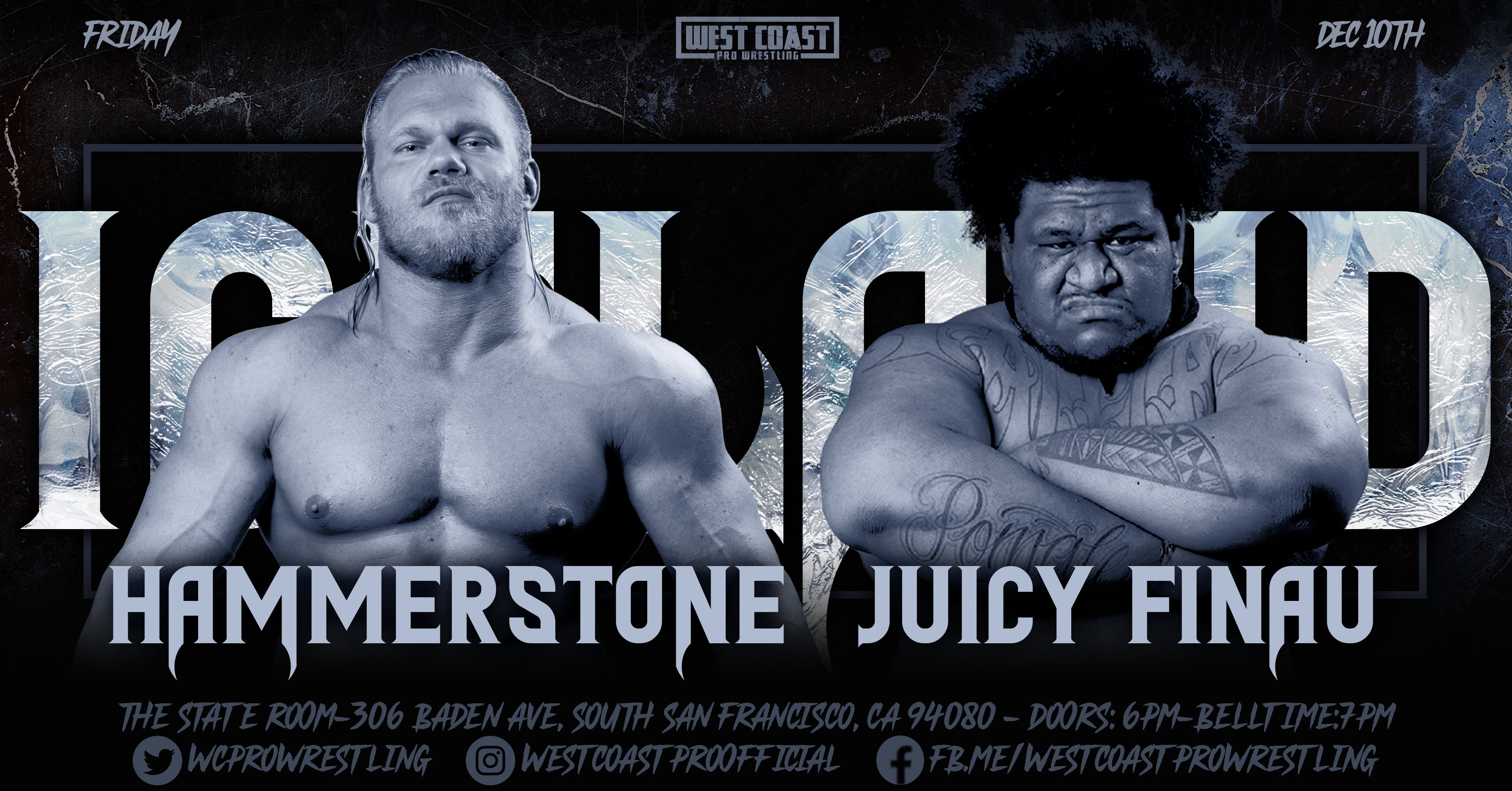 Two big men collide, as one of the most decorated men in the U.S. indies collides with one of its biggest hosses. Hammerstone is the reigning Major League Wrestling (MLW) World Champion, as well as the reigning Future Stars of Wrestling (FSW) Heavyweight Champion, PCW ULTRA Heavyweight Champion, Global Syndicate Wrestling (GSW) Champion, and one half of the AAW Tag Team Champions, and losing is just not in his DNA right now. He’s facing off against one of 2020’s breakout West Coast stars in the big Tongan Juicy Finau, who had a breakout year last year with GCW as well as many other West Coast promotions. The ring may not be able to contain the hard-hitting action of these two on Friday night. 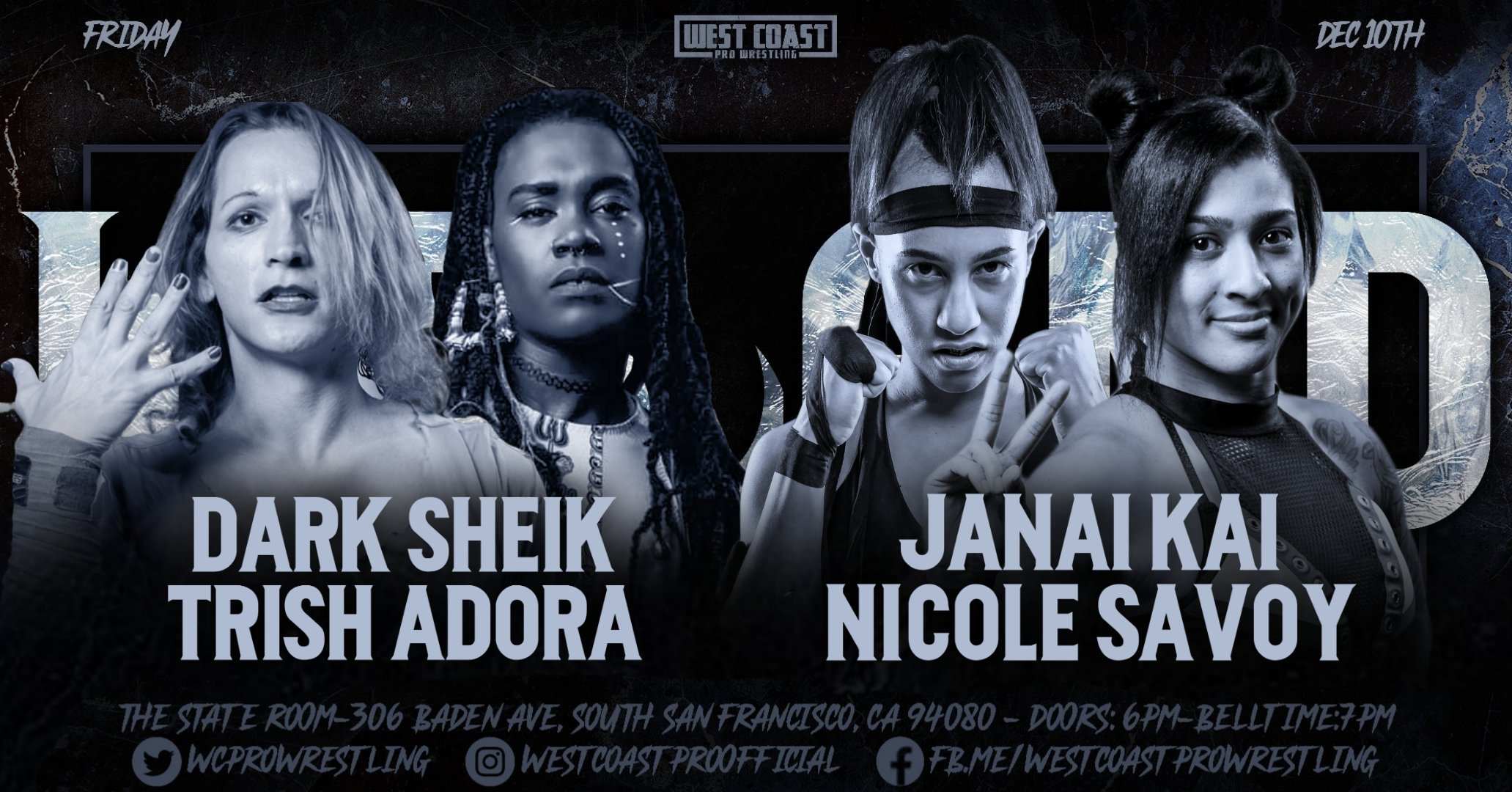 An absolute banger of a tag team match-up, this has all the tools to steal the show. West Coast icon Dark Sheik has had a career renaissance the past two years, finally exploding onto a national platform through appearances for GCW. She couldn’t have found a more capable tag team partner in the Pan-Afrikan World Diaspora Wrestling World Champion Trish Adora, who has emerged as one of the top grapplers of any gender in the past two years, including impressive stints with ROH, Beyond Wrestling, and more. They face a more than capable tandem across the ring though, led by former SHIMMER Champion Nicole Savoy, who had partnered with Janai Kai, one of the top young stars in the game. Four women who rarely have a bad match, this is going to be one for the ages. 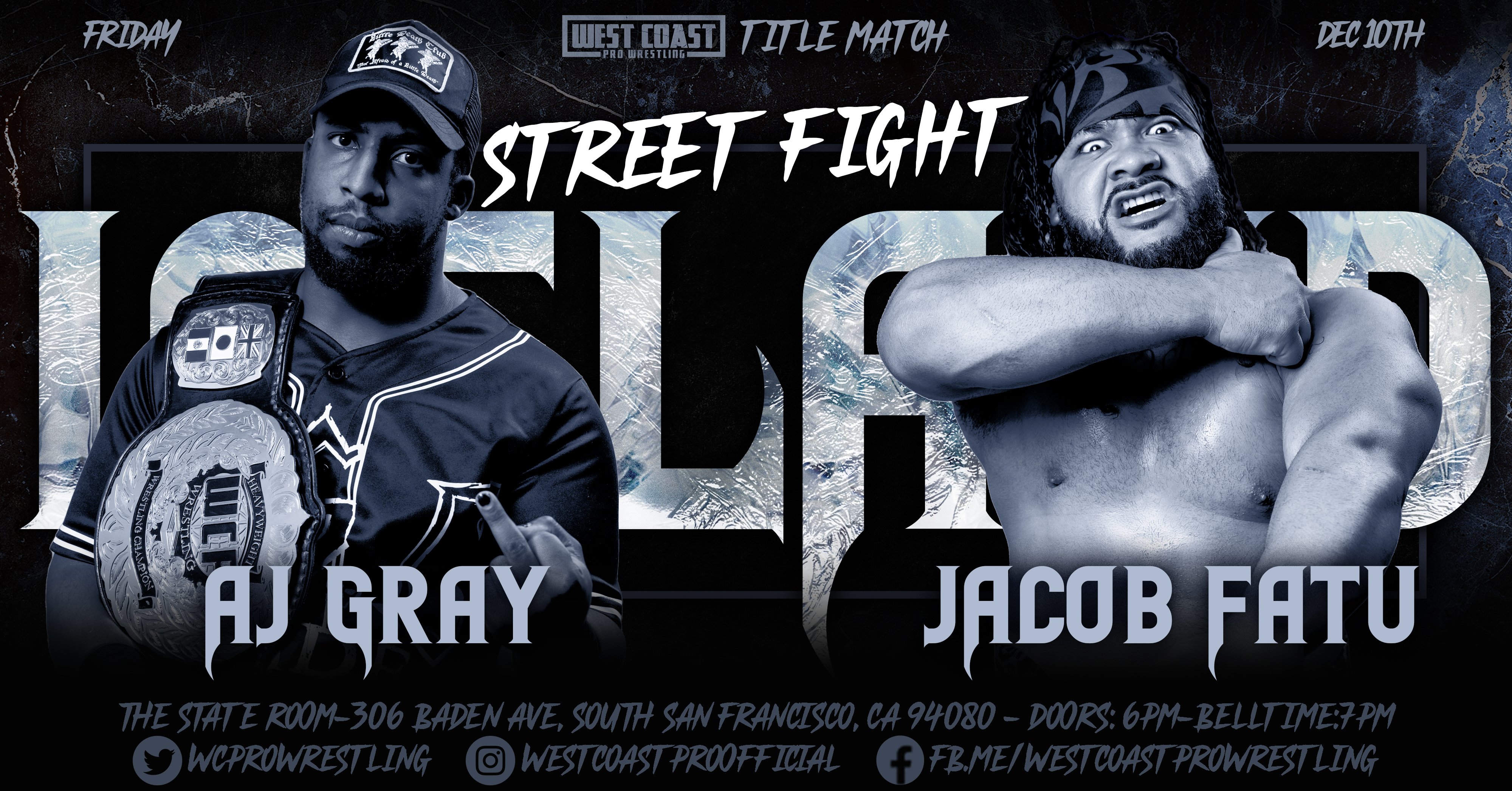 In the main event of the evening, West Coast Pro Champion AJ Gray looks to extend his title reign beyond his current 91-days when he locks horns with former MLW World Champion Jacob Fatu in a street fight. Both of these men are considered two of the hardest-hitting men in the sport, and with all rules out the window, this will be an absolute slobberknocker. AJ Gray has been on a relentless mission of brutality after losing the GCW World Championship in late 2019 and has left a graveyard of bruised bodies in his wake, while “The Samoan Werewolf’ is still seething from his recent title loss to Hammerstone in MLW that ended his World title reign at 819-days. Fatu defeated Gray in their only previous encounter this past summer at Invictus Pro Wrestling in New Jersey, but now AJ Gray has something to defend beyond just turf.

Stay tuned to the Last Word on Pro Wrestling for more on this and other stories from around the world of wrestling, as they develop. You can always count on LWOPW to be on top of the major news in the wrestling world, as well as to provide you with analysis, previews, videos, interviews, and editorials on the wrestling world. Catch West Coast Pro’s Iceland LIVE on IWTV on Friday, December 10, 2021, at 7 pm PST, 10 pm EST.