Ottawa, Ontario, Canada’s Capital City Championship Combat (C4) returns on Friday night with Better Watch Out, and it’s a huge night for one of Canada’s top indie promotions. Despite calling IndependentWrestling.tv (IWTV) their streaming home for a few years now, C4’s events always debuted at a later date. But on Friday night, Better Watch Out will mark C4’s LIVE debut on the network, with the event streaming live for the very first time, kicking off at 7:30 pm EST. Last month, C4 Champion “Speedball” Mike Bailey unified the C4 Underground Championship and is now a double-champion in Ottawa, as he looks for a big dual defense, plus Dark Order returns. Due to Covid travel issues, both Tony Deppen and Boomer Hatfield had to pull off the card late this week, so we’ll have to see who fills in the two spots on the card that have suddenly opened up. Here’s a look at the current card for Friday’s show. 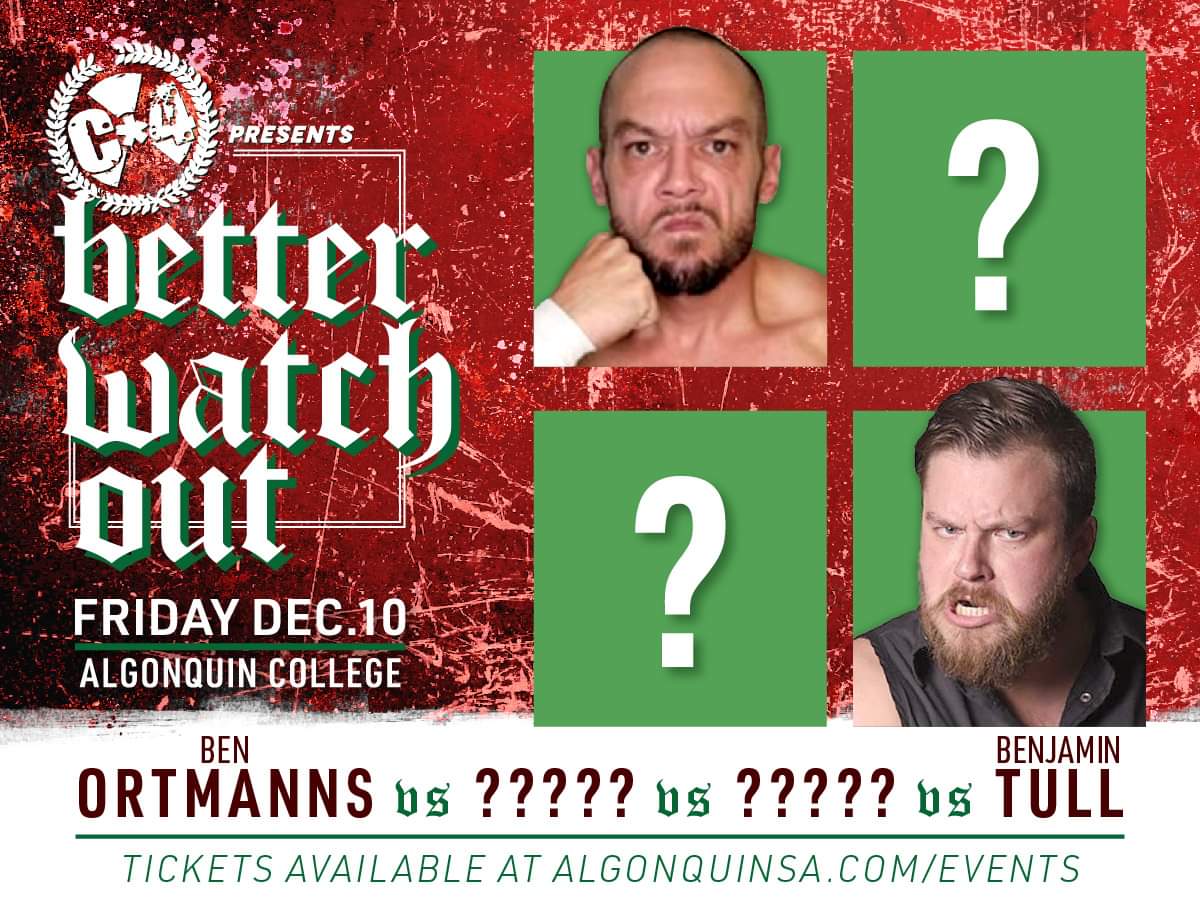 This four-way match was initially supposed to also include Boomer Hatfield and C4 rising star Junior Benito, but the loss of Hatfield and Tony Deppen re-arranged things. Benito is being moved to a singles match later in the card, opening up two wild card spots in this match that will be revealed at game time. “Big” Ben Ortmanns is a veteran in the Ontario scene who runs Cross Body Pro Wrestling Academy and has competed for the likes of Barrie Wrestling, Smash Wrestling, and Montreal’s International Wrestling Syndicate (IWS). Montreal’s Benjamin Tull is another big veteran, of the Quebec scene predominantly, who is also a former C4 Underground Champion and IWS World Champion. Whomever is added into this match on Friday night will have their work cut out for them as they face two bruising strikers. 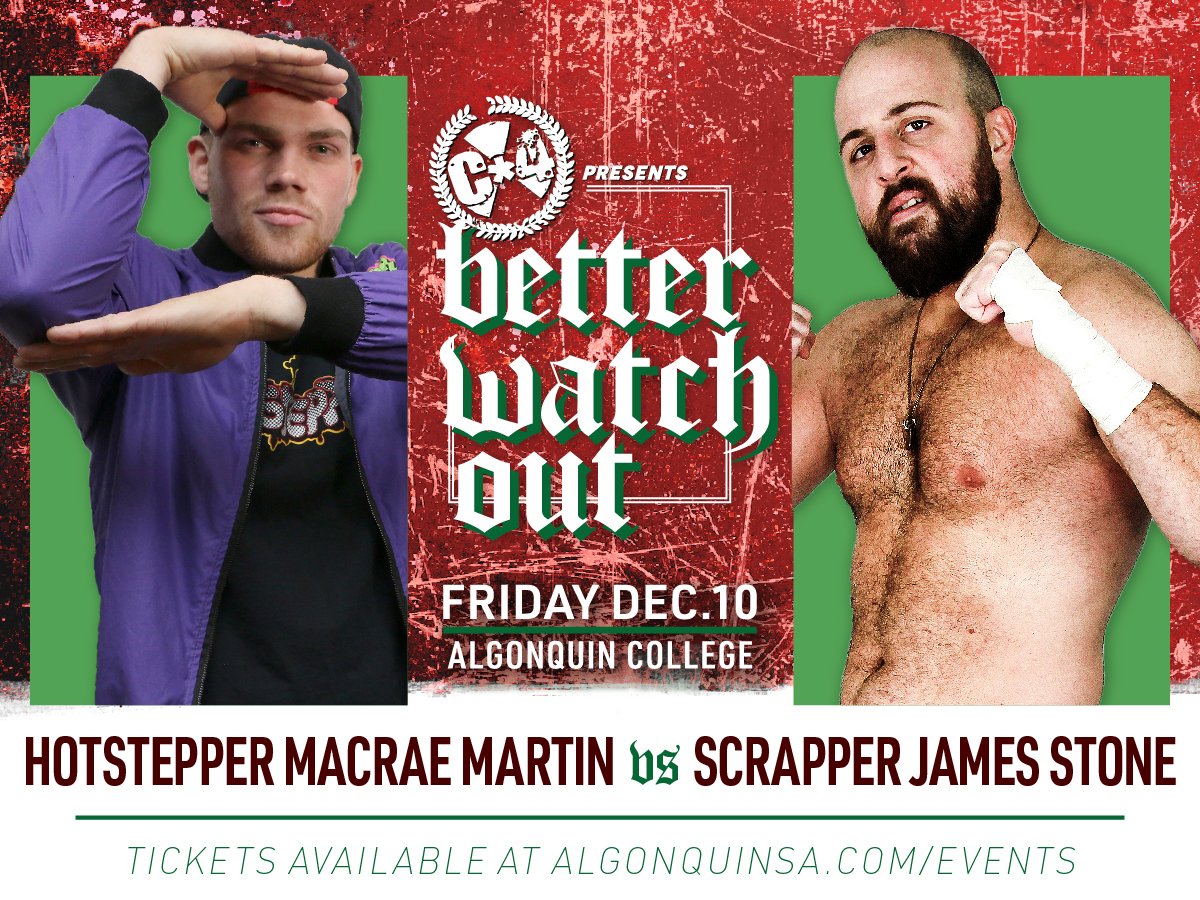 “Hoststepper” Macrae Martin is hoping for home-field advantage as the Ottawa dancer-turner-wrestler will look for a big win over another vicious veteran of the Quebec indies in “Scrapper” James Stone. Stone is an 18-year veteran who likes to trade hands who has been dominating the tag team ranks in Quebec the past decade in Heavy Metal Chaos with Alextreme, including two stints as C4 Tag Team Champions. 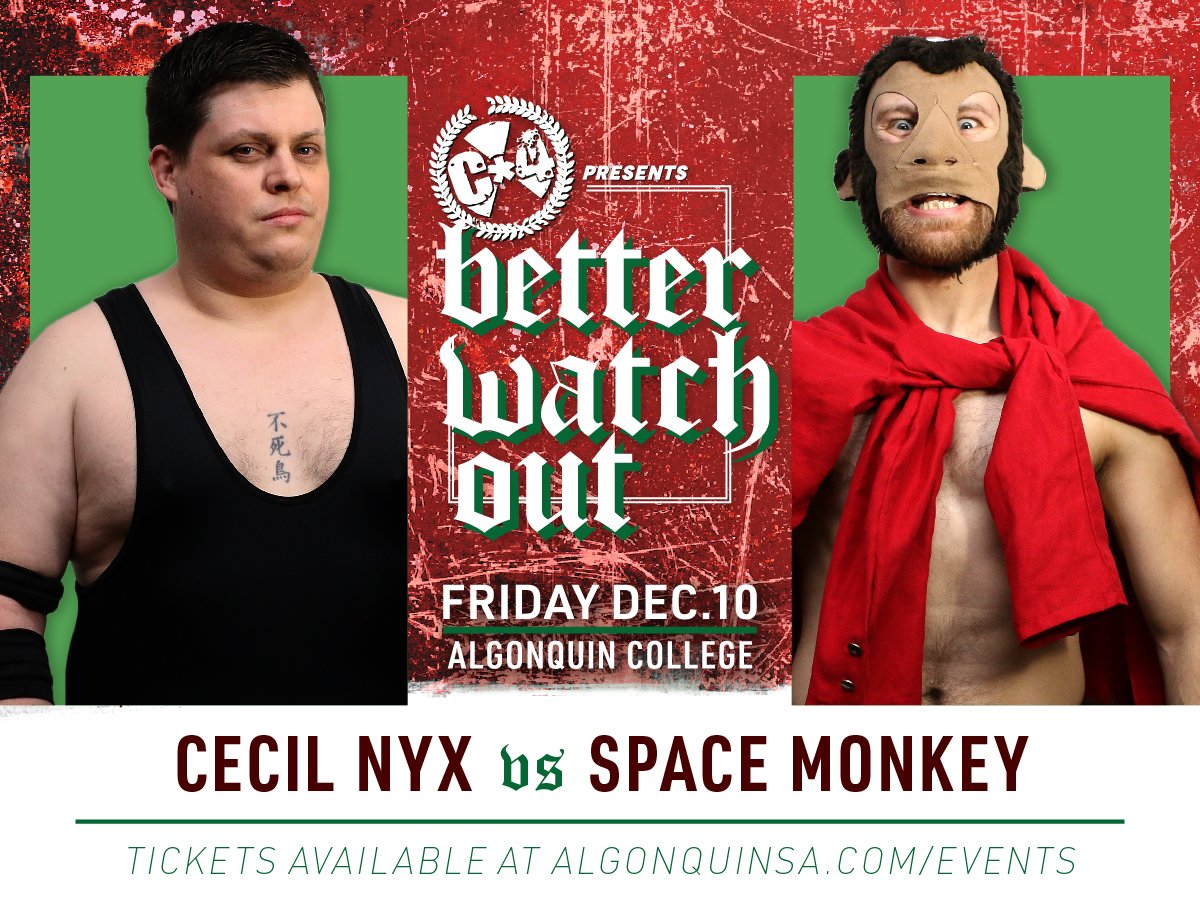 Cecil Nyx originally made his mark in the Quebec indie scene in Inter Species Wrestling (ISW) as Bastian Snow “The Catch-As-Catch Can Crustacean” before shedding the exoskeleton to reveal the meat of a man known as Cecil Nyx. Over the past decade he’s been a fixture not only in C4, but in Montreal’s BATTLWAR, and other Ontario indies like Acclaim Pro Wrestling (APW), Smash Wrestling, and 365 Pro (formerly PWA). He also competed for Game Changer Wrestling (GCW) in the 2019 Clusterf**k Battle Royal at Joey Janela’s Spring Break in New Jersey. He’ll be facing off against one of Canada’s most unique grapplers in Space Monkey, who is still feeling the emotional loss of the disbanding of his long-standing tag team Space Pirates earlier this year. Space Monkey was having great success in the U.S. indies just prior to the Covid pandemic, so he’ll be looking to get his monkey poop together to once again prove he’s the best primate in the sport. 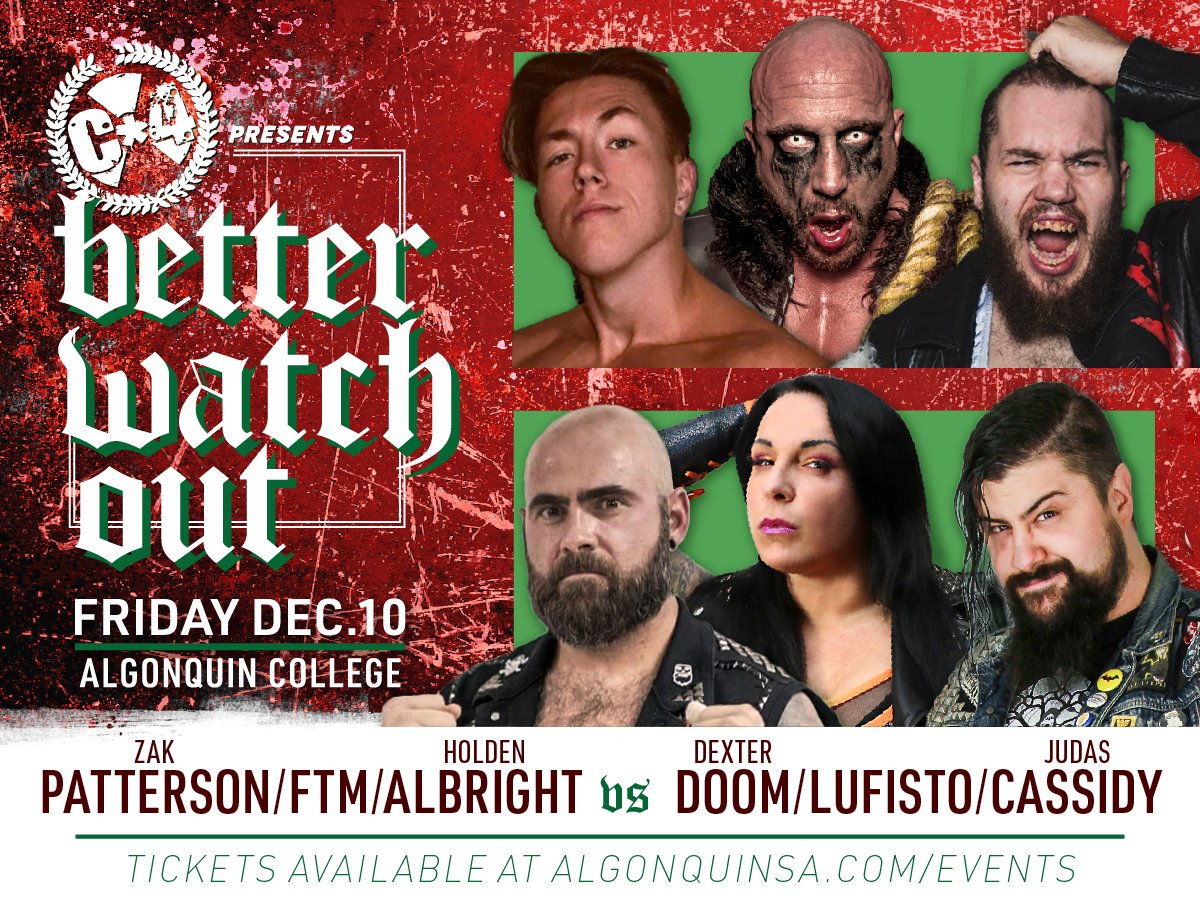 Two of the top veterans in the Canadian indie scene lead two teams into combat on Friday night in Canada’s capital, and the end result could be a lot of violence. On one side, the menacing FTM (Franky The Mobster), “The Beast King” and a former IWS World Champion, Smash Champion, and CZW Iron Man Champion lead former Alpha-1 Outer Limits Champion Holden Albright and rookie wunderkind Zak Patterson. On the other is the Canadian matriarch of indie wrestling, “The Wounded Owl” LuFisto, a true pioneer in intergender wrestling who is a former CZW Iron Man Champion and one of the longest-reigning Shine Champions in history, who is teaming up with 22-year Quebec indie veteran Judas Cassidy and the vicious “Dark Horse” Dexter Doom. This match has all the ingredients for an explosive war inside the C4 ring. 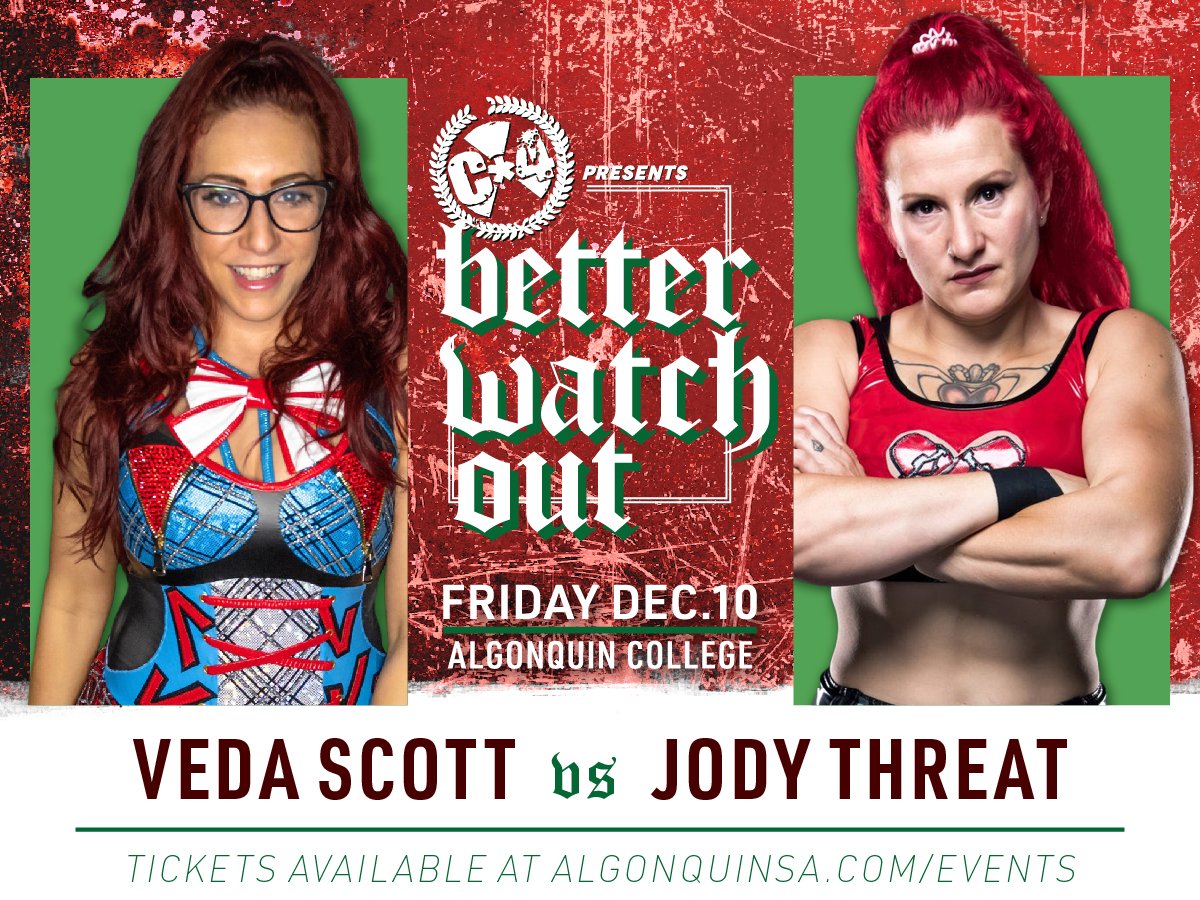 Veda Scott may as well have dual citizenship at this point (if not, let’s start a petition to grant her Canadian citizenship!) as she returns to C4 in singles action against one of Canada’s top indie stars of the past few years, Jody Threat. Threat has made her presence in the U.S. indies quite well known, competing for the likes of GCW, IWA Mid-South, Beyond Wrestling, Black Label Pro, SHIMMER, and more, as she climbs the ranks of North American pro wrestling. 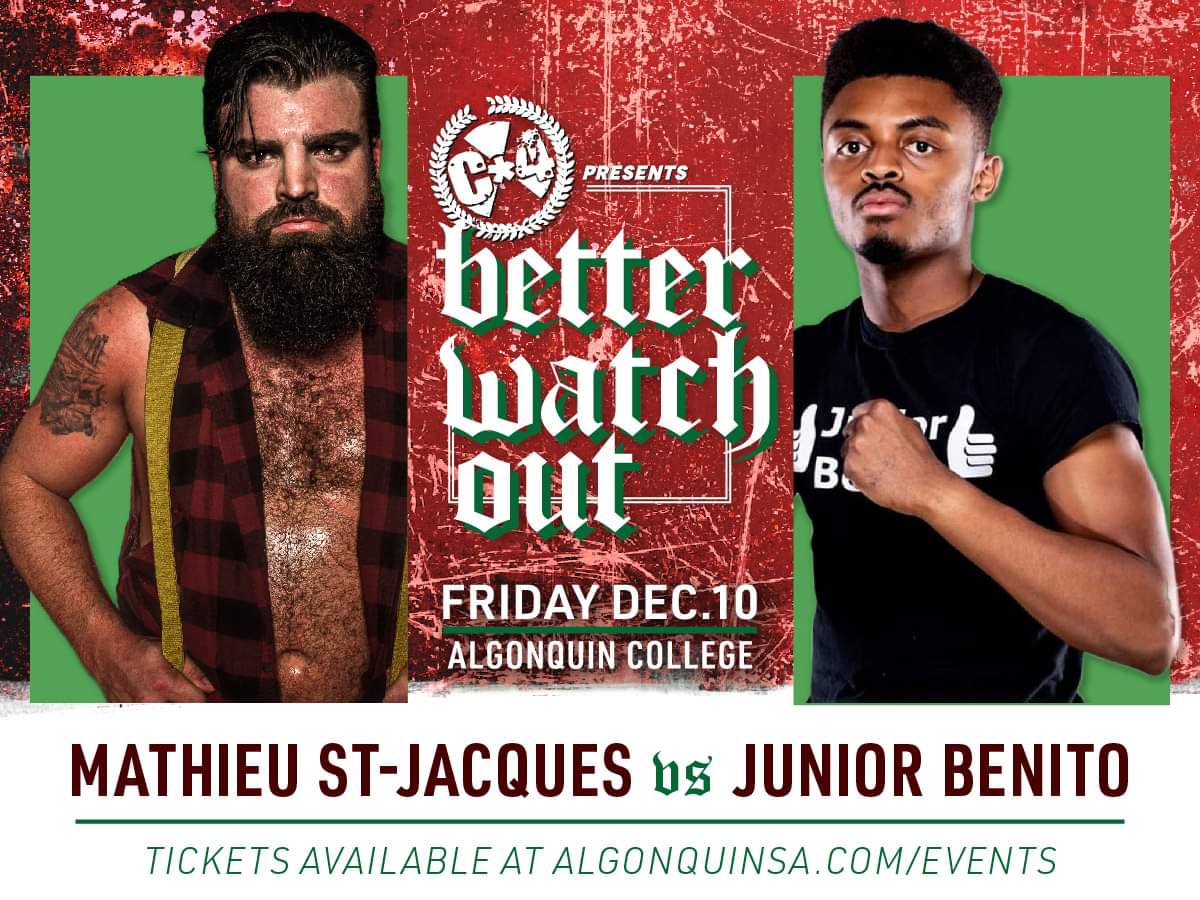 Mathieu St-Jacques is known for being part of a rough and tumble tag team, the monstrous Le Tabarnak de Team, who are the current 3x C4 Tag Team Champions and 4x IWS Tag Team Champions. He’s no slouch in singles either, as the rugged French-Canadian is a former C4 Champion in his own right.  Junior Benito has been one of Ontario’s best-kept secrets the past few years as he’s made his own ascent in the game. He’s been facing top world talents already such as “Speedball” Mike Bailey and Josh Alexander in the past year, and just last month drew high praise from his C4 opponent Davey Richards after their spirited clash at C4 Never Say Never. Another big test for Benito, who is most certainly poised to be one of Canada’s breakout indie stars of 2022. 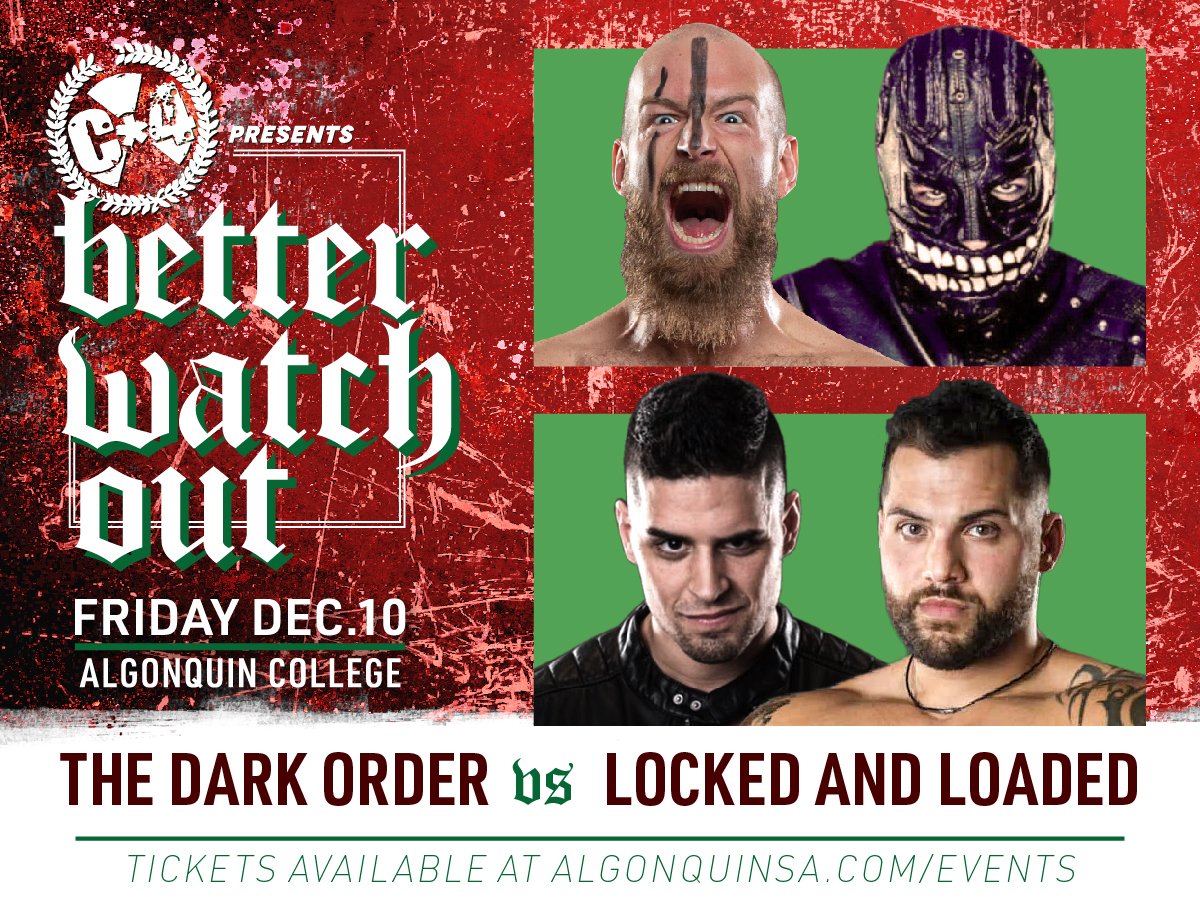 The Dark Order’s Evil Uno & Stu Grayson (formerly known as Super Smash Bros on the indies pre-AEW) made their return to C4 this past September, and they return on Friday night to face another of Canada’s top tag teams. Evil Uno is a former C4 Champion, and together with Grayson, have held tag team gold around North America, including PWG, CHIKARA, Alpha-1, and more. Locked & Loaded is a formidable duo featuring Mark Wheeler and Jessie V who have been competing together since 2018. Wheeler has also had strong singles showings across Canada and in the U.S., where he was a regular with Freelance Wrestling, Warrior Wrestling, Glory Pro, and others pre-Covid. Four of Canada’s best will make for some fast-paced tag team action. 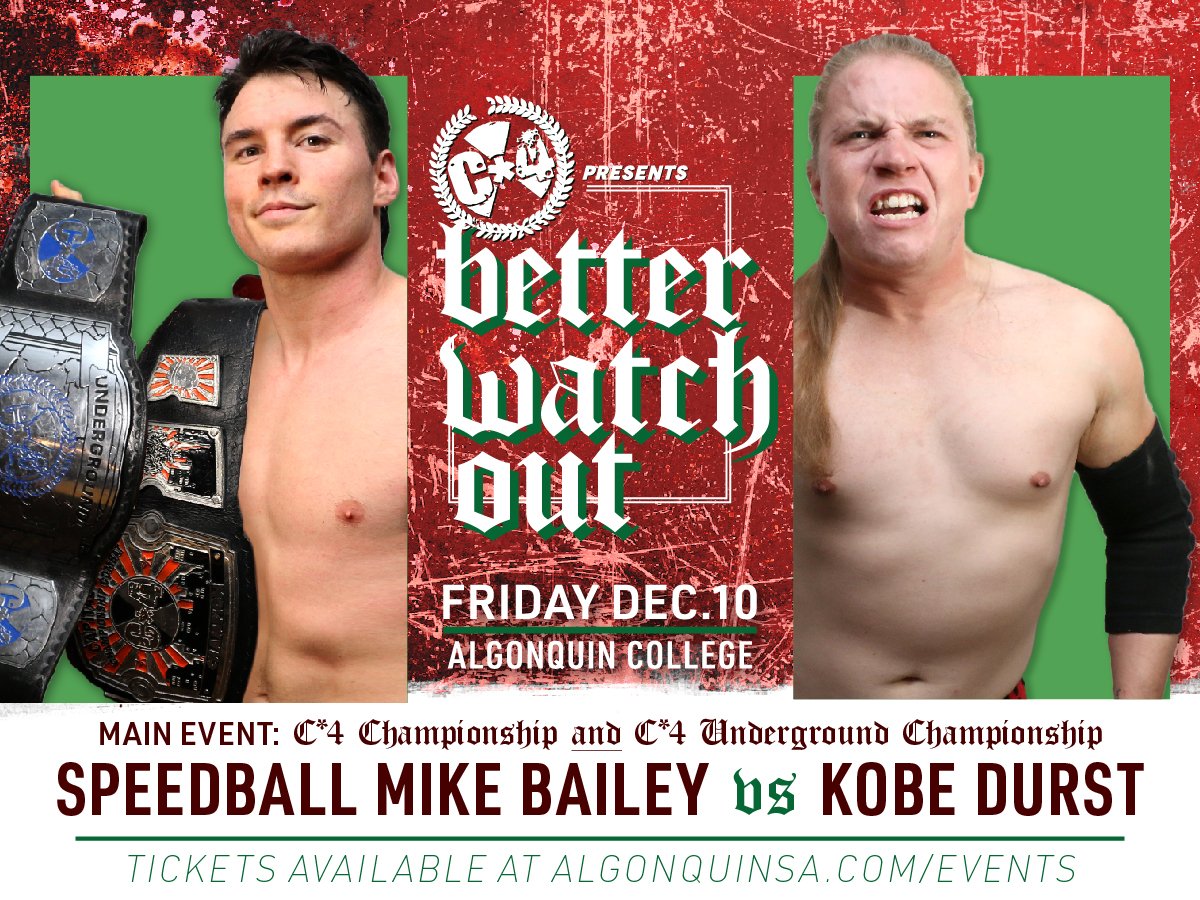 C4’s dual champion “Speedball” Mike Bailey continues to dominate his home and native land as he prepares to re-enter the U.S. as one of the latest signings for IMPACT Wrestling, but first, he’ll have to put both titles on the line on Friday night against “Diamond Tiger” Kobe Durst. Durst has been one of Ontario’s most decorated stars in the past few years, as a 3x Alpha-1 Alpha Male Champion, C4 Champion, and C4 Underground Champion, and prior to COVID, Durst was also exploding into the U.S. indie scene. He was Black Label Pro Heavyweight Championship for 221-days for much of 2019, after holding the BLP Midwest Championship for 122-days prior. Two Canadian veterans with explosive arsenals, this will be one helluva main event.

Stay tuned to the Last Word on Pro Wrestling for more on this and other stories from around the world of wrestling, as they develop. You can always count on LWOPW to be on top of the major news in the wrestling world, as well as to provide you with analysis, previews, videos, interviews, and editorials on the wrestling world. Catch C4’s back archive at IndieWrestling.tv. as well as catch C4 ‘Better Watch Out’ LIVE for the first time on Friday night at 7:30 pm.